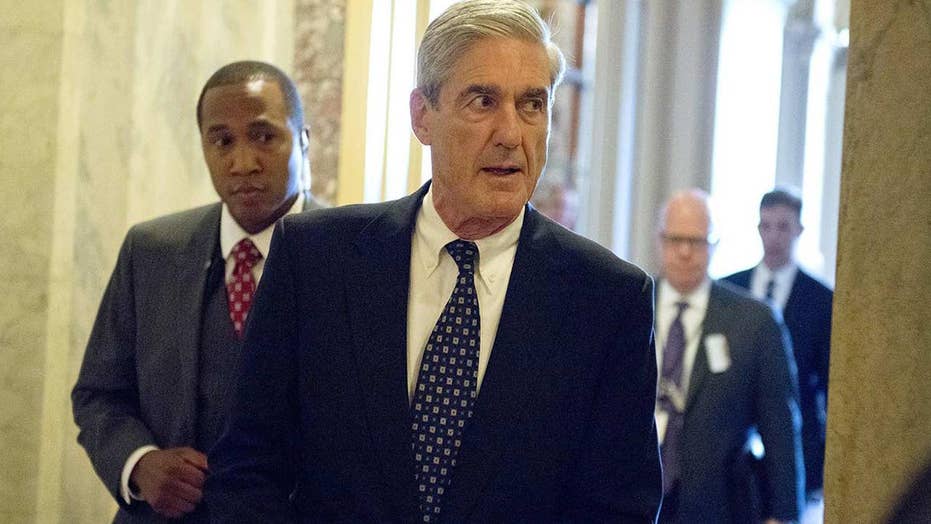 Rep. Todd Rokita of Indiana has introduced a resolution calling for an end to Mueller's investigation within 30 days of the resolution's passage. #Tucker

Special Counsel Robert Mueller has officially led the investigation into Russian meddling in the 2016 election and possible collusion with President Trump’s campaign for one year.

Read on for a refresher on all the many twists and turns to date, from those who have been charged to controversies surrounding the probe.

Mueller was selected by the Justice Department to oversee the investigation into Russia’s meddling in the 2016 election and any collusion with the Trump campaign on May 17, 2017.

The appointment came after a growing outcry -- specifically from Democrats -- for someone outside the Justice Department to handle the probe. Attorney General Jeff Sessions, one of Trump’s early backers, had already recused himself from the investigation.

Multiple former campaign officials have been charged in Mueller’s probe, as well as several Russian officials and entities. However, none of the Trump associates face charges directly related to collusion with Russia.

Paul Manafort, Trump’s former campaign manager, was indicted in October 2017 on charges that include conspiracy and making false statements. Additional charges, including tax evasion and bank fraud, were brought against him in February. He has pleaded not guilty.

Manafort sought to have his case dismissed as he accused Mueller’s team of exceeding its authority because the case against him was unrelated to Russian election interference. However, a federal judge ruled in May that Mueller does have the authority to prosecute.

Richard Gates, Manafort’s business associate and former deputy campaign manager, was hit with the same charges. However, he pleaded guilty to federal conspiracy and false statement charges in February. Like Manafort, Gates helped wrangle delegates at the 2016 Republican convention in Cleveland. He later helped start the nonprofit America First Policies, which was created to advance the White House’s agenda.

WHO’S BEEN CHARGED IN THE RUSSIA PROBE SO FAR?

Michael Flynn, the administration’s short-lived national security adviser, pleaded guilty in December 2017 to lying to the FBI about certain conversations he had with a former Russian ambassador and giving false statements about two Trump transition team members involved in his outreach.

In February and May, Mueller’s team asked for a delay in the sentencing of Flynn, citing the “status” of the investigation.

George Papadopoulos, a foreign policy adviser for Trump’s presidential campaign, pleaded guilty in October 2017 to lying to investigators. According to court filings, Papadopoulos was not truthful about his relationship with an “overseas professor” who had “substantial connections to Russian government officials.” That professor, according to prosecutors, told Papadopoulos he had “dirt” on Hillary Clinton, Trump's Democratic campaign rival.

Papadopoulos also told an Australian diplomat in Britain that Russia had dirt on Clinton after a night of drinking. That meeting, and what investigators learned about it, helped provide the foundation for the Russia investigation, according to The New York Times.

Additionally, Richard Pinedo, a California man who sold bank accounts to Russians meddling in the election, pleaded guilty in February to using stolen identities to set up the accounts. The U.S. government said Pinedo was not aware he dealing with Russians when he sold the accounts, however.

Alex van der Zwaan, a Dutch attorney, is the first person to be sentenced in the probe. He admitted to lying to investigators about his communications with Gates and another person, according to court documents. In April, van der Zwaan was sentenced to 30 days in prison and issued a $20,000 fine. Van der Zwaan is the son-in-law of Russian oligarch German Khan.

Separate from the Trump campaign officials, meanwhile, a grand jury in February indicted 13 Russians and three Russian companies for allegedly interfering in the 2016 presidential election, as part of the probe. One company has since pleaded not guilty.

While Mueller has kept a tight lid on his investigation, there have been several controversies surrounding his team.

In May, a federal judge accused Mueller’s team of aiming for “unfettered power” in order to take down Trump and suggested the team had lied in the investigation.

When it comes to Flynn, a new report showed former FBI Director James Comey told Congress he did not believe Flynn intentionally lied about his talks with the Russian ambassador. He said agents who interviewed Flynn “discerned no physical indications of deception.”

Who are the key characters in the federal investigation into Russia’s attempt to meddle in the 2016 U.S. election

“They saw nothing that indicated to them that he knew he was lying to them,” Comey told members of the House Intelligence Committee, according to a committee report.

These circumstances have raised questions about the plea. Supporters of Flynn, including his siblings, have encouraged him to withdraw his guilty plea after the judge in his case ordered Mueller’s team to hand over to Flynn’s lawyers “any evidence in its possession that is favorable” to Flynn. However, Robert Stahl, a white-collar criminal defense attorney in New York and New Jersey, told Fox News withdrawing a guilty plea “is extremely rare and very difficult.”

The start of it all

How the investigation got started has also been scrutinized. The sensitive memos Comey leaked to the media that detailed his conversations with Trump indeed served as the catalyst for Mueller to be appointed as special counsel, sources told Fox News.

Comey, too, said during a June 2017 Senate testimony that he gave the memos to a friend who would leak them because he “thought that might prompt the appointment of a special counsel.” That friend, Columbia law professor Daniel Richman, had worked for Comey’s FBI as an unpaid “special government employee.” Comey has since been interviewed by the DOJ inspector general about his handling of the memos.

Mueller’s team faced allegations of bias after it was revealed that the majority of its members are registered Democrats or have made political donations to liberal candidates and groups. In fact, at least 13 people on the 17-member team are registered as Democrats. At least nine, including some of the registered Democrats, have donated to Democratic candidates and causes, such as Hillary Clinton, the Democratic National Committee and former President Barack Obama.

In March, Trump accused the team of having “13 hardened Democrats, some big Crooked Hillary supporters and Zero Republicans.”

“Does anyone think this is fair?” Trump asked.

“If there were conflicts that arose, because of Director Mueller or anybody employed by Director Mueller, we have a process within the [Justice Department] to take care of that,” Deputy Attorney General Rod Rosenstein previously told Fox News.

Justice Department policy “prohibits the consideration of political affiliation in personnel matters involving career employees” -- meaning, an attorney on detail has a right to his or her own political beliefs.

Improper surveillance techniques were used by the Justice Department and FBI in the Russia investigation, Republican lawmakers alleged in a controversial memo in February.

The four-page memo, put together by staff of House Intelligence Committee chairman Devin Nunes, R-Calif., said a salacious but unverified dossier was key for the FBI to obtain a FISA warrant to spy on members of Trump’s team, including former Trump adviser Carter Page. Page has not been charged in the Mueller investigation.

However, Democrats on the committee denounced the memo and released their own rebuttal.

Two former members of Mueller’s team raised eyebrows after their text messages regarding Trump, Clinton and the investigation were released. In the messages, Peter Strzok and Lisa Page, who were romantically involved, bashed Trump and discussed concerns about being too tough on Clinton during the investigation into her private email server. The pair exchanged some 50,000 text messages throughout the presidential election and first year of the Trump administration, many of them with anti-Trump sentiments.

Strzok is a veteran counterintelligence agent who was assigned to both the investigation into Clinton’s emails and Mueller’s probe into possible collusion. He was reassigned to the FBI’s human resources division in August 2017. In a text message to Page, Strzok said he was hesitant to join Mueller’s team because of his “gut sense and concern there’s no big there there.”

Strzok also had a personal relationship with the judge who initially presided over Flynn’s case but recused himself just days after the former adviser pleaded guilty.

Page, too, served on Mueller’s team -- albeit briefly before returning to the FBI. In May, it was announced that Page had resigned from the FBI to “pursue other opportunities.”

Mueller and Rosenstein were reportedly told in July 2017 about their text messages.

House Minority Leader Nancy Pelosi attempted to use the special prosecutor to cash in, claiming he was fired. The subject line of a fundraising email encouraging people to donate to the Democratic Congressional Campaign Committee (DCCC) read “Mueller FIRED.”

But the body of the email acknowledged that Mueller still had his job.

“I’m so furious I can barely write this email. President Trump is inches away from firing Robert Mueller and derailing the entire Russia investigation,” Pelosi said in the email.

Trump has not yet been interviewed by Mueller or his team yet, but questions investigators have wished to ask the president have been leaked. The questions request information related to Comey, McCabe and his team’s connections to Russian officials.

Trump has indicated he would be willing to sit down with Mueller for an interview. Rudy Giuliani, one of the latest additions to the president’s legal team, has taken over talks with Mueller’s team about an interview.

WHAT COULD HAPPEN IF TRUMP IS SUBPOENAED BY MUELLER?

Ed Henry reports on latest comments from the president.

Giuliani said his objective “is to end this investigation and distraction from the critical issues facing our president as quickly as possible. The president has produced 1.2 million documents that is historically unprecedented. We believe it presents overwhelming proof that the president did not collude with regard to the 2016 election.”

“If anything else is needed, we will consider it if there is an open mind as to the merits,” he said, referring to the possibility of an interview.

Giuliani also told Fox News on Wednesday that Mueller told Trump’s team two weeks ago that he will follow DOJ guidance that a sitting president cannot be indicted.

Mueller already had told Trump’s legal team he is not a target of the investigation but is a subject -- which could change at any time. Mueller has suggested he could subpoena the president if needed, Trump’s former lead attorney John Dowd told The Associated Press.

Trump has repeatedly denied any wrongdoing, calling the investigation a “witch hunt.”

The investigation into Michael Cohen could also throw a wrench into the Mueller probe. Cohen, 51, is the president's personal attorney who previously worked for the Trump Organization. He is under a criminal investigation as part of a grand jury probe into his personal conduct and business dealings, including a $130,000 payment made in 2016 to adult film star Stormy Daniels for her silence regarding an alleged sexual encounter with Trump in 2006.

In April, the FBI raided Cohen’s home, office and hotel room and seized a number of documents. Investigators also sought bank records, information on Cohen’s dealings in the taxi industry and his communications with the Trump campaign.

Cohen has not been charged with anything. Trump said the raid made attorney-client privilege “a thing of the past.”

The House Intelligence Committee said in April it found “no evidence” of collusion. However, the heavily-redacted report did “find poor judgment and ill-considered actions by the Trump and Clinton campaigns.” Senate Intelligence Committee leaders, though, on Wednesday backed the original intelligence assessment finding that Russia tried to interfere in the elections, to boost Trump.