Mueller’s office unsealed a superseding indictment against the 68-year-old Manafort, including conspiracy against the United States, conspiracy to launder money, failing to register as an agent of a foreign principal, giving false and misleading Foreign Agents Registration Act statements and providing other false statements.

Meanwhile, Gates pleaded guilty Friday afternoon to federal conspiracy and false-statement charges at a Washington courthouse, in a strong indication he plans to cooperate with the probe.

As Gates entered his plea, Manafort issued a brief statement maintaining his innocence and swiping at his former associate.

“Notwithstanding that Rick Gates pled today, I continue to maintain my innocence," Manafort said in a statement. "I had hoped and expected my business colleague would have had the strength to continue the battle to prove our innocence. For reasons yet to surface he chose to do otherwise."

Both Gates and Manafort were in business together and worked on the Trump campaign.

A federal grand jury in Virginia on Thursday had returned a 32-count indictment against Gates and Manafort on tax evasion and bank fraud charges.

"This does not alter my commitment to defend myself against the untrue piled up charges contained in the indictments against me,” Manafort said of Gates' plea.

A superseding criminal complaint says Gates is charged with conspiracy against the United States between 2006 and 2017. 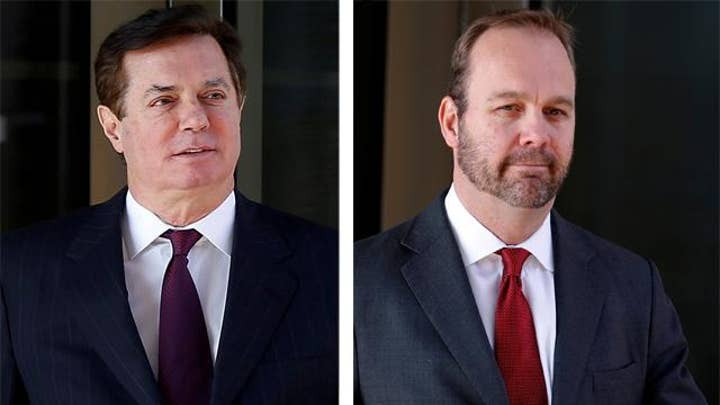 Gates is also accused of making a false statement Feb. 1 to the Special Counsel’s Office and the FBI about a March 2013 meeting between Manafort, a lobbyist and a member of Congress.

Gates could become a key cooperator for Mueller with intimate knowledge of Manafort's years of political consulting work in Ukraine, as well as other events that have sparked the interest of federal investigators.

United States District Judge Amy Berman Jackson said Gates could face 48 to 71 months in prison and a fine of $20,000 to $200,000. The plea documents say Gates “shall cooperate fully, truthfully, completely, and forthrightly” with the special counsel’s office.

According to the complaint, Gates and Manafort worked as unregistered agents of the government of Ukraine, generating tens of millions of dollars in income.

The White House on Friday distanced itself from Gates.

“This indictment has nothing to do with the White House or the president,” deputy White House communications director Mercedes Schlapp said Friday on Fox News. “As you know, we have been cooperative with the special counsel. And as we continue to see, there's no evidence of collusion, no evidence of wrongdoing. “

Prosecutors accuse Gates and Manafort of hiding payments from Ukraine by laundering money through “scores of United States and foreign corporations, partnerships, and bank accounts.”

Millions were funnelled into foreign companies and bank accounts in Cyprus, Saint Vincent and the Grenadines and the Seychelles, the complaint says. But the duo falsely claimed they had no foreign bank accounts, prosecutors said.

The complaint says Gates and Manafort were required under the law to report their work for foreign governments but did not do so.

Prosecutors also accuse Gates and Manafort of responding with a "series of false and misleading statements” when the Department of Justice asked about their activities in 2016.

Manafort used his hidden overseas wealth to enjoy a lavish lifestyle in the United States, without paying taxes on that income, the complaint says. Gates is also accused of using money from offshore accounts to pay for personal expenses, including his mortgage, children’s tuition and interior decorating of his Virginia residence.

Gates transferred more than $3 million from offshore accounts to other accounts under his control, according to the complaint.

It says more than $75 million flowed through Gates and Manafort’s offshore accounts.

It would mark the fifth publicly known guilty plea in the special counsel probe into possible collusion between the Trump campaign and the Kremlin during the 2016 campaign.

Gates had access at the highest levels of the campaign at the same time that Manafort, Donald Trump Jr. and Jared Kushner met with a team of Russians in Trump Tower in June 2016.

He was also in the top ranks of the campaign when then-Sen. Jeff Sessions held a pair of undisclosed meetings with Russian ambassador to the U.S. Sergey Kislyak.

For a few months in 2016, Gates was indispensable to Trump, leading the ground effort to help Trump win the Republican nomination and flying from state to state to secure Republican delegates in a scramble that lasted all the way until the Republican National Convention in Cleveland.

But his power and influence waned once Trump fired Manafort in August 2016.

The plea also comes quickly on the heels of a stunning indictment last week that laid out a broad operation of election meddling by Russia, which began in 2014, and employed fake social media accounts and on-the-ground politicking to promote the campaign of Donald Trump, disparage Hillary Clinton and sow division and discord widely among the U.S. electorate.

Gates initially pleaded not guilty and has been facing up to 12.5 years in jail -- based on a 12-count indictment handed up in October accusing him and Manafort of acting as unregistered foreign agents and conspiring to launder millions of dollars they earned while working on behalf of a pro-Russian Ukrainian political party.