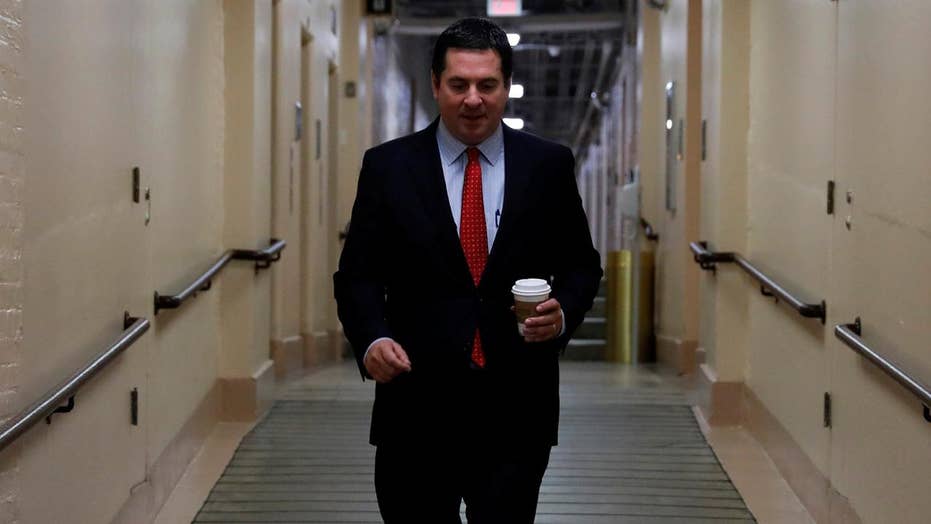 The memo, put together by House Republicans, shows improper surveillance techniques used by the Department of Justice and the FBI in the Russia investigation, GOP lawmakers said.

Democrats have dismissed the memo, arguing that it was selectively edited by Republicans to push a narrative that the Russia investigation is biased against the president. They have their own rebuttal memo they hope to soon release.

Here’s what we know about the memo and its connection to the Russia investigation.

So what is this memo?

The four-page memo, put together by the staff of House Intelligence Committee chairman Rep. Devin Nunes, R-Calif., reveals improper use of surveillance by the FBI and the Justice Department in the Russia investigation, GOP lawmakers said.

The memo did “raise concerns with the legitimacy and legality of certain DOJ and FBI interactions with the Foreign Intelligence Surveillance Court (FISC) and represent a troubling breakdown of legal processes established to protect the American people from abuses related to the FISA process,” it said.

Some key points of the memo include:

The House Intelligence Committee voted to release the classified memo on what Rep. Adam Schiff, D-Calif., said was a party-line vote. Trump later approved its declassification.

Republicans who support the release of the memo do so in the interest of "transparency" for "anyone who cares about America and our democratic system of government," Rep. Matt Gaetz, R-Fla., said in a letter signed by 65 other lawmakers.

What was the argument against releasing it?

Democrats cautioned against releasing the memo, calling into question its factual accuracies and warning that it could be detrimental to national security. And after its release, they said it was “misleading” and its importance “overblown.”

“The most important thing we’ve learned from these GOP talking points is that the White House and its Republican allies are determined to ‘undermine’ a badly-needed investigation into Russia’s election meddling,” Sen. Bob Menendez, D-N.J., said.

“The Nunes memo is partisan and misleading, simple as that,” said Sen. Chuck Schumer, D-N.Y. “To use it as pretext for firing Deputy AG Rosenstein, Special Counsel Robert Mueller or other DOJ leadership would be viewed as an attempt to obstruct justice in the Russia investigation.”

How has Trump reacted to the memo?

Trump declassified the memo without redactions on Friday.

“A lot of people should be ashamed of themselves and much worse than that,” he said.

Trump also claimed that "this memo totally vindicates 'Trump' in probe. But the Russian Witch Hunt goes on and on."

In a statement, the FBI said it has “grave concerns” with the memo.

“With regard to the House Intelligence Committee’s memorandum, the FBI was provided a limited opportunity to review this memo the day before the committee voted to release it,” the statement said. “As expressed during our initial review, we have grave concerns about material omissions of fact that fundamentally impact the memo’s accuracy.”

Justice Department officials had asked the White House to block the memo's release.

But what is so controversial about the FISA surveillance program in the first place?

Section 702 of the Foreign Intelligence Surveillance Act (FISA) allows intelligence officials to oversee communications of foreigners outside of the U.S. without a warrant. Congress reauthorized Section 702 earlier this year – reigniting a debate over the controversial program.

Critics argue that although the law cannot be used to target Americans, U.S. citizens are often swept up in the data collection – which can be viewed without a warrant.

While that particular section of FISA wasn’t used to obtain the warrant detailed in Nunes’ memo, lawmakers still point to it as a “dangerous” example of violations against Americans’ Fourth Amendment rights.

Section 702 “is far more dangerous. It permits the FBI and other agencies to conduct unconstitutional, warrantless searches on millions of innocent Americans (whose communications were incidentally collected while targeting foreigners overseas),” Rep. Justin Amash, R-Mich., said in a series of tweets.

“If the speaker and others believe abuses are occurring the execution of one section of FISA, then why would they insist on reauthorizing another section of FISA (702) that has far greater potential for abuse?”