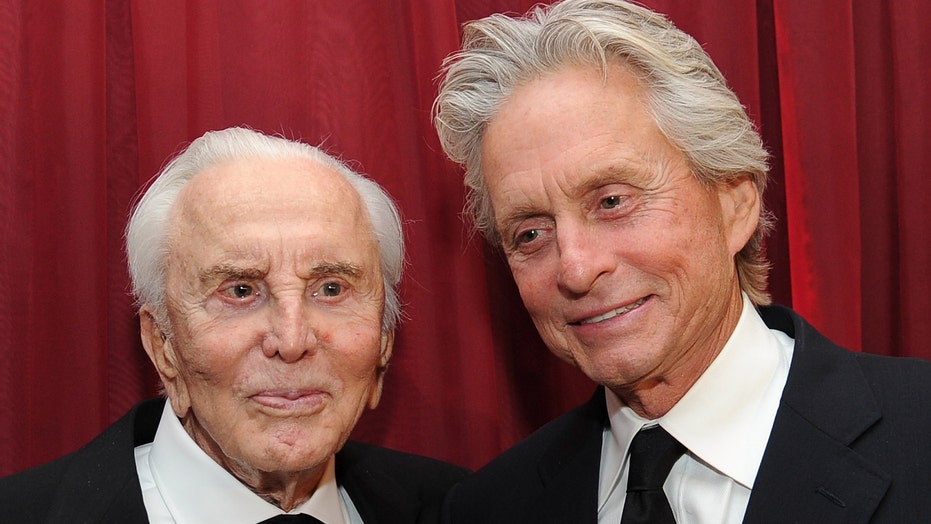 Kirk Douglas wasn't just an award-winning actor, he was also a family man.

Douglas was married twice -- once to actress Diana Douglas and again to Anne Buydens, to whom he was married when he died. They've been together for 65 years.

Let's take a look back at the "Spartacus" star's rich family life.

Kirk Douglas, star of such screen hits as "Champion" and Diana Douglas circa 1950.

According to The Royal Gazette, Douglas met a woman named Diana Dill while they studying acting together. In 1943, she appeared on the cover of Life Magazine and Douglas insisted to his friends that he'd marry her. Just months later, the two wed. Kirk and Diana divorced in 1951.

Kirk Douglas with his son Michael, who would also go on to become a legendary actor. (Photo by Sunset Boulevard/Corbis via Getty Images)

Kirk and Diana welcomed a second child, Joel, in 1947. Joel also went into show business, but he worked behind the scenes as a producer rather than in front of the camera.

After Kirk's 1951 divorce from Diana, he eventually met Anne Buydens. According to Town & Country, the two were introduced by a mutual friend, but she turned down his initial romantic advances. The relationship remained platonic for a time, but one thing lead to another, and the pair married in 1954 and remained married until his death.

In the year following their marriage, Kirk and Anne welcomed a baby boy, Peter. Peter would follow in Joel's footsteps and work as a producer in Hollywood, earning an Emmy Award.

Kirk's fourth child, Eric, was born in 1958. Eric followed his father's career more closely, opting to appear in films and television. Tragically, Eric passed away in 2004 of an accidental drug overdose, according to the Los Angeles Times.

Kirk Douglas and his wife Anne at the premiere of "Spartacus." (Getty)

Perhaps one of Kirk's most famous roles was the titular character in "Spartacus," which was released in 1960. Kirk and Anne enjoyed a date night at the premiere.

Kirk Douglas his wife Anne and their two children Eric and Peter in Monaco in 1967. (Photo credit should read AFP/AFP via Getty Images)

Ever the family man, Kirk was able to get away from Hollywood for a trip to Monaco in1967. He was accompanied by Anne, Peter and Eric.

In 1978, one of Kirk's grandchildren, Cameron, was born. Like his father Michael and his grandfather, Cameron would go on to become an actor.

Douglas and his four children were kept busy within the film industry but still managed to find time for one another.

After the end of Kirk's son Michael's first marriage, he eventually met actress Catherine Zeta-Jones, who he married in 2000.

2003 was a special year for the Douglas family, as the film "It Runs in the Family" was released. The film starred Kirk, Michael and Cameron, as well as Kirk's ex-wife Diana. Additionally, Joel worked as a producer on the film.

In 2018, Kirk took the stage at the 2018 Golden Globe Awards to present an award with daughter-in-law Zeta-Jones, 50. He also joined her, Michael and Cameron at Michael's Hollywood Walk of Fame ceremony.

In December of 2019, Kirk hit 103 years old. Making his final birthday extra special was the announcement that Michael had received a Golden Globe nomination for his work in "The Kominsky Method." Michael posted a photo to Instagram to wish his father a happy birthday and the Hollywood Foreign Press Association "for making my Dad proud."