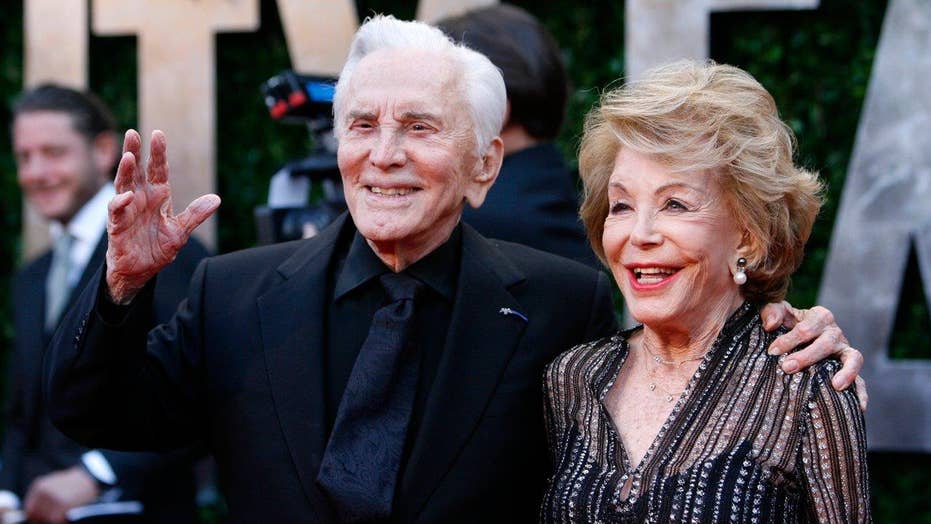 Fox411: Kirk and Anne Douglas open up about their decades-long marriage

When Kirk and Anne Douglas released a new book that revealed intimate letters they shared over the years, readers were shocked to discover that Kirk's longtime wife was not only aware of his infidelity, but she willfully turned a blind eye to his lovers.

“Trust and honesty are two of the qualities I find essential in marriage,” wrote Anne in an email to Fox News regarding her bold admission in “Kirk and Anne: Letters of Love, Laughter and a Lifetime in Hollywood.”

A LOOK BACK AT KIRK'S MOST ICONIC PERFORMANCES

“I never wanted to hear gossip about my husband from a third party,” explained Anne. “I told him right from the start that I needed to hear from him directly if he was having or had had a fling. And since he can’t keep a secret, he always has — none of them serious and usually when he was lonely and on location without me.”

The German-born publicist, who currently serves as president of Kirk's production company Bryna, also stated that her European upbringing led her to feel it was “unrealistic to expect total fidelity in a marriage.”

“European women are less likely to run to the divorce court in righteous indignation than Americans are,” she added. “I loved my husband and my life and our family, so why would I give all that up because of pride? We are together because we love and respect each other and share the same values.”

And it looks like the couple’s unconventional approach to love has worked just fine. Kirk married Anne in 1954 and they’ve been together ever since.

Kirk wrote to Fox News that he credited his spouse for saving his life, including the time when she refused to let him travel on a private plane named Lucky Liz in 1958 with director and friend Mike Todd, who was then married to Elizabeth Taylor. The plane crash, killing everyone on board.

“Anne has saved my life twice — once when she fought with me about flying on Mike Todd’s plane until I gave in, and the plane crashed over New Mexico,” he said. “Everyone was killed. She also drove me to the hospital after my stroke in record time and then gave me tough love to bring me out of my suicidal depression afterward. I think, once you read our letters to each other, you’ll understand my endless fascination with her.”

Kirk and Anne first met in Paris in the early 1950s while he was on location for an upcoming film and she was assisting with press. While the charismatic actor assumed he could easily win her over, his plans for seduction didn’t go over so smoothly.

“I had been a big movie star with two Oscar nominations by the time I met Anne, and I believed that any woman would be flattered if I asked her out,” he recalled. “Anne was the one who turned me down.”

Anne had her reasons.

“Of course, he was charming and sexy, but I had seen too many young women in Paris fall in love with American movie stars who went home to their lives and wives when their pictures wrapped,” she explained. “I certainly didn’t want to be another location romance casualty. I had survived war in occupied Paris, and knew instinctively how to protect myself from dangerous situations.”

But Kirk found a way to get close to Anne.

“I couldn’t convince her to go out with me, but I finally convinced her to do my publicity on the [1953] film, ‘Act of Love,’” he said. “I knew it would be strictly business, yet she still fascinated me and I wanted to know all about her. She had a wicked sense of humor, spoke four languages and was the most sophisticated and elegant woman I had ever met. So I fell in love with her.”

The move eventually worked. Anne said she admired his work ethic, noting that he learned to speak fluent French in less than two months just so that he could act in the French version of the film. And thanks to the movie’s long, grueling hours, the duo became friends.

“Kirk is unable to keep a secret, so I knew all about his extracurricular life as well,” she said.

Despite her admirer's womanizing reputation, Anne eventually learned that she was falling for him.

“One night we went to the Cirque d’ Hiver charity gala and the producers asked Kirk to participate,” she said. “He surprised everyone by coming out after the elephant act still in his elegant tuxedo pushing a giant broom of a pooper-scooper. Everyone laughed and I fell in love.”

Kirk revealed that it was their numerous love letters from over the years that inspired his twelfth book. Fortunately, Anne saved all of their correspondences that chronicled their relationship.

“I remember how much we depended on getting mail from each other when we were apart. So I asked her. And she brought a big battered file folder that she had kept hidden in a closet in our Montecito house,” he said. “My remarkable wife had kept everything — notes, cables, scrawled musings from plans and movie sets, starting in 1953 when we first met in Paris. At that moment, I knew this shouldn’t be my book, it should be ours.”

What has been the secret behind a high-profile Hollywood marriage that has thrived for over 60 years? While Anne does turn a blind eye to infidelity, the couple, who raised two sons, credit date night for sparking the romance every day.

“[Date night is] the same as it’s been throughout our marriage,” said Kirk. “We spend what we call the ‘golden hour’ together at around 6:30 each night. We’ll sit and talk and laugh and share our day and our thoughts with each other.”

“Except now we are very 21st century and bring along our iPads,” she added.