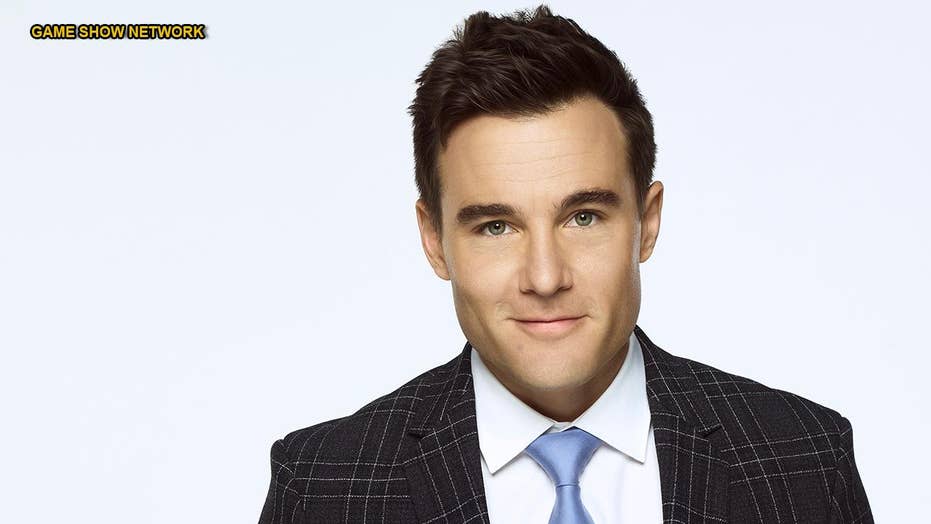 'Jeopardy!' host Alex Trebek is leading his life 'with dignity' amid cancer treatments, says Rob Belushi. The son of actor Jim Belushi and nephew of late comic John Belushi is the host of “Get a Clue” on the Game Show Network.

Rob Belushi is ready to come on down.

The son of actor Jim Belushi and nephew of late comic John Belushi is taking on his newest role — that of game show host for the new series “Get a Clue,” where contestants must compete to see who can successfully get the most answer words before time runs out.

While the 39-year-old was previously keeping busy taking on roles like that of Linus the bartender on “How I Met Your Mother,” as well as pursuing improv at the famed Steppenwolf Theatre, he’s been inspired by one special TV icon who’s been bravely sharing his personal battle with America.

Belushi spoke to Fox News about “Jeopardy!” host Alex Trebek’s health journey amid his cancer treatments, being compared to his famous relatives, what he thinks of Vanna White hosting “Wheel of Fortune,” as well as what really makes “Get a Clue” different.

Fox News: Alex Trebek has been very open about his cancer journey while hosting "Jeopardy." How do you think he's handling all of this while still entertaining America?
Rob Belushi: I mean, first of all, I think when you think of game shows, the first thing that always comes to mind is Alex Trebek. He is all four heads on the Mount Rushmore of game show hosting. So I think he's such a great model for how to approach your work and your life with dignity, respect, fun, but also attention to quality.

And he is really invested in that show. He does a lot of work on that show. And I think it's really important for people who are maybe more public in terms of personalities to share what's behind what they present on television. I think it's a doorway for other people to learn. Like you don't have to present this perfect. You can be a human being. Human beings go through some stuff and they fight through some things. Sometimes, they win. And sometimes, they lose.

But, our pressure on ourselves to be perfect or to be a certain thing or to achieve a certain expectation can be really detrimental. So whenever someone in the public sphere, I feel like shares who they are, what they're really going through with, I think A, it's tremendously courageous and B, it's tremendously helpful for their audiences to understand that these are people and we're all kind of connected through triumphs and tribulations in our own personal lives.

'JEOPARDY!'S' ALEX TREBEK SAYS HE WILL NEED 30 SECONDS FOR EXIT ON FINAL EPISODE: 'I WILL SAY MY GOODBYES'

ALEX TREBEK’S WIFE JEAN REVEALS HARDEST PART OF HIS CANCER BATTLE: ‘WHEN I SEE HIM IN PAIN, I CAN’T HELP’

Fox News: Vanna White recently described how nervous she was hosting "Wheel of Fortune" after Pat Sajack had emergency surgery. Did you get a chance to watch her host?
Belushi: I thought she was great. I mean, she's been watching that show forever and everyone gets nervous the first time they do anything, but she's a natural and a professional.

I think she absolutely did a fantastic job and good for her. I feel like, well, I'm not going to take a position that could be a highly charged, but let's work Vanna in 10 years ago from now, get her behind that host desk, hold those cards.

Fox News: Are you ever worried about being compared to your dad Jim Belushi or late uncle John Belushi?
Belushi: I’m not, really. I mean, I am the same height as my uncle, so that's pretty cool. But you know, I think those men were very successful in their own way. They have very specific energies and I think my energy is pretty different.

ALEX TREBEK REVEALS DEPRESSION BOUTS AMID CANCER: 'I'M NOT ALWAYS THE MOST PLEASANT PERSON TO BE AROUND'

And while I respect what they do, I'm usually more focused on just trying to be myself in any situation I'm in and share who that person is and if it translates to success, that's great. And if it doesn't, I have two beautiful wiener dogs that love me no matter what, how much work I do, no matter what I book, no matter how much bacon I bring home, as long as there are at least scraps of bacon in my hand.

Fox News: What made you host “Get a Clue”?
Belushi: I’ve always loved game shows. It's so fun to watch people at different emotional precipices and often when we get to watch people when we all feel good, you know, but what attracted me so much to this show was really the people at game show network. They're really supportive and great and fun to work with and they treat everyone well. So that was my initial interest and then it's a new game.

So we all kind of learned it together, perfected it together. So we finished it out as a team and everyone collaborated really well. So it was a really comfortable work environment and that is always attractive. But as we began taping and filming the show, some of the things that I enjoyed the most were really just working with new people every day.

Seeing what they did on the spot while their mind was in panic, trying to give clues to their teammates, some of whom they knew very well and some of them who they like, they work together and either the good communication or kind of dysfunction of communication was just a pleasure to be in the middle of.

And I just kind of get to remark on it and make people feel comfortable when they're feeling awkward or overwhelmed or if people are a little too confident, I get to, you know, bring their awareness to fit the room. Now the room was pretty large so I didn't have to do that often.

Fox News: Growing up, what was your favorite game show and why?
Belushi: My favorite game show growing up as a kid was probably "Double Dare." Marc Summers on Nickelodeon because, you know, they were kids running through huge peanut butter and jelly sandwiches. I think any person near my age probably had a dream to be on "Double Dare" with their family.

HIGHEST-EARNING 'JEOPARDY!' CHAMPS TO PLAY FOR A SHARE OF $1.5 MILLION

But, you know, as I grew older, I loved "The Price is Right." I love "Let's Make a Deal" right now. "Who Wants to Be a Millionaire" was a big deal in college. When I was in college ... $1 million felt so life-changing. I mean it still is, but these game shows have gone really bonkers with what they're giving away. We're giving away a good time and some money.

Fox News: What do you think is missing from today's game shows?
Belushi: You know, there's such a wide range of game shows out there to pick from. I know what we're really excited about with "Get a Clue" is watching people work together for a common goal. It's rested squarely on their ability to communicate with their team members. So, I think what makes get a clue a little bit different is you're forced to work in a group, or you elect to work in a group and you have to listen to one another to achieve your goal. And when you do achieve the goal, everyone shares in it.

I also think "Get a Clue" has a lot of energy and a lot of fun and it's kind of light. The stakes aren't crazy high, but that also means, like when you win, it feels really good. And when you lose, it doesn't feel like you just missed the opportunity of a lifetime. You just had a great time with a bunch of fun people and hopefully surprised yourself and others. So, we hope you feel the same way because it felt that way on stage with all the amazing contestants.

‘JEOPARDY!’ TEEN WINNER HONORS ALEX TREBEK, DONATES $10G TO CANCER RESEARCH: ‘I WAS INSPIRED TO GIVE’

(L-R) Pat Sajak, Vanna White and Alex Trebek attend Harry Friedman being honored with a Star on the Hollywood Walk of Fame on November 01, 2019, in Hollywood, California. (Photo by David Livingston/Getty Images)

“Get a Clue” airs weekdays at 4 p.m. on the Game Show Network.