Challenging night for Warren: Dems attack her on debate stage, then ‘Squad’ backs Sanders
Tuesday was arguably a bad night for rising Democratic presidential co-frontrunner Sen. Elizabeth Warren. She came under attack from all sides during Tuesday night's presidential debate and then reports surfaced that members of “The Squad” were set to endorse Sen. Bernie Sanders, I-Vt., for president. Several of the candidates during the debate in Westerville, Ohio, criticized Warren for refusing to answer whether her "Medicare for All" plan would raise taxes for the middle class. Warren once again dodged the issue, insisting only that "costs will go down" for the middle class. Click here for more on this story.

But perhaps the most disheartening news for Warren came after the debate. Reports said that at least three members of the “Squad” of far-left freshman members of Congress will endorse Sanders for president. Fox News has learned that Rep. Alexandria Ocasio-Cortez, D-N.Y., will appear with Sanders on Saturday in Queens, N.Y., at a “Bernie’s Back” rally designed to generate excitement for the senator’s campaign following his recent heart attack. Rep. Ihan Omar, D-Minn., issued a statement confirming her endorsement, and CNN reported that Rep. Rashida Tlaib, D-Mich., will endorse Sanders as well. It was not immediately clear if Squad member Rep. Ayanna Pressley, D-Mass., will endorse a candidate soon.

Biden insists he and son Hunter did nothing wrong, focus should be on Trump corruption
During Tuesday’s debate Vice President Joe Biden defiantly defended his son's business practices overseas and vehemently denied any wrongdoing. Biden had been at the top of the crowded field for months but has come under withering assault from the White House concerning his son Hunter's lucrative overseas business dealings. 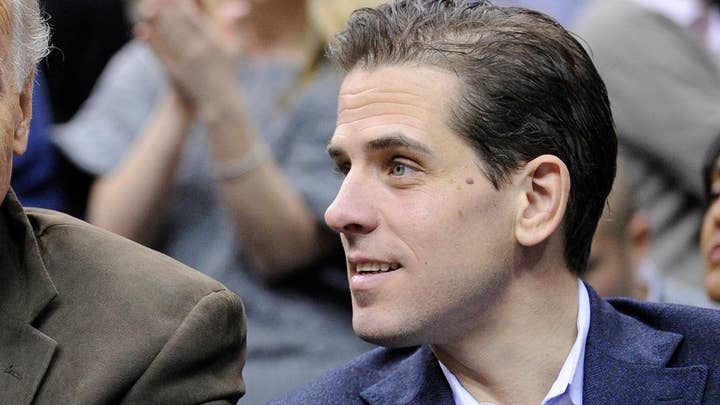 CNN anchor Anderson Cooper pressed Joe Biden on Hunter's admission in a televised interview earlier in the day that he made a mistake by obtaining a lucrative role on the board of a Ukraine company, with no relevant expertise, while his father was vice president and handled Ukraine policy. Ultimately, the elder Biden insisted neither he nor Hunter did anything wrong and that the focus should be on President Trump.  "The fact of the matter is, this is about Trump's corruption. That's what we should be focused on," he said. Click here for more on this story.

Other highlights in the debate: All of the 12 Democrats onstage backed the ongoing impeachment inquiry against President Trump. In a sign of apparent disunity and hesitation among Democrats, though, House Speaker Nancy Pelosi said only minutes before the debate began that there would be no vote on formally commencing the inquiry. 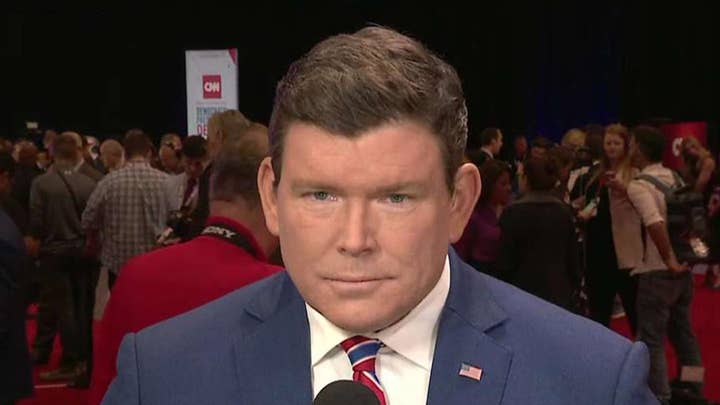 Sanders stood by his claim that he would provide jobs for every single American -- "tens of millions of Americans" - purportedly ending unemployment in the United States. Biden, Warren, and Sanders -- who is recovering from a heart attack two weeks ago --  all faced pointed questions about their age, and health and how those factors could affect their electability and potential presidency.

The simmering bad blood between rivals South Bend, Ind. Mayor Pete Buttigieg and former Rep. Beto O’Rourke of Texas appeared to boil over as they continued to jab at each other.  At one point, Buttigieg, who has said that O’Rourke’s gun buyback proposal could hurt Democrats appeal with moderate voters, firmly told O'Rourke: “I don’t need lessons from you on courage.”

CNN and The New York Times were widely criticized for not asking any of the 12 Democratic candidates about China during Tuesday night's presidential debate. China has made making major headlines in recent weeks between its trade war with the United States as well as the growing tensions between the communist nation and the NBA after the Houston Rockets general manager Daryl Morey made a tweet in support of the Hong Kong protesters.

Doug Schoen: The fourth Democratic debate's big winner, biggest loser and two surprise showings
According to Doug Schoen, a Fox News contributor and veteran Democratic pollster and consultant, Elizabeth Warren was still the big winner in the most crowded presidential debate ever held. In his analysis for Fox News Digital, Schoen said Warren showed she was sharp and prepared as she fended off attacks from candidates who were looking to cut into her polling lead -- and that only solidified her frontrunner status.

The biggest loser, according to Schoen, was Joe Biden, who needed to deliver a strong performance to reassure voters that he is ready for a general election fight against Trump. However, Schoen wrote, Biden was unable to break through and deliver the forceful showing that he needed, dodging a question regarding his son’s work with Ukraine and delivering several other uneven answers throughout the night.

Nationals sweep Cardinals, enter the World Series for the first time in franchise history
For the first time since 1933, the nation’s capital will be represented in the World Series. The Washington Nationals, who moved to D.C. from Montreal in 2005, won the National League pennant Tuesday night, getting RBIs from middle-of-the-order stars Anthony Rendon and Juan Soto in a seven-run first inning. Patrick Corbin's 12-strikeout performance, plus a trio of relievers helped hold on to beat the St. Louis Cardinals 7-4 in Game 4 to complete a sweep in the league’s Championship Series. 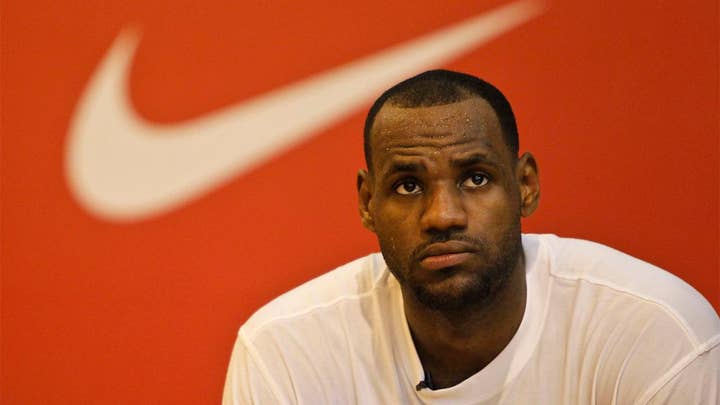 LeBron James' China money ties scrutinized after Hong Kong remarks
When Los Angeles Lakers star LeBron James warned Monday of financial ramifications related to Houston Rockets general manager Daryl Morey’s tweet supporting pro-democracy Hong Kong protesters, he may have been referring to his own business interests in China. James has a clear financial incentive to maintain a positive image in the region. Click here for more on this story.

COMING UP TONIGHT ON FOX NEWS: Megyn Kelly sits down with Tucker Carlson on "Tucker Carlson Tonight" at 8 p.m ET for her first TV interview since leaving NBC. 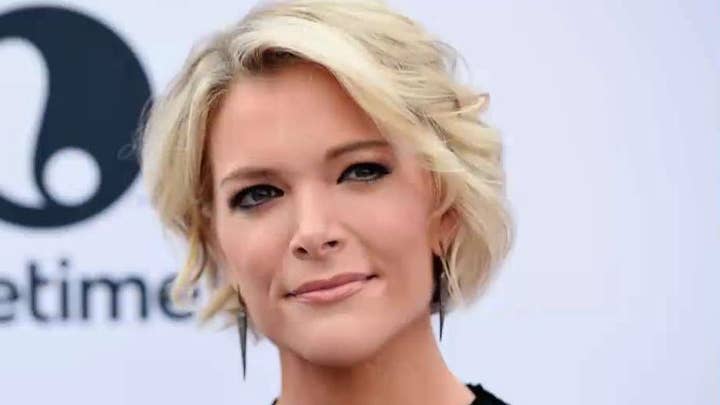 THE LATEST FROM FOX BUSINESS
Buffett's Berkshire Hathaway asks Fed to be allowed to buy more Bank of America shares.
Fire at California oil facility prompts health worries.
WeWork could run out of cash by November without emergency financing. 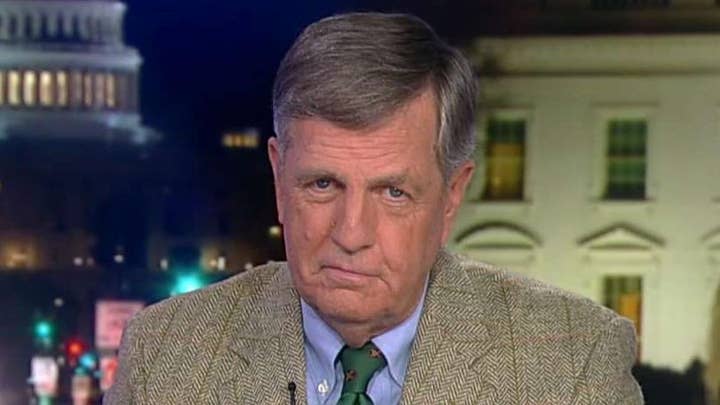