Joe Biden's son Hunter says he may have made a mistake in the grand scheme of things, but it was not due to an ethical lapse. Judge Andrew Napolitano reacts.

Hunter Biden broke his silence Tuesday in his first televised interview since his overseas business dealings came under scrutiny, maintaining he did nothing improper while he served on the board of a Ukrainian gas company.

“I know I did nothing wrong at all. Was it poor judgment to be in the middle of something that is a swamp in many ways? Yeah," he said in an exclusive sit-down with ABC's Amy Robach at his Los Angeles home.

A photo obtained by Fox News last month showed Joe Biden and Hunter golfing in the Hamptons with Devon Archer, who served on the board of the Ukrainian natural gas company Burisma Holdings with Hunter. Joe Biden had told Fox News that he never discussed his son’s foreign business dealings with him.

Robach asked Biden if he would have gotten the board seat if he had a different last name.

"I don't know, probably not," he responded, explaining he left the board in April when the five-year term ended.

He said he made the decision so that his father would not have the "distraction" to deal with during his campaign. President Trump and his lawyer, Rudy Giuliani, have urged Ukraine to investigate Joe Biden for pressuring the country to fire a top prosecutor, Viktor Shokin.

At the time, Shokin was investigating Burisma Holdings — where Hunter had a lucrative role on the board despite limited relevant expertise. Critics have alleged Hunter Biden, in effect, might have been selling access to his father, who had pushed Ukraine to increase its natural gas production.

The interview comes ahead of Joe Biden's appearance at a Democratic debate Tuesday night in Ohio, while more of Hunter's financial past is also being subject to scrutiny. 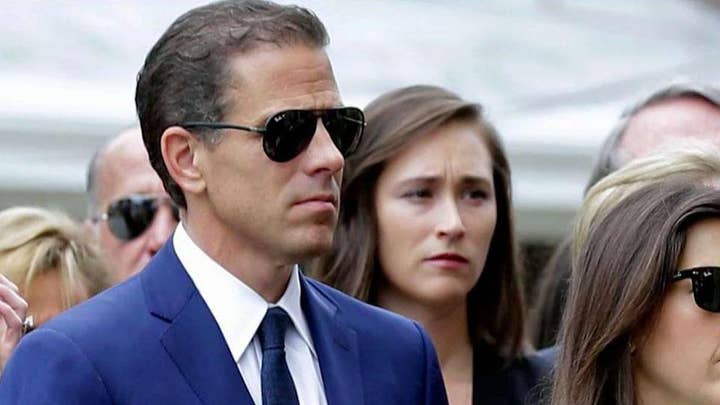 Although Trump repeatedly has hammered Hunter Biden's ties to China and Ukraine, the latest cloud of suspicion came as Republicans pointed to resurfaced 2008 reports in The New York Times and The American Spectator. The articles, written as Barack Obama and John McCain vied for the White House, found that Hunter Biden received consulting fees from the financial services company MBNA from 2001 to 2005 -- while his father, then a senator, was pushing successfully for legislation that would make it harder for consumers to file for bankruptcy protection.

The precise amount of the payments was unclear, but a company official once said Hunter Biden was receiving at least a $100,000 per year retainer, The Times reported. Hunter Biden previously had been an executive at MBNA beginning in 1996, but the consulting fees came years after his departure from the company as a full-time employee.

Aides to then-presidential candidate Barack Obama at the time denied that any lobbying had occurred, and insisted the payments were proper.

On Sunday, Hunter Biden announced he will be stepping down from the board of a Chinese equity fund and that he would not work for any foreign-owned companies if his father becomes president.