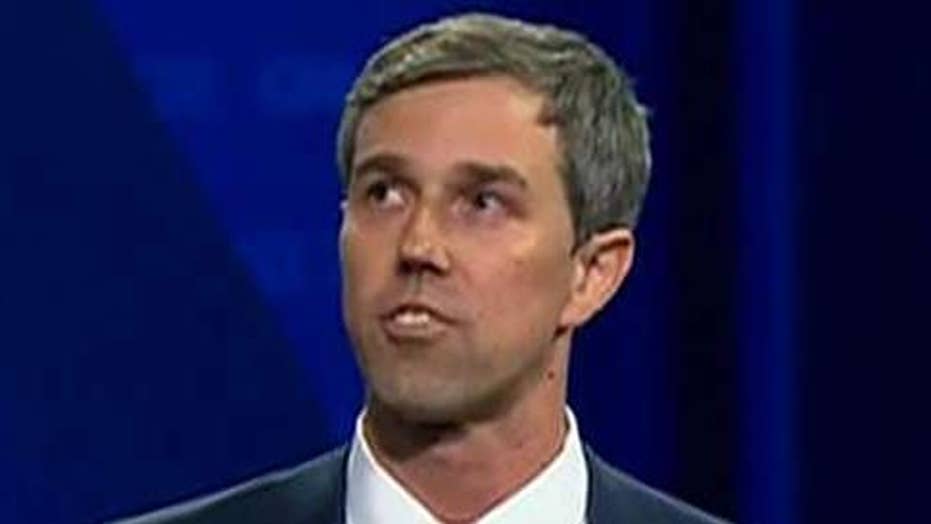 At one point, Buttigieg, who has said that O’Rourke’s gun buyback proposal could hurt Democrats appeal with moderate voters, firmly told O'Rourke: “I don’t need lessons from you on courage.”

The two candidates have jabbed at each other in recent weeks over their differences on combating gun violence – and specifically on the merits of the mandatory assault weapons buyback program championed by O’Rourke.

BUTTIGIEG, KLOBUCHAR, SLAM WARREN OVER NOT ANSWERING ON HOW SHE'LL PAY FOR MEDICARE FOR ALL

Asked by the moderators at the debate at Otterbein University in Ohio how he would enforce his plan, O’Rourke answered that he expected “my fellow Americans to follow the law.”

And Buttigieg emphasized that “we cannot wait for purity tests…we have to just get something done.”

“This is not a purity test,” O’Rourke fired back, emphasizing that if the federal government banned the sale of assault weapons, it made sense that existing weapons need to be removed from the streets.

And he charged that Buttigieg’s “shiny object” criticism was a “slap in the face…to those who have survived gun violence, those who’ve lost a loved one to an AR-15, an AK-47.”

WARREN COMES UNDER ATTACK FROM ALL SIDES AT DEMOCRATIC DEBATE

O’Rourke also indirectly suggested that was Buttigieg was being cautious on backing a mandatory buyback program due to poll testing and focus groups.

“That seemed like a fairly personal exchange,” remarked Mo Elleithee, the founding executive director of Georgetown University's Institute of Politics and Public Service and a Fox News contributor.

Elleithee, a senior spokesman for Hillary Clinton’s 2008 presidential campaign who later served as communications director for the Democratic National Committee, emphasized that Buttigieg challenged anyone who questioned his boldness. "That’s what Beto tried to do, saying ‘I’ve got the bolder idea.’ And when Buttigieg came back and said ‘don’t talk to me about boldness, don’t talk to me about courage,’ it was a very powerful moment.”

O’Rourke has made curbing gun violence central to his campaign his hometown of El Paso, Texas was rocked by a horrific mass shooting in early August.

With the spate of mass shootings in recent years, curbing gun violence has been a top issue in the Democratic presidential nomination race.