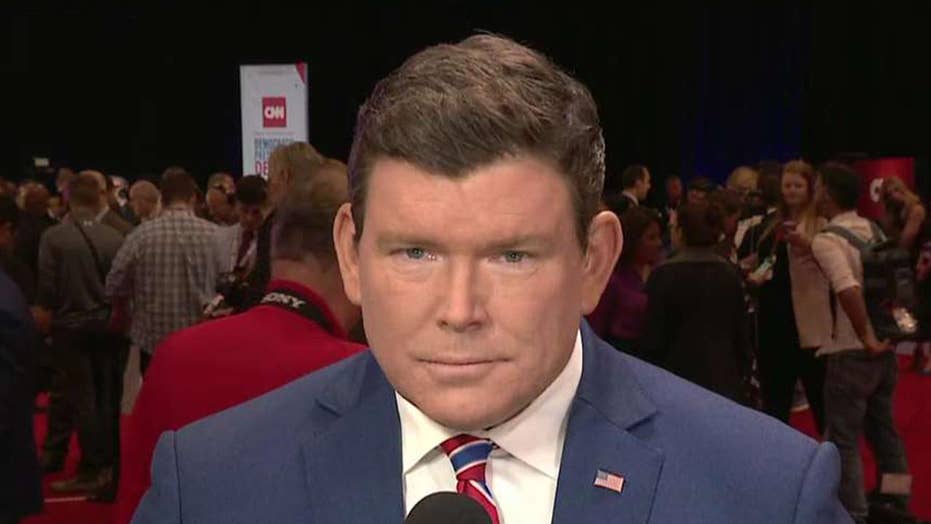 Former Vice President Joe Biden and the other eight candidates on stage came out the losers in the three-hour Democratic presidential primary debate.

Warren’s strong performance will likely solidify her frontrunner status ahead of Biden and Sanders. She emerged the clear winner of the night by showing she was sharp and prepared as she fended off attacks from candidates who were looking to cut into her polling lead.

WARREN COMES UNDER ATTACK FROM ALL SIDES AT DEM DEBATE, AS BIDEN DEFENDS SON'S BUSINESS PRACTICES

Even during the heated exchanges over health care and a wealth tax, Warren was able to turn attacks leveled against her around, and still deliver the best answers of the evening.

Warren questioned why the other candidates “think it is more important to protect billionaires than to invest in Americans” when responding to an attack on her plan for a wealth tax.

And importantly, Warren remained the focal point of the debate, speaking for the most amount of time of all of the candidates.

The senator from Massachusetts now has unmatched fundraising and polling momentum, along with a series of strong debate performances. This, coupled with the fact that Biden and Sanders have been weakened in dissimilar but debilitating ways recently, almost guarantees that Warren will take over as the front-runner.

Sanders has faced a precipitous decline in the most recent polls given the significant questions about his health and stamina following his recent heart attack.

However, Sanders delivered a strong, forceful performance in the debate, succeeding in showing voters that he has not lost a step, making him the second-place finisher of the night.

But it is clear that Warren has supplanted Sanders as the leader of the progressive movement in the Democratic field. As a result, it will be difficult – if not impossible – for Sanders to reestablish himself ahead of Warren.

It is clear that Warren has supplanted Sanders as the leader of the progressive movement in the Democratic field. As a result, it will be difficult – if not impossible – for Sanders to reestablish himself ahead of Warren.

Buttigieg has been called the breakout star of the Democratic field – though he has recently struggled to distinguish himself. He had several strong moments in the Tuesday night debate. He was able to make a compelling case as a young, center-left candidate from a swing state with a military background.

Buttigieg was particularly strong during a tense exchange with Rep. Tulsi Gabbard of Hawaii over President Trump’s decision to withdraw troops from northern Syria, delivering a response that elicited cheers from the audience.

All eyes, particularly those of Democratic leaders, strategists, and donors were on Biden, who needed deliver a strong performance to reassure voters that he is ready for a general election fight against Trump.

However, Biden was unable to break through and deliver the forceful showing that he needed, dodging a question regarding his son’s work with Ukraine and delivering several other uneven answers throughout the night.

With each passing day, Biden seems to move further from securing the Democratic presidential nomination, and his unimpressive performance Tuesday night will likely result in a post-debate polling decline.

Additionally, although Sen. Amy Klobuchar of Minnesota had a number of well-executed lines taking aim at Warren, many felt similar to the inconsequential attacks leveled against Warren by former Rep. John Delaney of Maryland during the first debate. Thus, Klobuchar’s performance is unlikely to result in the post-debate polling spike her campaign needed.

Sen. Kamala Harris of California similarly fell short, as she failed to distinguish herself in any meaningful way at a time when her campaign desperately needs a boost. Given that recent polls have her hoovering at around 5 percent, she will likely not be able to regain the momentum she had just over two months ago.

The remaining candidates – all barely registering in polls – were the biggest losers of the night. Rep. Gabbard, former Housing and Urban Development Secretary Julian Castro, philanthropist Tom Steyer, Sen. Cory Booker of New Jersey, former Rep. Beto O’Rourke of Texas and entrepreneur Andrew Yang failed to have the breakout moment they all desperately needed to show voters they could defeat Trump in November 2020.