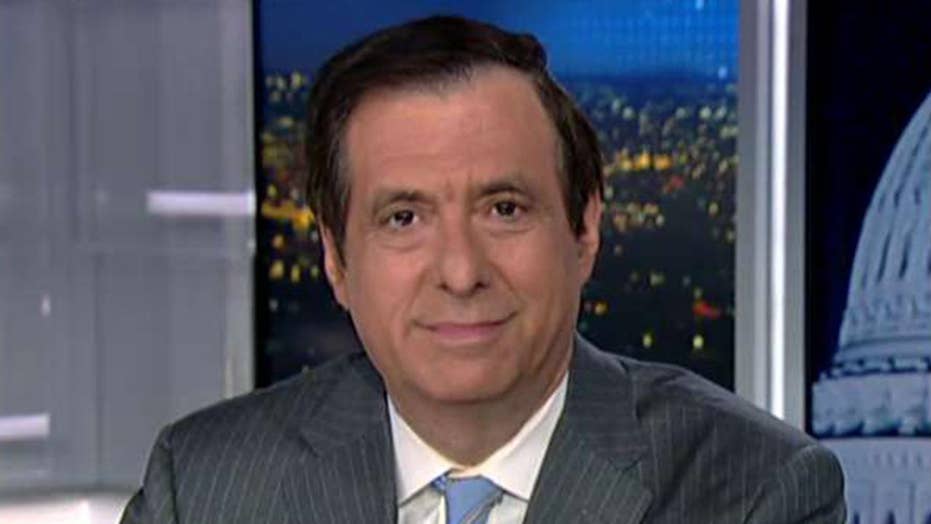 All of the 12 Democrats onstage in Westerville, Ohio, meanwhile, backed the ongoing impeachment inquiry against President Trump. In a sign of apparent disunity and hesitation among Democrats, though, House Speaker Nancy Pelosi said only minutes before the debate began that there would be no vote on formally commencing the inquiry.

The debate marked the first time the candidates met since Pelosi's news conference last month at which she unilaterally declared the inquiry had begun -- a move that the White House has said is legally insufficient. The candidate lineup set a record for most politicians on a single debate stage, topping the 11 Republican candidates who assembled in 2016.

"Sometimes there are issues that are bigger than politics, and I think that's the case with this impeachment inquiry," Warren, D-Mass., asserted at the outset of the debate, when asked why Congress should bother with the process given the impending election.

Biden has been at the top of the crowded field for months, but has come under withering assault from the White House concerning his son Hunter's lucrative overseas business dealings.

The elder Biden faced something of a timid confrontation over the issue during the debate, when CNN anchor and debate moderator Anderson Cooper broached the topic by stating, without evidence, that President Trump's accusations of misconduct by the Bidens were "false."

But Cooper pressed Joe Biden on Hunter's admission in a televised interview earlier in the day that he made a mistake by obtaining a lucrative role on the board of a Ukraine company, with no relevant expertise, while his father was vice president and handled Ukraine policy. (“I know I did nothing wrong at all. Was it poor judgment to be in the middle of something that is a swamp in many ways? Yeah,” the younger Biden said Tuesday morning.)

Joe Biden recently pledged that no members of his family would engage in foreign deals if he were to be elected president -- a tacit admission, Republicans said, of previous poor judgment or even wrongdoing.

Biden insisted he never discussed Ukraine matters with Hunter, although Hunter separately told The New Yorker magazine that the dealings had come up in one instance.

He concluded: "The fact of the matter is, this is about Trump's corruption. That's what we should be focused on."

Devon Archer, far left, with former Vice President Joe Biden and his son Hunter, far right, in 2014. Archer served on the board of the Ukrainian company Burisma Holdings with Hunter, and began serving before this picture was taken. Joe Biden has denied ever speaking to his son about his overseas business dealings.

Later on, as the debate heated up, Biden remarked: “These debates are kinda crazy." In a head-turning moment, he also stumbled over his words, saying wealthy individuals might be found "clipping coupons in the stock market."

Separately, asked about Trump's policy in Syria, Biden appeared to give an extended answer in which he meant to talk about Turkish President Recep Erdoğan -- but kept referencing Syrian President Bashar al-Assad instead.

HUNTER BIDEN BREAKS SILENCE ON HOW HE OBTAINED LUCRATIVE GIGS WITH NO RELEVANT EXPERTISE, BUT A VERY POWERFUL FATHER

Asked about his health toward the end of the debate, Biden vowed to release his medical records before the Iowa caucuses are held, and said his age (76) gives him "wisdom."

Hunter Biden obtained other high-paying board positions domestically and internationally, with no relevant expertise, while his father was a senator and vice president. For example, Hunter became an executive at the financial services company MBNA just two years after leaving law school. MBNA sources told Fox News this week that the company was trying to curry favor with Joe Biden, who was shepherding a bill favored by MBNA to passage in the Senate.

Meanwhile, Warren has climbed to co-front runner status but faces new questions about her dubious claims to Native American ancestry.

"I appreciate Elizabeth's work, but again, the difference between a plan and a pipe dream is something you can actually get done," Sen. Amy Klobuchar, D-Minn., said to Warren. "At least Bernie’s being honest here. ... I’m sorry, Elizabeth.”

“These debates are kinda crazy."

South Bend, Ind., Mayor Pete Buttigieg also lambasted Warren on health care: “Your signature is to have a plan for everything, except this," he said.

Buttigieg specifically knocked Warren for the nonanswer, saying her failure to offer a direct answer is "why people are so frustrated with politicians" and arguing that "Medicare-for-All" would "unnecessarily divide this country."

"We heard it tonight," Buttigieg said. "A yes-or-no question that didn't get a yes-or-no answer."  He said he wanted a plan that could be summed up as "Medicare-for-All" if you choose it, not whether you want it or not.

Former U.S. Rep. Beto O'Rourke also pressed Warren on the tax issue, to no avail. (Later on, O'Rourke had no answer when Cooper asked how he could confiscate Americans' firearms, given that the government has no way of knowing where the vast majority of AR-15s are located. He said only that he believes Americans "will do the right thing" voluntarily.)

Sen. Bernie Sanders, who wrote the "Medicare-for-All" legislation that Warren has embraced, said it was "appropriate to acknowledge taxes will go up."

Sanders, who Fox News has confirmed will soon be endorsed by New York Democratic Rep. Alexandria Ocasio-Cortez, also spoke about his recent heart attack: “But let me take this moment, if I might, to thank so many people from all over this country, including many of my colleagues up here, for their love, for their prayers, for their well wishes. ... And I just want to thank you from the bottom of my heart, and I'm so happy to be back here with you this evening.”

Also during the debate, Democrats also piled onto Warren for her signature proposal, a 2 percent wealth tax to raise the trillions needed for many of her ambitious proposals. Technology entrepreneur Andrew Yang noted that such a measure has failed in almost every European country where it's been tried.

The event, hosted by CNN and The New York Times, was on the campus of Otterbein University, just outside Columbus in Ohio, a state that has long helped decide presidential elections but has drifted away from Democrats in recent years.

Many of the candidates were struggling just to get noticed — trying to make up ground in a race that kicks off officially in just over three months with the Iowa caucuses on Feb. 3. Buttigieg and Sen. Kamala Harris, D-Calif., are trying to crack the top tier.

In one possible indicator the debate was a lengthy one, Harris briefly mentioned her proposal to have Twitter take Trump's account down, and demanded that Warren explain why she felt that approach was unwise. Warren, who last week laughed openly when informed by a reporter of Harris' idea, responded that she wants Trump out of the White House, not just banned from Twitter.

Progressives and right-wing commentators alike were aghast at Harris' decision to again bring up the unrealistic and unpopular idea of somehow suspending Trump from Twitter.

"I cannot believe @KamalaHarris  is pushing this suspend Donald Trump's twitter account bullshit at a presidential debate," former Obama administration official and Pod Save America cohost Tommy Vietor wrote on Twitter. "It's so small ball. She is bigger and better than this."

Fellow Obama administration alumnus and podcast host Ben Rhodes added: "Seems like there are bigger issues in the world."

Gabbard hit The New York Times and CNN for waging what she called a propaganda campaign against her, while also promoting endless "regime-change wars."

"The New York Times and CNN have smeared veterans like myself for calling for an end to this regime change war," Gabbard said. "Just two days ago, The New York Times put out an article saying I'm a Russian asset and an Assad apologist, and all these different smears. This morning, a CNN commentator said on national television that I'm an asset of Russia. Completely despicable."

Gabbard has criticized Trump for how he's conducted the withdrawal in Syria, but said Tuesday that while Trump has "the blood of the Kurds on his hands. ... So do many of the politicians in both parties who supported this regime change war."

Gabbard, who was one of the last Democratic House members to back an impeachment inquiry, additionally lamented that some Democrats had been calling for Trump's impeachment since right after the 2016 election, undermining the party's case against him.

The debate's foreign policy discussion concluded without any mention by the moderators of the ongoing push by China to censor American companies, including the NBA and Blizzard Entertainment, from making or tolerating pro-Hong Kong statements. Buttigieg briefly mentioned that the Hong Kong protests were not receiving support from the White House.

Yang's plan for a universal basic income spurred a discussion onstage concerning whether a federal jobs guarantee is a better plan -- something of a remarkable achievement for Yang, who has struggled in the polls while advancing his own unique agenda.

Buttigieg then said he did not support court packing, but wanted "reforms" to make the court less significant -- including possibly a "fifteen member court, where five of the members can only be appointed by unanimous agreement of the other ten." A similar idea was being debated in the Yale Law Journal, Buttigieg said, in a shout-out to the left-wing student publication.

Gabbard said that Democrats were right decades ago when they said abortion should be "safe, legal, and rare" -- highlighting a shift to the left among Democrats.

The 2020 field, which once had swelled to two dozen, has been shrinking as the Democratic Party's rules have mandated that candidates meet higher donor and fundraising thresholds to debate.

Author Marianne Williamson, who was not physically present at the debate on Tuesday because she failed to meet polling thresholds, remarked on Twitter as it unfolded: "No, they're not the only Democratic candidates for President of the United States."