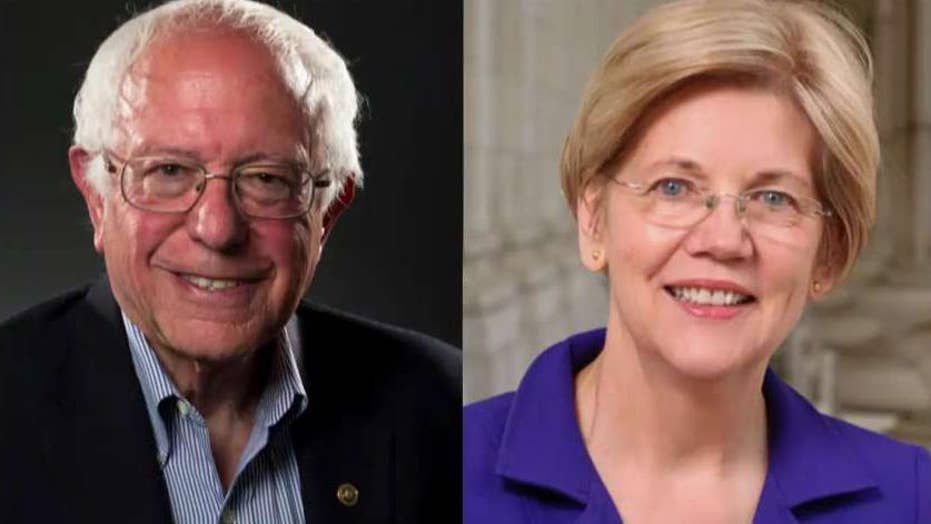 Bernie Sanders accuses Elizabeth Warren of being a 'capitalist'

Democratic presidential candidate Bernie Sanders tried to set himself apart from 2020 rival and fellow progressive Elizabeth Warren as she gains momentum in the polls; reaction on 'The Five.'

Sen. Bernie Sanders, I-Vt., stood by his claim that he would provide jobs for every single American, purportedly ending unemployment in the United States.

His comments came during the fourth Democratic debate on Tuesday when CNN anchor Erin Burnett asked him about his jobs guarantee.

"You say your federal jobs guarantee is part of the answer to the threat of automation, that tens of millions of Americans could end up losing their jobs. Are you promising that you will have a job for every single one of those Americans?" she asked.

"Damn right we will," Sanders quickly responded. Sanders initially made a jobs guarantee when he released his version of the "Green New Deal" in August.

According to Sanders' plan, his sweeping overhaul to combat climate would require 20 million new jobs.

"We will also create millions of jobs in sustainable agriculture, engineering, a reimagined and expanded Civilian Conservation Corp, and preserving our public lands."

He has acknowledged that the effect of his plan would be widespread job losses in the energy industry and promised to provide a slew of public assistance measures to those individuals.

"This plan will prioritize the fossil fuel workers who have powered our economy for more than a century and who have too often been neglected by corporations and politicians," he said.

"We will guarantee five years of a worker’s current salary, housing assistance, job training, health care, pension support, and priority job placement for any displaced worker, as well as early retirement support for those who choose it or can no longer work."