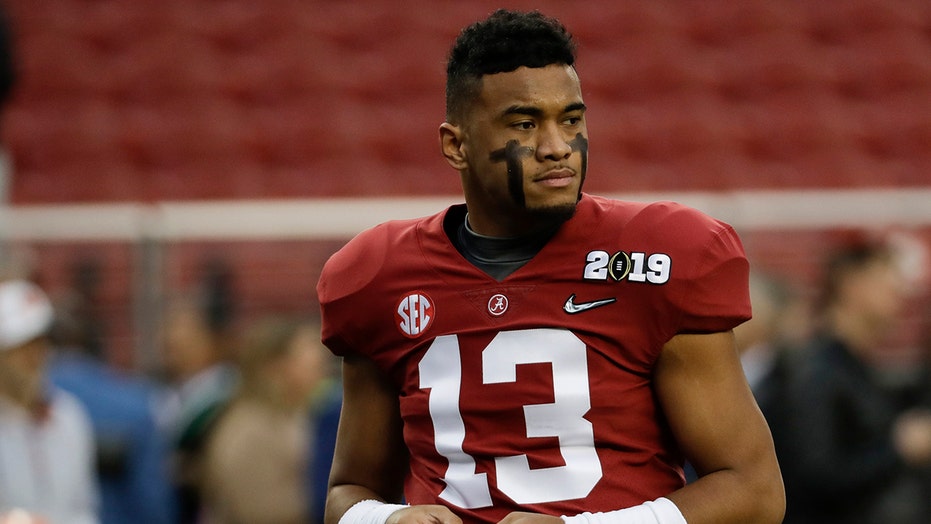 How pro sports can safely return this summer

The NFL Draft is a day away and teams across the league are attempting to navigate the rocky waters of trying to scout college prospects during the coronavirus pandemic.

The Cincinnati Bengals have been on the clock since the end of the 2019 season, finishing the year with a 2-14 record. The Bengals have a chance to pick a franchise-altering player with the No. 1 pick, something they did in 2003 when they selected Carson Palmer No. 1 overall.

FoxNews.com writers Ryan Gaydos, Paulina Dedaj, Dan Canova and Chris Ciaccia contributed to a one-round mock draft for the 2020 event. It's the third version of the mock draft. You can see version 1 here and version 2 here.

Read below for the selections.

The Cincinnati Bengals will take LSU quarterback Joe Burrow with the No. 1 overall pick. Burrow, an Ohio native, put together a stellar national championship season with the Tigers in 2019; he threw for 5,671 yards and 60 touchdowns. He will be expected to step in immediately as Cincinnati's QB1.

Running back Joe Mixon and wide receivers A.J. Green, Tyler Boyd and John Ross should all help Burrow with his transition to the pros.

Talk about a homecoming. The Washington Redskins select defensive end Chase Young, a D.C.-area native, with the No. 2 overall pick. This five-star prospect out of Ohio State is sure to be a starter for head coach Ron Rivera as he looks to build his roster. At 6-foot-5, 264 pounds, Young registered 46 tackles and 16 1/2 sacks during his junior season.

Detroit Lions head coach Matt Patricia and general manager Bob Quinn come from the Bill Belichick school of thinking, placing importance on versatility. No player in the 2020 draft is more versatile than Clemson linebacker Isaiah Simmons. In college, he lined up at linebacker, safety, slot corner and rushed the passer. He's a can't-miss prospect.

With Isaiah Simmons off the board, the Giants could look to address its defensive line issues with one of the better defensive tackles in the draft: Derrick Brown. The Auburn stud was named the 2019 SEC Defensive Player of the Year. He also won the Ronnie Lott Troy for being the IMPACT player of the year. Over his four years with the Tigers, he had 12 1/2 sacks and 170 total tackles. He also recorded five forced fumbles and four fumble recoveries.

The Miami Dolphins will... wait to take a franchise quarterback with the No. 5 pick. Instead, the Dolphins will choose Iowa offensive tackle Tristan Wirfs. During his junior season, he dominated over 13 games, 10 at right tackle, three at left tackle, which earned him a 2019 second-team All-American nod as well as Big Ten Offensive Lineman of the Year honors. Miami will revisit their quarterback situation later in the draft.

After coming up short in the Tom Brady sweepstakes and deciding to move on from Philip Rivers, the Los Angeles Chargers are definitely in the market for a quarterback. The Chargers select Oregon’s Justin Herbert with the No. 6 overall pick. At 6-foot-6, 236 pounds, Herbert threw 3,471 yards for 32 touchdowns. He’ll get a decent amount of playing time in his rookie season behind veteran Tyrod Taylor.

The Panthers are in rebuild mode under head coach Matt Rhule. They need to solidify their offensive line and Alabama offensive tackle Jedrick Wills can do that right out of the gate. With prototypical size and strength, he could be the edge the team needs to rebuild.

The Cardinals aren’t going to miss a chance on taking a potential franchise-changing offensive lineman, which is why Mekhi Becton gets to go to the desert. Becton had a drug test “flagged” at the combine but that shouldn’t deter Arizona from adding some protection for their second-year quarterback Kyler Murray.

The best defensive back in the draft is Ohio State’s Jeff Okudah and he is going to go to Jaguars at No. 9. Okudah will replace Jalen Ramsey, who was traded to the Los Angeles Rams last season. Okudah made his mark on the college game during his sophomore and junior seasons. As a sophomore, he recorded 32 total tackles and eight passes defended. In his junior season, he recorded 28 tackles and three interceptions.

The Cleveland Browns need to address their tackle problem with the No. 10 overall pick and they’re doing just that by selecting Georgia’s Andrew Thomas. Arguably the best offensive lineman in the draft, Thomas’ size and speed will definitely land him the starting job offering some much-needed support for Baker Mayfield.

The New York Jets select Oklahoma wide receiver CeeDee Lamb. Sam Darnold gets a new weapon to give the ball to, one with 4.5 speed. He's been compared to Antonio Brown, without the attitude.

Jon Gruden isn’t one to shy away from making an interesting pick. In this case, the Raiders go with Henry Ruggs over Jerry Jeudy. Ruggs had 40 receptions for 746 yards, a 15.1 yard per catch average, and seven touchdowns at Alabama. He will get to be Derek Carr’s No. 1 receiver when he steps onto the field.

At No. 13, the San Francisco 49ers select South Carolina defensive lineman Javon Kinlaw. The Niners traded All-Pro interior lineman DeForest Buckner to the Colts, and they acquired this pick, which they will use for his replacement. After registering 35 tackles, six sacks in 12 starts last season, Kinlaw earned first-team Associated Press All-American and first-team All-SEC honors.

With so many offensive linemen getting swept early on, the Tampa Bay Buccaneers are taking a chance drafting Houston’s Josh Jones. Jones performed well his senior year but put up average numbers at the combine. While not a household name just yet, Jones has had solid comparisons to two top offensive linemen – Eric Winston and Lane Johnson.

Denver stops the slide of Alabama wide receiver Jerry Jeudy, who some had projected to go in the top 10. He's been a star since Day 1 at Alabama and he'll pair with Courtland Sutton to give quarterback Drew Lock a formidable wide receiver combo.

The Falcons address one of their biggest needs: a cornerback. C.J. Henderson will come in from Florida and take the position. He’s the second-best corner in the draft. After Ohio State-product Jeff Okudah, Henderson is easily the next best at the position.

At No. 17 the Dallas Cowboys will take LSU linebacker/edge rusher K'Lavon Chaisson. With the departure of Robert Quinn, the Cowboys will look to get a top prospect on the opposite of DeMarcus Lawrence to help rush the opposing quarterback. Dallas also added Aldon Smith to a one-year deal, but he hasn't played since 2015.

No one thought it would happen, but here we are. The Miami Dolphins select Alabama quarterback Tua Tagovailoa with the No. 18 overall pick. After a much build up around Tagovailoa’s laundry list of injuries, the 2018 Heisman Trophy runner-up slid from the original projections which had him landing the No. 5 overall pick. But all is calm in the city of Miami as Tagovailoa still ends up on the roster.

The Jaguars continue to address their secondary in the first round and take Xavier McKinney. McKinney led Nick Saban's defense at Alabama and has been compared to Baltimore safety Earl Thomas. McKinney will play with a chip on his shoulder and be a force in the Jags’ new-look secondary.

The Eagles are desperate for a wide receiver, but since the 2020 draft class is loaded at the position, Philadelphia will hold off. Instead, the Eagles will choose Oklahoma linebacker Kenneth Murray with this pick. Murray, a third-team Associated Press All-American and first-team All-Big 12 honoree, will be a blue-collar player that will be beloved by Philadelphia.

The Minnesota Vikings have a few holes that need to be filled but the most glaring one is at cornerback. The Vikings select Alabama’s Trevon Diggs with the No. 22 overall pick. Diggs is a double threat, having played offense, defense and special teams for the Crimson Tide.

The New England Patriots begin their slow offensive rebuild, drafting Notre Dame tight end Cole Kmet. At 6-foot-6, 262 pounds, Kmet is a Rob Gronkowski-clone who will aid in the development of quarterback Jarrett Stidham. Bill Belichick loves the three-cone drill more than most and Kmet's 7.44 second time was among the top at the position. His 10.5-inch mitts and sound blocking don't hurt either.

The Saints will look to spice up the competition at cornerback by selecting A.J. Terrell. The biggest outlier on the team could be the cornerback position. Janoris Jenkins hasn’t been the most consistent cornerback in the league and adding Terrell could jolt the position.

After taking Trevon Diggs with their first pick, the Vikings will continue to load up on their defense with Yetur Gross-Matos. The Penn State product, had 9 1/2 sacks in 2019 and he will have the opportunity to thrive in a defense that features defensive end Danielle Hunter, and linebackers Anthony Barr and Eric Kendricks.

Miami got its stud offensive tackle and franchise quarterback earlier in the first round. This time, they switch to the other side of the ball and take LSU linebacker Patrick Queen. He's the latest in a long line of LSU linebackers, following Devin White and Deion Jones.

The Seahawks are still missing without defensive end Jadeveon Clowney and by selecting A.J. Epenesa in the first round it could either put pressure on the free agent to come to the negotiating table or send a clear message that the team is moving on.

Multiple reports suggest that the Baltimore Ravens will trade out of the first round, but if they are unable to, the Ravens will look to add to their offense to help out MVP quarterback Lamar Jackson. The Ravens, a team that has very few weaknesses, will add LSU wide receiver Justin Jefferson to their already potent offense. In his final season suiting up for LSU, Jefferson was on the end of 111 receptions from Joe Burrow in a national championship season for the Tigers. He also had 1,540 receiving yards with 18 touchdowns.

The Tennessee Titans take Auburn defensive tackle Marlon Davidson. The 6-foot-3, 300-pounder can team with last year's first-round pick, Jeffery Simmons to wreak havoc on AFC South quarterbacks. At this stage, Davidson might be a bit of a reach, but his ability to kick inside or outside on passing downs is too much for head coach Mike Vrabel and general manager Jon Robinson to pass up at this point.

With the No. 31 pick, the San Francisco 49ers will add LSU cornerback Kristian Fulton. During LSU's undefeated national title run in 2019, Fulton started all 15 games and had 38 tackles, an interception, and a team-high 14 pass breakups. Look for Fulton to step in and contribute to a secondary that features All-Pro cornerback Richard Sherman.

The Super Bowl champion Kansas City Chiefs need help at cornerback after losing Kendall Fuller in the offseason to the Redskins, but Georgia running back D'Andre Swift is too good of a value to pass up at this junction. The NFL's scariest offense just added another home run hitter.