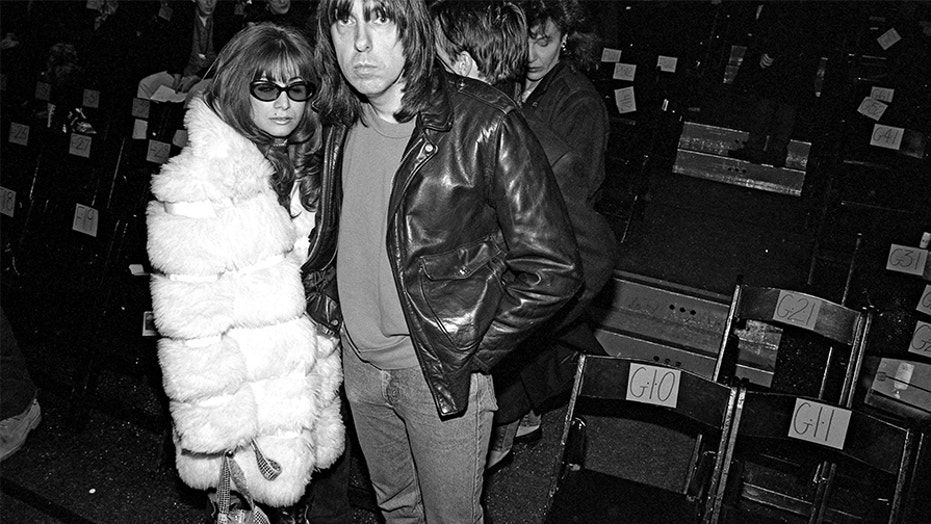 Linda Ramone is in the mood for love.

The widow of late punk legend Johnny Ramone has teamed up with Happy Socks for a collaboration inspired by her rock ’n’ roll love story with the guitarist. The special edition collection, titled Happy Socks x Linda & Johnny Ramone, features bold, colorful prints that reflect the various phases of their time together.

Johnny, described as “the stone-faced guitarist of the punk band the Ramones” by the New York Times, passed away in 2004 at age 55 from prostate cancer. Johnny, who was born John Cummings, was the third member of the band to die in a little over three years following singer Joey Ramone (Jeffrey Hyman), who also succumbed to cancer in 2001 at age 49, as well as bassist Dee Dee Ramone (Douglas Colvin) who died in 2002 at age 50 from a drug overdose.

Ramone spoke to Fox News about her romance with the rocker, how she’s keeping his legacy alive, the alleged love triangle involving Joey, as well as what her life is like today.

Fox News: How important has it been for you to keep the legacy of your late husband Johnny Ramone alive?
Linda Ramone: Very important. When Johnny was dying, he would talk about his legacy all the time. It was very important to him. So for him to put me in charge of his legacy – that was always the biggest thing he could ever do for me. He would always say, "I would rather be here keeping my own legacy alive. But if there’s one person I’m picking, it’s you."

And that was really big, especially at that time. Johnny was very sick, but he always did think about his legacy. He loved The Ramones. He loved being Johnny Ramone from The Ramones. And the legacy is now super important, especially since they all passed away.

Fox News: How did Johnny’s love of hobbies influence the designs for the Happy Socks collection?
Ramone: For Johnny, it was all about collecting. It all started when we were living in a one-bedroom apartment in New York City. He would always say, “When I retire.” That’s all you would hear from him – “When I retire.” Johnny was always plotting and planning his retirement (laughs). And we always knew we would move to LA because of the weather. We would go to LA in November and it would be so nice. But when we came back home to New York in March, it would be freezing. So we always knew retirement wasn’t going to happen in New York City. There’s just no way.

Linda Ramone said she and late husband Johnny Ramone always wanted a pool but they never made use of their diving board. (Happy Socks)

And we always wanted a house with a pool. When you’re sitting in New York City and it’s freezing cold for half the year, you’re always dreaming of what it could be like sitting by a pool. Even though both of us didn’t swim, we still wanted a pool. And we would collect movie posters but we didn’t have any space to put anything. There’s only so much decorating you can do with a one-bedroom. But we still kept collecting.

Johnny was all about baseball and horror. And together we collected Elvis. So when we got to retire and moved to LA, we had plenty of collectibles. We had an Elvis room already. We had a horror room... The first room that we walked into our house became the Elvis room. I collected a lot of ‘60s stuff and we bonded over ‘60s movies. I think that inspired the socks… All the inspiration just came from around the house and the memories we shared here.

Fox News: What do you believe was the secret behind your lasting marriage?
Ramone: First of all, collecting was a big thing for us. We shared hobbies together and bonded over that. I mean, young love is always different from any other love. But the fact is we grew together. And we actually became closer after Johnny retired and we moved to LA. Sometimes retirement can separate people.

Johnny Ramone (R) and wife Linda pose for a photo during fashion week in 1994 in New York City. ((Photo by Catherine McGann/Getty Images)

But we had the best time ever when we retired because we had all these amazing friends nearby and just a wonderful new life together. And for some odd reason, we just did things together. I think that’s really important in a relationship. Johnny also liked me dressing up, so that was another big thing for us. He always liked the way I looked… I would make my own dresses. For us, I think it was all about doing things together. And we genuinely enjoyed each other’s company.

Fox News: It’s been said you stayed in touch with ex-boyfriend Joey Ramone until his death.
Ramone: Yes — the negativity comes from the whole love triangle thing (laughs). People are always like, "Oh, she broke Joey’s heart." It was our first love, me and Joey. So it was very deep and it was amazing. But at one point, Johnny fell in love with me... When Joey [learned] Johnny was in love with me, it was either [accept it] or break up the band. None of us, the three of us, ever put each other first. The band always came first. That’s how it was. We all knew it.

So when it came time for Joey and me to break up, we understood. It was time to move on. Johnny was in love with me, I had been falling in love with Johnny. Joey knew that. For the first couple of years, I didn’t speak to Joey and then of all a sudden, this guy was doing a Ramones book. And out of the blue Joey called me. From that moment on, me and Joey always stayed in touch. I know people go, "Oh, you broke his heart." But Joey got another girlfriend right away after I left! He moved on. He had plenty of girlfriends after me. [But] we spoke. Me and him had a very nice, friendly relationship.

Fox News: Was Johnny aware you stayed in touch with Joey?
Ramone: Did Johnny know about it? No, because he would have never gone along with it. And I felt the most important thing was the band. It wasn’t like anything weird was going on. It was just something that… You know what? It just made the other person feel better about staying in the band. That’s what it was all about. Putting the band first. But everybody knew that though. But everybody else from the outside looking in? It’s hard for them to realize what the three of us were thinking and what was really going on.

But the three of us always knew that the band came first. And at times it was difficult. And then people go, "Joey and Johnny didn’t talk." You know what? Some of it is true. I’m sure the Rolling Stones don’t talk all the time. A lot of bands, after being together on the road all the time — nobody’s really that friendly off the road. But Joey sent Johnny a Christmas card every single year. And they did talk. But Johnny thought it was more punk for everybody to think nobody got along. He thought that was funny. And that was Johnny’s sense of humor. But in reality, we all made sacrifices for the band. And you know what? It was the best move we could have ever made because the band was the most important thing.

Joey (left) and Johnny Ramone posing for a portrait, circa 1988. (Photo by Niels van Iperen/Getty Images)

Fox News: What’s one memory of Johnny that still makes you smile?
Ramone: Well, the fact that he never dived off the diving board. All we talked about was wanting a swimming pool (laughs). And I never dove off the diving board either! I never swam in Rockaway Beach or Jones Beach.

Fox News: What do you hope readers will get from your love story with Johnny?
Ramone: Even though Johnny passed away, true love never dies. And I do like to celebrate the fact that we did have this amazing relationship and it was rock ‘n’ roll. We loved each other. I still love Johnny.

Even though he was traveling all around the world, we still managed to have this amazing relationship. We always came back to each other. And we made sacrifices for each other. The Ramones were my whole life, but it was an exciting life.