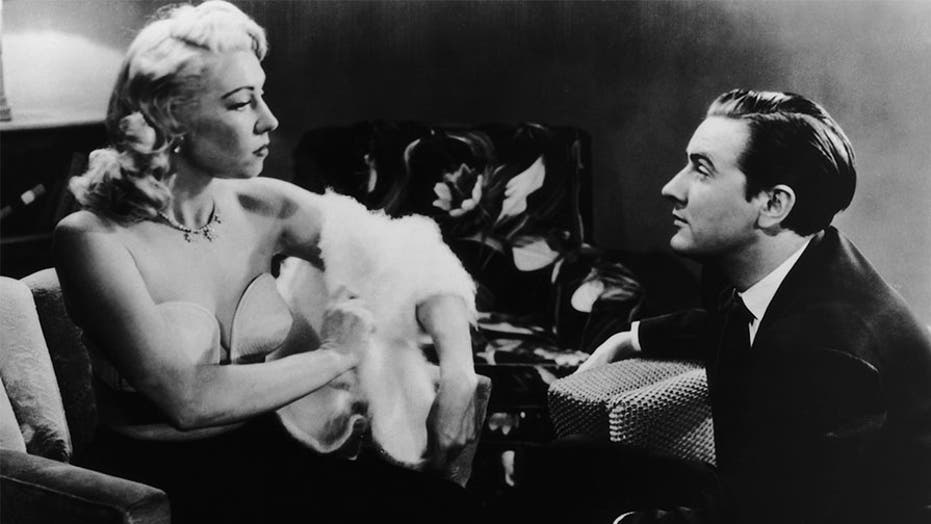 The "worst director of all time" is being resurrected once more.

The seemingly forgotten director's pictures ultimately led to an underground following among curious viewers. In 1994, he was the subject of Tim Burton’s “Ed Wood” starring Johnny Depp and Sarah Jessica Parker. Martin Landau, who portrayed Wood’s pal Bela Lugosi in the film, would go on to win an Oscar for best supporting actor.

Johnny Depp and Patricia Arquette on the set of "Ed Wood," based on the book by Rudolph Grey and directed by Tim Burton. (Photo by Touchstone Pictures/Sunset Boulevard/Corbis via Getty Images)

Bob Blackburn, who edited “Angora Fever” and wrote the forward, was a close friend of Wood’s widow, Kathy, who passed away in 2006 at age 84. Blackburn spoke to Fox News about befriending Kathy, Wood’s final tragic years and how his work was revived after his death.

Fox News: What inspired you to release this book now?
Bob Blackburn: It was an unspoken promise to Kathy Wood, Ed’s widow. She was with him for 28 years. … After she passed away, I learned there were these short fiction stories out there in the world that Ed wrote for these magazines in the late ‘60s, early ‘70s.

I’m being PC here when I talk about these magazines. But he would contribute these short fiction stories that would be of a sexual nature. He had a pretty vivid imagination for a pulp fiction writer. … But most fans and film scholars are unaware that these stories exist. … I think it shows a new side to Ed Wood from the one that we already know and the one that Hollywood showed.

Fox News: Kathy was originally your neighbor. What made her trust you?
Blackburn: I think that with time, she just felt like she could place her trust in me. It took her a little while though. At first, she was just a neighbor. When I learned who she was, I approached her very cautiously. At the time, a friend of mine told me Tim Burton was making a film about Ed Wood and I thought, “Geez, does she even know?”

I remember I knocked on her door. She opened just a crack, very reluctantly. I told her what I had learned and how I was happy to find out more information for her. She said yes, just for the heck of it. It all turned out to be true. I helped her find an entertainment lawyer who helped her tremendously … and so she could get some money too. At the time, she was basically on welfare and all these other low-income programs.

I think she realized she had found someone who genuinely cared about her, and we became friends. And we happened to live in the same building. I would visit her after work and we would go grocery shopping every Saturday. We would also watch movies. She would always say, “You’re like my younger brother.”

Fox News: As you got to befriend Kathy, what did you learn about Ed Wood?
Blackburn: They both went through a lot of ups and downs together. They were both alcoholics. They were always one step above the landlord, moving from place to place. They probably lived in about eight or nine different apartments or houses here in Hollywood.

At the end of 1978, they were evicted from their apartment, which is right directly behind where I’m living now. All she had was a suitcase with some personal artifacts in it. They stayed with an actor friend of Ed’s. And three days later, he died from a heart attack… It took her about a year or so to move back into this neighborhood, the building where we met.

Ed died penniless and on the streets, more or less. But years later, he’s listed in a book as the worst director of all time. Kathy never understood his whole cult following after he died. She would laugh about it and go, “It’s too bad Eddie’s not here to enjoy this. He would love the attention.”

Fox News: How did she feel about Johnny Depp’s portrayal of her husband?
Blackburn: He was trying to pick her brain about Ed. She just thought he was so cute and polite. She was invited to see a scene during filming. She brought Ed’s wallet and loaned it to Johnny Depp. And he kept it in his back pocket for the whole shoot of the film. He was beyond over the moon having a little piece of Ed Wood that he could carry with him while making this film.

Fox News: How did she feel about the film?
Blackburn: She was a little bit conflicted. She liked the film, but she didn’t like some of the scenes and some of the liberties that were taken. But she bit her tongue. She met Patricia Arquette, who played Kathy in the film. She would call her “my darling Patricia.”

Fox News: Going back to your book, how would you describe Ed at this point in his life when he was writing these stories?
Blackburn: He was on the edge of desperation, trying to make enough money to pay the rent every month. They were drinking quite a bit. But he was writing nonstop. For an alcoholic, he was a workaholic. He had this incredible imagination and was always feverish to write everything down.

Fox News: What exactly happened to Ed and Kathy that they were struggling to make ends meet?
Blackburn: He didn’t have a steady job. After he got out of the Marines, he moved to Hollywood where he dreamed of becoming a filmmaker and TV producer. He dreamed big. But at that time, Kathy was the only really working as a secretary, so they lived off her salary.

He did make a number of films, but it seemed that he was always struggling to get enough money to continue. So many of his films never got completed because they could never pay the bills. Some of those films have been discovered over the last 10 years or so. They couldn’t afford their rent. They would pack up in the middle of the night and be off somewhere else. It really was a downward spiral.

Fox News: How did he feel about Hollywood?
Blackburn: Based on my conversations with Kathy, I got the sense he felt beat down in this town. To be honest, he was not the most talented guy when it came to filmmaking. There have been critical books dedicated to his filmmaking.

But there was the alcohol. In Hollywood, there’s a lot of alcohol. People would go to parties, drink, and then wake up in the morning and head to work. It just wasn’t like that with him. And he also liked cross-dressing. … That was not a secret. He would go to business meetings dressed as a woman to see people he’d never met before. Imagine you’re going to make a movie with somebody and that somebody shows up in a skirt, wig and an angora sweater. But he was just an honest guy. He wasn’t gay, but he enjoyed dressing up.

Fox News: How did Kathy feel about Ed wearing women’s clothes?
Blackburn: She accepted it right away. She said, “I love this guy. He’s really smart, funny and that’s the man I fell in love with. What did I care if he wore a skirt? He had a big heart and that’s what matters.” And it took a sense of bravery for him to do that. Remember, we’re talking about a time period where you would probably get arrested for that in LA.

She would say sometimes she’d come down in the morning to get breakfast and he was already dressed up in his outfit working on a story in his typewriter. She told me a few times he went to what she called “drag parties,” where they would go to somebody’s house in Beverly Hills, a well-known personality, movie star or TV person. I’m not going to mention any names… but he would dress up and there wasn’t any weirdness about it. To Kathy, she just knew he was all man and at the end of the night, he was coming home with her.

Fox News: Did Kathy ever talked about some of the films that were never released?
Blackburn: Yes, there was one called “The Ghoul Goes West.” According to the story, Gene Autry was supposed to be in it. But when he saw some of Ed’s films, he said, “There’s no way I’m going to do anything with this guy.”… But that didn’t stop Ed. He just kept working all throughout his life.

Fox News: What were Ed’s final days like?
Blackburn: They were difficult. He had a sad ending to his life. His heart attack was brought on by his alcoholism, … They were actually going to take him to the VA hospital the next day, but he died that Sunday afternoon, watching a football game on TV. Kathy said he hated football. She never understood why he was watching it that day. I guess it was the only thing that was on.

He was in the back bedroom and from what I understand. He kept complaining, like, “Kathy, get me a drink, get me another drink.” They were trying to get him to stop so he could go to the hospital the following day. A couple of friends came over to check in on them because they heard they’d been evicted from their apartment.

Wood talks to actor Bela Lugosi on the set of the film "Glen or Glenda," 1953. (Photo by Archive Photos/Getty Images)

A woman who was a friend of theirs went to the back bedroom to say hi to Eddie. She went in and rushed out. She said, “I think he’s dead!” So they all rushed in. Kathy said, “His eyes were open like he’d seen the devil or death.” So they then closed eyes. It really freaked her out. She always wondered what could have happened if he’d had gotten sober. Might have lived long enough to see the cult success he ended up having.

Fox News: How did Ed develop such a cult following after his death?
Blackburn: It started with college campuses. People were searching out these films and having Ed Wood screenings. For the most part, it was people laughing at them. You know, they were so bad, they’re good. That’s how they first became known.

But it’s funny, Ed had a unique style and voice. Today, he’s very beloved by a lot of people. He has inspired writers and filmmakers to analyze his work. When we announced this book, there was a lot of excitement among his fans who’ve been following his work for decades now… It allowed them to see a new side to Ed and how creative he was when came to taking on taboo subjects. Kathy would’ve loved the attention her darling Eddie still getting today.