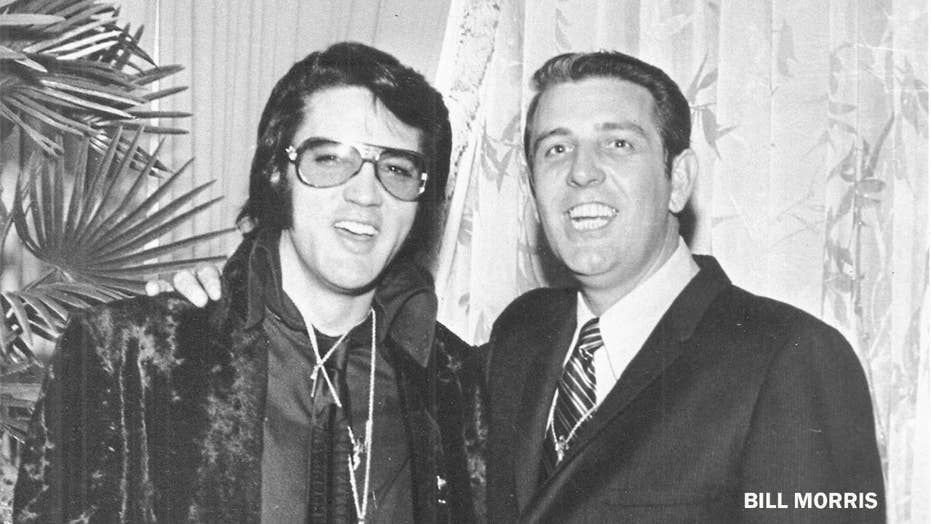 It was about 60 days before the king of rock ’n’ roll died on Aug. 16, 1977, at age 42 from a heart attack, which was likely brought on by his addiction to prescription barbiturates.

“I get a call from the house,” Morris recalled to Fox News. “The guys that were close to him said, ‘Let’s go to the movies tonight.’ I said ‘OK.’ I caught up with him about 11 p.m., my wife and I, and the movie had already started. And I couldn’t believe it when I saw him walk back to see us. He had gotten so huge. Put on so much weight.”

“And my wife [Ann] always bugged him, sort of like mothering him all the time, because they’ve known each other for so many years,” he continued. “And she hugged him. We all hugged each other. And everybody had tears in their eyes because he looked so bad and felt so bad. Any my wife scolded him at that time. He said, ‘I’m gonna be better.’ And with that, we sat down. The next time I saw him he [had] passed away.”

The 86-year-old, who was the Shelby County Sheriff the night Martin Luther King Jr. was assassinated in 1968, recently published a memoir titled “Bill Morris: A Legendary Life,” which chronicles the many fascinating personalities he’s encountered along the way in Tennessee.

He first met a yet unknown Presley at his soon-to-be wife's high school graduation in Memphis’ Humes High School. However, their unlikely connection goes even further back.

Elvis Presley in his final years. (Photo by Ron Galella/WireImage/Getty)

“Elvis and I both grew up in the same post-Depression years in north Mississippi,” Morris explained. “About the same time, we migrated to Memphis. His parents knew my parents before either of us were born. And then, of course, I went into the Army after his graduation. By the time I came back, two, three years later, he had already done big things in the music industry.

“And then I got to know him from then on. By then I became sheriff. He stayed here in Memphis as often as he could. We gave him Sheriff’s Department protection, our service, and we got to become close friends. We then found out we both came from the same place. And so it was a natural thing for us to become good friends.”

Morris said when he began bonding with Presley in his 20s, the charismatic singer relished his time in his beloved Memphis, far away from Hollywood or even being on the road.

It was in 1957, while Presley was completing his second Hollywood movie, “Loving You,” and his first film soundtrack album, when he put a down payment on a southern colonial mansion on the outskirts of Memphis. According to History.com, the 22-year-old had two studio albums and 48 singles under his belt, as well as two years of nearly nonstop live appearances behind him.

ELVIS PRESLEY 'WAS MY FIRST LOVE'

One of Morris’ favorite memories of Presley was the practical jokes he played on Graceland, the refuge he would call home until his death.

“I was a salesman,” said Morris. “And I had a very inexpensive suit on one day. He calls and says, ‘Won’t you stop by and say hello?’ So I get to Graceland. And I’m wearing a polyester suit of all things. That’s all I could afford at that time. And so [all the guys] were behind Graceland with Roman candles and fireworks and garbage can lids, shooting at each other. I thought, ‘This has gotta be the craziest thing I ever did.’ But I stayed. We played. I went home and I had a suit that looked like Swiss cheese… He was just a normal guy doing normal things. That always impressed me.”

Morris shared that throughout Presley’s life, he had a deep respect for law enforcement and would have likely pursued that role if it weren’t for his thriving music career.

Rock and roll singer Elvis Presley strolls the grounds of his Graceland estate in circa 1957. (Photo by Michael Ochs Archives/Getty Images)

“He really got involved in law enforcement and support initiatives to deal with drug abuse — illegal drugs particularly,” explained Morris. “And when he wanted to go see the director of the FBI, J. Edgar Hoover, I agreed to make the arrangements. And we went to Washington to meet him and to visit with some of the guys. And meanwhile, I took him to the National Headquarters of the National Sheriffs’ Association. His question was, ‘Why can’t we be members?’ So he made every one of his bodyguards become a member. And after that, it became known everywhere he went, sheriffs, chief of police, would invite him and give him an honorary badge. He thought that was a big thing. Here at Graceland, you’ll see a big collection of badges all over.”

“He was absolutely a strong supporter of law enforcement,” Morris continued. “I made him a deputy when I was a sheriff. Every sheriff since that time before he died made him a deputy. He was a part of the guys in the sheriff’s department here in Memphis.”

Bill Morris admitted Elvis Presley did not look like himself the last time they saw each other. — Getty

Morris admitted he still couldn’t believe Presley was gone — even while staring into the face of his beloved friend as he laid in his casket.

“I just couldn’t accept the totality of it all,” said Morris. “He was in this casket, but I couldn’t believe he was dead. He was just 42 years old. I didn’t really want to accept it even then.”

One of the misconceptions Morris wanted to address about Presley in his book was those tumultuous later years where he faced a physical decline over his dependency on prescription drugs.

PRISCILLA PRESLEY SAYS ELVIS WAS DETERMINED TO IMPRESS HER PARENTS

“I think a lot of people thought he was on bad drugs, street drugs,” said Morris. “He never was. He did take a lot of drugs, prescription drugs, that would undoubtedly harm him, but he never messed with things like marijuana, opium — none of those kinds of drugs you would buy on the street. That is one misconception.”

“The second misconception is that he was a loner,” shared Morris. He wasn’t. He loved to be around people. And if he didn’t have people around him, he was nervous. He was people-oriented. I liked that about him… We could bring 20, 40 people down to have a little party at his house and he was just one of the guys. He never grew beyond a good personal relationship with the people he grew up with. I thought that was a magnificent attribute.”

Morris served as Sheriff from 1964 until 1970. He would go on to serve four terms as Shelby County Mayor from 1978 until 1994. After an unsuccessful campaign for governor in 1994, he retired from politics. Three years later his wife suffered a major stroke. He became devoted to Ann’s care until her death in 2016.

Today, he hopes to shed new light on his pal, a reigning music icon whom he feels is still greatly misunderstood.

“I can’t believe even to this day, 42 years later, the power of Elvis Presley’s name is unbelievable worldwide,” said Morris. “That says a lot about his music, his personality and the person he was.”