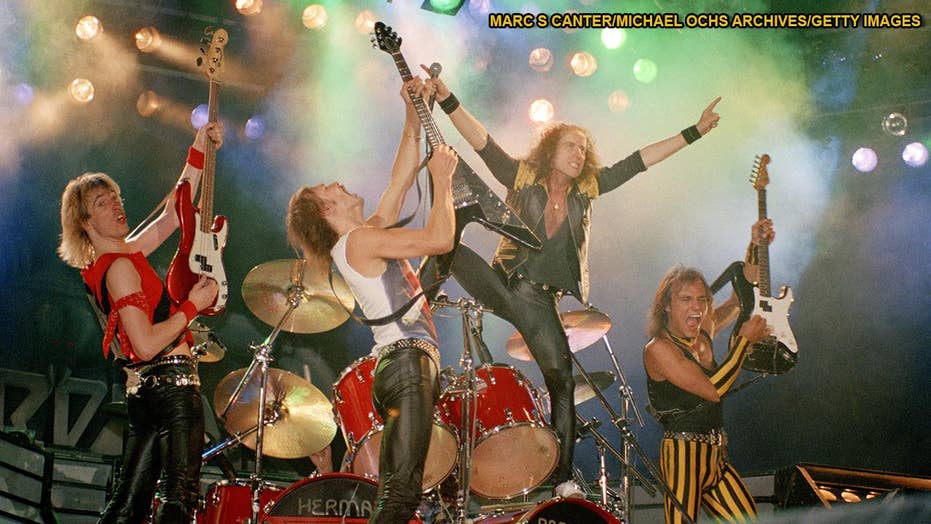 Scorpions reveal inspiration behind ‘Rock You Like a Hurricane,’ favorite ‘crazy’ moment on stage

Rockers Klaus Meine and Matthias Jabs of Scorpions reveal the inspiration behind hit ‘80s anthem 'Rock You Like a Hurricane,' favorite 'crazy' moment on stage before gearing up for their Las Vegas residency.

Scorpions are coming to America in 2020 and ready to rock Sin City like a hurricane.

The German band, best known for their hit ‘80s single, “Rock You Like a Hurricane,” are gearing up to take over the strip this summer with a new residency titled “Scorpions Sin City Nights” at Zappos Theater in Planet Hollywood Resort & Casino.

While the news will excite longtime fans, it’s just business as usual for the group, who have been rocking out since 1965. To date, Scorpions have sold more than 100 million records around the world and have made their mark with other tracks, such as “Still Loving You” and “Dynamite,” among others.

Frontman Klaus Meine and lead guitarist Matthias Jabs spoke to Fox News about the inspiration behind “Rock You Like a Hurricane,” surviving the ‘90s grunge era and their most favorite moment on stage all thanks to several brave fans.

Fox News: Looking back, where did the idea for “Rock You Like a Hurricane” come from?
Matthias Jabs: We recorded that song in 1983 as soon as we returned from the U.S. Festival in San Bernardino, one of the biggest shows we've played with more than 300,000 people.

And we went back to the studio and the song was half ready. [When] we finished [the song] it came out with the album “Love at First Sting” in 1984. And we had the feeling this album was bringing us like… a storm, a hurricane, to the U.S. And it made us very successful. It pushed us around the country. I think we played nine months in a row. This song is [to this day] a trademark song for the Scorpions.

Fox News: Describe one of your favorite moments on stage.
Klaus Meine: I remember playing the United States, I think it was St Louis… there were a couple of fans. They thought it would be a nice and crazy idea to throw some live scorpions, some real scorpions, up on stage. And it came like a shock. We, all of a sudden, saw those little creatures crawling all over the stage amongst the band. We made sure they made it out alive and they were on the safe side. But it was a nice fan moment bringing us together with the scorpions.

Fox News: What do you miss the most about the ‘80s?
Jabs: The ‘80s were everything, a fun party time. … People came up with crazy ideas, great songs. If you listen back, it was also the decade of guitar players. It was a very creative time also in terms of looks and designs.

The hair, the clothing, the stage designs — everything got bigger and more sophisticated and more colorful. And some people thought it was overproduced towards the end of the ‘80s. It's probably true. But it was also fun and there was a certain competition among the big bands going on — who got the most spectacular production. And this is something you take for granted these days. But in those days… everything you did was new and it felt exciting. It was a fantastic decade for us and many other rock bands.

Fox News: How did the band survive the ‘90s grunge era?
Meine: Well, I think [it was] pretty difficult throughout the ‘90s with all the alternative music coming around. How we survived? I mean we just kept going. We played many, many shows. We did many tours in Southeast Asia for example. All throughout the ‘90s, the Scorpions were very successful and we came home with multi-platinum albums.

Klaus Meine, right, said he was eager to take on daring musical projects after the '80s came to an end. (Henry Herrmann/Getty Images)

We tried to balance it out. And in 2000 actually… we did a project with the Berlin Philharmonic Orchestra doing a symphonic project, which was something we've never done before. It was so brand new and so inspiring to do something else. And so that’s how we survived those years when grunge and alternative were so mega, mega strong. Not only in the U.S. but all over the world. But… we did it and we came back with a strong rock album around 2003. Then we took it from there. It was like a circle. There was a whole new generation of rock fans, of classic rock fans. And since then we keep going.

Scorpions have been rocking out since 1965. (\Richard E. Aaron/Redferns/Getty)