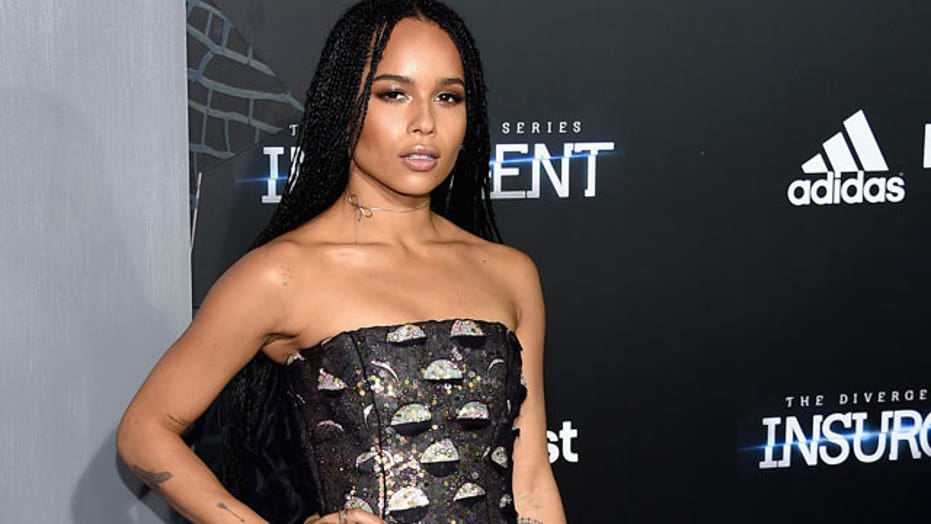 PASADENA – If there are two things Zoë Kravitz is well-versed in, it’s music and fashion.

The 31-year-old daughter of actress Lisa Bonet and musician Lenny Kravitz is stepping into the shoes of Bonet in recreating her mother’s 2000 film “High Fidelity,” which also starred John Cusack as Rob Gordon, the owner of an old-school vinyl record store that's hanging on by a thread.

In the reboot of the cult favorite, “High Fidelity” has been turned into an original series from Hulu and sees Kravitz as Rob Brooks, a female record store owner in the ever-changing gentrified neighborhood of Crown Heights in Brooklyn, who uses the power of music to push her through the various relationships she encounters in her life.

Kravitz spoke to journalists at the Television Critics Association winter press tour at the Langham Huntington in Pasadena, Calif., last month and opened up about getting the chance to play in a similar sandbox her mother did in the original feature film and how the culmination of music and fashion helped Kravitz put her own stamp on the project.

The “Fantastic Beasts” actress told reporters that she didn’t quite have the opportunity to visit her mother when Bonet was filming the original film, seeing as the movie was shot in Chicago and, at the time, Kravitz was still a young woman staying with her grandmother while going to school in Los Angeles.

Kravitz said that in preparing to shoot the reboot, she hadn’t spoken to her mother about the project but that Bonet couldn’t contain her excitement in learning her daughter would be relighting the torch.

Kravitz continued: “I didn't talk to John Cusack. I talked to Stephen Frears a bit and I talked to [novelist] Nick Hornby a lot, he was a producer on the show and me and him would exchange playlists and talk constantly. We just became very close over the process. To me, obviously, he's... We wouldn't be here without him. So having his blessing and his input was really important to me.”

For her part, Kravitz was asked about her distinctive appearance in “High Fidelity” in which the singer and model sports a number of graphic T-shirts paying homage to the bands of the 1990s. Kravitz said choosing her look for her character was one of the many highlights she experienced while filming the season.

“No, I wasn't dressing like myself. But it was important for the look of the show, the look of Rob [Brooks] to be very specific,” she explained. “'Sex and the City' was a huge influence for me and I think the way that Carrie [Bradshaw] dresses was always... just it was almost like another character in the show and it made it so fun to watch and to see what she was going to wear next.”

“So I wanted to try and create something that had a similar effect. So it's not like me, but I mean, I like the clothes. I would wear them," she said.

Kravitz explained to journalists in the room that production struggled to find a costume designer with a vision that could be brought to life in the specific manner they felt was needed for the overall authenticity of the show.

“We had Colleen Atwood do the costumes, who is a legend,” Kravitz raved of the designer. “I had worked with her on "Fantastic Beasts" and we were having a really hard time finding someone to do the costumes and that was a really important element to the story and the show to me.”

“And I had called Colleen asking her if she knew someone that would do it because I knew she wouldn’t do it because she did f------ ‘Silence of the Lambs,’" Kravitz continued. “Like, you know, it's not happening. And I called her and said, ‘Do you know someone?’ and that we need someone and it was starting really soon.  And she said, ‘I love 'High Fidelity.' I love you. I'll do it.’”

Kravit added: “And we were all in shock. I remember calling you [Da’Vine Joy Randolph] and I called Scott [Rosenberg] and I said, ‘I think I found someone that you'll be happy with’ – because he wasn’t happy with anybody – and he said, ‘Who?’  And I said, ‘Colleen Atwood, she wants to do it.’ And it got really quiet. And then he went, ‘Why?’”

Amid the laughter from the reporters in the room, Kravitz maintained that she was “blessed” that Atwood, 71, jumped at the opportunity to dress the cast, adding that working alongside the four-time Oscar-winning designer was a “dream come true.”

“Me and Colleen would go to all these vintage stores together and they would tailor their clothes to me,” Kravitz said of the 12-time Oscar-nominee.

“I stole a lot of s---,” she quipped. “I have a lot of the clothes from ‘High Fidelity.’ And then I brought a lot of my own stuff. Like, that robe in that photo was my personal robe. A lot of the band T-shirts were mine too. So we had a lot of fun with it.”

When pressed on her favorite look from the show, Kravitz surprised many in revealing she especially loved all of the various Hawaiian shirts.

In October 2019, it was widely reported that Kravitz would join “Twilight” franchise star Robert Pattinson in “The Batman.” Kravitz said she was excited to infuse strong female power into the flick through her role as Catwoman.

“I think femininity means power and I think it's a different kind of power than masculine power,” she said. “And that's something I think is really interesting about Batman and Catwoman. I think Batman represents a very masculine power and Catwoman represents a very feminine power -- slightly more complicated and softer too. I like the idea that it can be soft and be gentle and still be very powerful and still be very dangerous.”

Additionally, if there was ever a question about Kravitz’s signature hairstyles -- the actress said her iconic dreadlocks absolutely “made an appearance” in “High Fidelity.”

“Who let this man in the room talk about am I wearing a wig?” Kravitz joked. “You’re not supposed to ask that question.”

"High Fidelity" is set to be released on February 14 on Hulu.