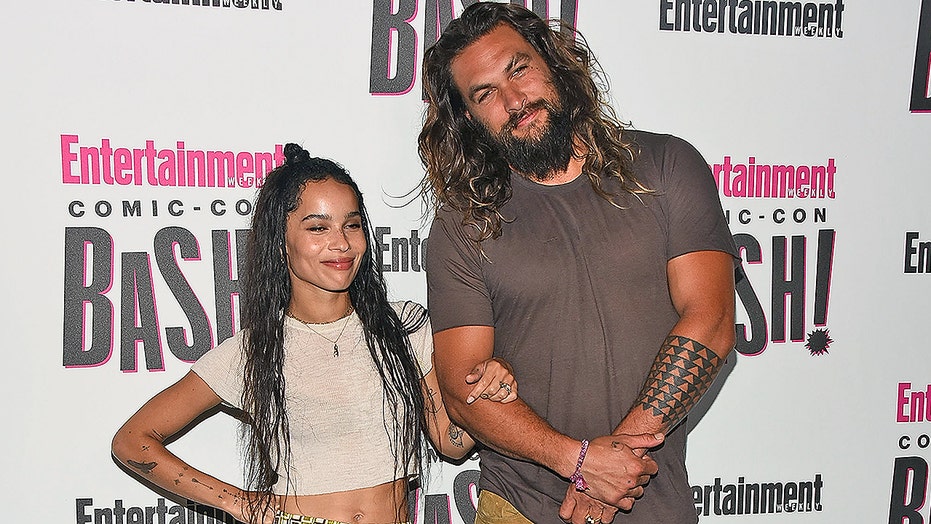 The “Aquaman” star is married to Kravitz’s mother, Lisa Bonet, with whom he shares daughter Lola, 12, and son Nakoa-Wolf, 10. The “Big Little Lies” actress, 30, is from Bonet’s previous relationship with Lenny Kravitz.

Zoe married Glusman in a surprise ceremony in June and captioned a recent picture of him with pink hair, “Husband.”

“Sexy mother f---er,” he wrote in one comment (via Comments by Celebs).

“Pink on pink looks good,” he said in another.

Momoa has been with Lisa Bonet since 2005 and has since developed a very close relationship with his stepdaughter and her extended family. People reports that she calls him “papa bear.”

JASON MOMOA CALLED OUT FISHERMAN THAT MUTILATED A SHARK: 'NEVER HAVE I WANTED TO HURT A HUMAN AS MUCH AS I DID'

“Our families are blended. I love her husband – he’s like a brother to me – and I love the kids. It’s beautiful, but it takes work,” the singer told U.K. newspaper The Times.

Zoe announced her marriage in June but usually keeps her relationship with Glusman as private as possible. She previously opened up to Rolling Stone magazine about how her then-fiance popped the question, revealing that their competing schedules ruined his initial plan to propose in Paris. Instead, he opted for their living room.

“I was in sweatpants. I think I was a little drunk,” she said. “[But] he nailed it. And I love that it wasn’t this elaborate plan in Paris. It was at home, in sweatpants.”