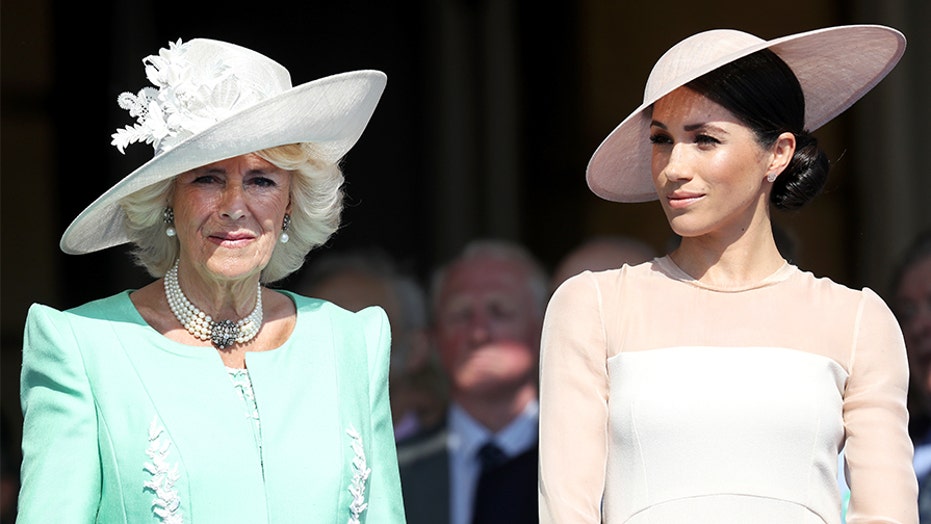 Camilla, Duchess of Cornwall, has been a “pillar of support” to Meghan Markle after the Duchess of Sussex admitted in a shocking documentary that the ruthless press scrutiny meant she was “existing, not living.”

“I think Camilla was probably just as surprised as anyone else when the documentary came out and perhaps didn’t realize how much Harry and Meghan were suffering,” a source close to Kensington Palace told royal expert Katie Nicholl for Vanity Fair on Thursday. “She wants everyone to get along and be happy. Her mantra is carry on and keep smiling. She doesn’t want to see anyone struggling and she is fond of Meghan and she could be a very good ally too.”

Nicholl shared that Camilla, who officially became a member of the British royal family when she married longtime love Prince Charles in 2005, is known for steering clear of family politics, as well as the personal lives of Markle’s husband Prince Harry and his brother Prince William. However, she is well respected within the palace for her “genuine and compassionate nature.”

Camilla, Duchess of Cornwall and Meghan, Duchess of Sussex attend The Prince of Wales' 70th Birthday Patronage Celebration held at Buckingham Palace on May 22, 2018, in London, England. ((Photo by Chris Jackson/Chris Jackson/Getty Images)

Royal biographer Sally Bedell Smith pointed out the 72-year-old is the ideal royal to advise the 38-year-old, as someone who also married into the royal family and faced the tabloids for years.

Camilla was famously the subject of tabloids leading up to the 1996 divorce of Charles and Princess Diana of Wales. She was also targeted by the media when tapes of her phone calls with Charles, now 70, leaked to the press in 1993, resulting in what is now known as “Camillagate.”

Their relationship survived the numerous scandals and today, Camilla is viewed by the public as a royal dedicated to her duties.

“I think Camilla can easily empathize with Meghan because of what she went through in the media,” Smith explained. “At one stage, no one was more beleaguered by the tabloids than Camilla, but she was shrewd enough to know that antagonism would get her nowhere.”

“Meghan could learn an enormous amount from Camilla,” Smith continued. “I think Camilla is genuinely a kind person and while there are many differences the two of them, they have both been on the receiving end of some very negative press. The thing Camilla learned was how to cultivate a relationship with the press. I have watched her talk to reporters, be friendly with the photographers and win over the tabloids who had once tried to ruin her.”

Camilla isn’t the only royal who’s extending a helping hand. Nicholl shared Duchess of Cambridge Kate Middleton has been in contact with Markle and is attempting to forge a better relationship between the couples after Harry hinted rumors of a sibling feud with William were true.

“On Sunday the erstwhile Fab Four will be together for the first time since the documentary aired at the Remembrance Sunday service at the Cenotaph in Whitehall, their first joint appearance since they were photographed at a polo match in the summer,” said Nicholl.

Markle and Harry recently spoke out about how the negative press attention hurt their family for the ITV documentary “Harry & Meghan: An African Journey,” which follows their royal tour in southern Africa.

When British journalist Tom Bradby asked Markle how she’s coping with the lack of privacy and ongoing tabloid rumors as a new parent, the former American actress replied she takes “each day as it comes.”

“I think the grass is always greener,” explained the former “Suits” star. “You have no idea. It’s really hard to understand what it’s like. I know what it seems like it should be, but it’s a very different thing.”

Markle said before she tied the knot with Harry, 35, some of her friends warned her that becoming a member of the royal family would mean being under the constant glare of the public spotlight and losing your privacy.

MEGHAN MARKLE'S ESTRANGED HALF-SISTER SPEAKS OUT ABOUT DOCUMENTARY: 'SHE KNEW EXACTLY WHAT SHE WAS DOING'

Markle also got candid with Bradby about the negative attention she has received from the media during her pregnancy and first months with Archie, who was born in May.

Britain's Duke and Duchess of Sussex, Prince Harry and his wife Meghan Markle hold their baby son Archie as they meet with Archbishop Desmond Tutu at the Tutu Legacy Foundation in Cape Town on Sep. 25, 2019. The British royal couple are on a 10-day tour of southern Africa -- their first official visit as a family since their son Archie was born in May. (Getty)

Still, Markle said Harry and their son have helped get through tough times.