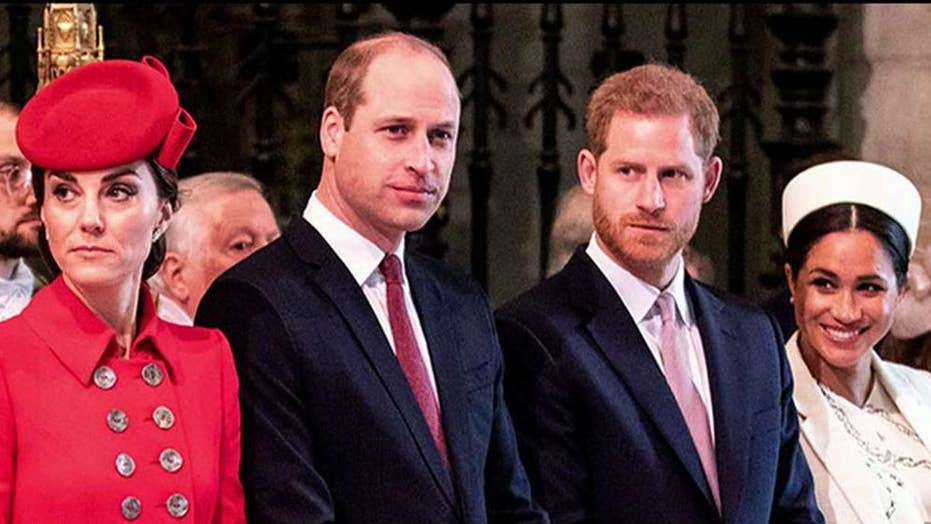 Buckingham Palace responds to report that Prince Harry, Meghan Markle are being shipped off to Africa

The duke and duchess of Sussex are reportedly so popular that their superiors in the palace want the spotlight back on them; Jonathan Hunt reports.

Prince William and his younger brother Prince Harry stirred headlines over the weekend when they appeared noticeably distant during church services — but some royal experts say the future king of England still has great love for his sibling.

“William is very protective of Harry,” Katie Nicholl told Fox News. “He loves Harry. There has always been an unbreakable brotherly bond… I’m not sure the relationship is what it used to be. But relationships evolve over time and I think theirs was always going to change when Harry married.”

PRINCE HARRY 'WANTS TO BE HIS OWN PERSON'

Nicholl, a British best-selling author and royal correspondent for Vanity Fair, recently published “Harry and Meghan: Life, Loss, and Love,” which presents an in-depth look at Harry’s romance with former American actress Meghan Markle and how their high-profile union is reshaping the monarchy. It features interviews with friends close to the couple, those who have worked with Harry, as well as palace aides, among others.

Prince Harry and Prince William are said to be feuding ever since Prince Harry's whirlwind romance with now-wife Meghan Markle began. (Getty)

Nicholl said “there have been issues over a number of factors” between William, 36, and Harry, 34. And some of those disagreements possibly occurred when Harry began dating Markle, 37.

“William wanted to make sure that Harry was making the right decision,” continued Nicholl. “And I think what was intended as well-meaning, brotherly concern and a bit of advice went down quite badly with Harry, who felt that William wasn’t being as supportive as he might’ve been. So there has certainly been tensions between the brothers.”

Millions in the U.S. tuned in to watch Prince Harry and Meghan Markle tie the knot. (Reuters)

Harry and Markle officially tied the knot in May 2018 during a televised ceremony. The couple, due to welcome their firstborn sometime this spring, recently left Kensington Palace for Frogmore Cottage, on Queen Elizabeth II’s estate. The move will separate the duo from William and his wife, Duchess of Cambridge Kate Middleton.

Nicholl shared that according to her sources, the move was much-needed for the brothers.

“Moving forward, with the benefit of not living on top of each other at Kensington Palace and with the infrastructure of having their own household, I think the relationship will go from strength to strength from now on,” she said. “I hope so because they’re not just two of the world’s most popular princes, they’re two of the world’s favorite brothers.”

And while William initially expressed concerned over Harry’s relationship with Markle, Nicholl said he’s realizing that Markle is giving Harry some stability.

“I think William sees how happy Meghan makes Harry,” said Nicholl. “I think he’s quite impressed by Meghan, her work ethic, how quickly she’s adapted to royal life. Of course… the jury is still out. But actually, I think William has realized that Meghan is probably the best thing to happen to Harry. And their father Charles, the Prince of Wales, thinks Meghan is wonderful.”

The Sunday Times recently reported Markle and Harry may work abroad, possibly in Africa, while William focuses on becoming the future king of England. Courtiers have reportedly drawn up plans to hand the couple a major international job that could see them moving abroad after the child’s arrival. The report claims Harry’s advisers are working on a “bespoke” role for the royal “rock stars” that will land them most likely in Africa. The surprising gig will combine some work on behalf of the Commonwealth, as well as charity work and a role promoting Britain.

The U.K.-based publication shared the plan has been drawn up by Sir David Manning, the former British ambassador to the U.S. and special adviser on constitutional and international affairs of Harry and his older brother Prince William.

Lord Geidt, Queen Elizabeth’s former private secretary, is also reportedly involved in the discussions. He is chairman of the 93-year-old monarch’s Commonwealth Trust, an organization that champions young global leaders. Harry and Markle serve as president and vice president.

According to The Sunday Times, the post would give the couple a chance to escape the divisions that have rocked the royal household in recent months while “harnessing” their global appeal for Britain. Harry also has close links to several African countries and has visited the continent since his teens.

Back in February of this year, Nicholl participated in the TLC documentary “Kate V. Meghan: Princesses at War?” which aimed to examine whether there is any truth to the speculation of unrest following Markle becoming part of the British royal family.

Prince Harry (left) and Prince William may have clashed over Meghan Markle. (Getty)

In the documentary, Nicholl claimed that William was increasingly worried for his brother and his whirlwind romance with Markle following their engagement in late 2018.

“William was quite concerned that the relationship had moved so quickly,” Nicholl claimed at the time. “And being close to Harry, you know, probably the only person close enough to say to Harry, ‘This seems to be moving quickly. Are you sure?’ And I think what was meant as well-intended brotherly advice just riled Harry.”