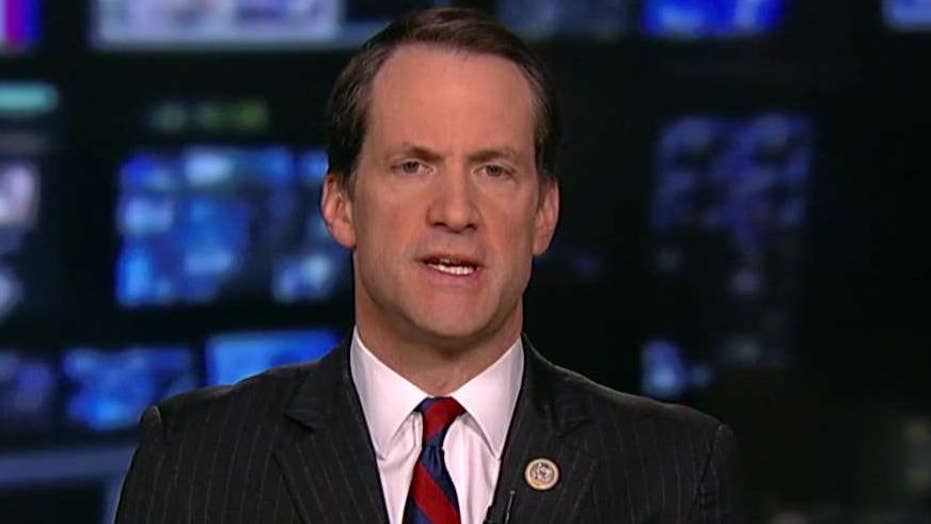 1,159-PAGE BIPARTISAN BORDER COMPROMISE COMPLETED, TRUMP UNCLEAR ON SUPPORT: Congressional bargainers late Wednesday completed a 1,159-page border security compromise that gives President Trump less than a quarter of the $5.7 billion he wanted to build a wall with Mexico ... Summaries of the legislation say that besides nearly $1.4 billion to build new barriers, there's over $1 billion for other border security programs. That includes money for inspection equipment for border ports of entry. There is more than $400 million in humanitarian aid for detained migrants plus funds to buy aircraft and to hire 600 more customs officers and additional immigration judges.

Lawmakers have until 11:59 p.m. Friday to get the agreement through both houses of Congress and signed by Trump before several Cabinet-level departments shut down and hundreds of thousands of federal workers are furloughed in what would be the second partial government shutdown this year. The measure would begin reducing the number of unauthorized immigrants the Immigration and Customs Enforcement agency can detain. Congressional approval is expected Thursday and Trump's signature is considered likely.

HOUSE DEMOCRATS PLANNING EXPANSIVE TRUMP PROBES, EVEN AFTER MUELLER REPORT: No matter when and how Special Counsel Robert Mueller's Russia probe ends, House Democrats are planning to aggressively ramp up their own Trump-related investigations that will include a network of committees and high-profile public hearings likely to last well into the 2020 election year ... It is unclear at this point when the special counsel’s investigation into Russian meddling and potential collusion with Trump campaign associates will be complete, though several officials have said the probe is nearing its end.

But the Mueller report will not mark the end of Russia investigations. House Democrats have ramped up their own efforts to investigate the president on matters related to Russia, his personal finances, his relationships and communications with foreign officials, and more.

REP. LIZ CHENEY ENTERS DRAFT SUMMARY OF GREEN NEW DEAL INTO CONGRESSIONAL RECORD: House Republicans announced Wednesday that they have entered an outline of the controversial "Green New Deal" and a list of frequently asked questions (FAQs) about the sweeping Democratic proposal into the Congressional Record after the document was deleted from the website of Rep. Alexandria Ocasio-Cortez, D-N.Y. ... "It's very important the American people see that there be transparency about what [Democrats] are pushing," Rep. Liz Cheney, R-Wyo., told reporters at the House GOP's weekly press conference. "And we call on (House) Speaker (Nancy) Pelosi, (D-Calif.), to put this up for a vote on the floor."

Cheney's request for Pelosi to put the Green New Deal resolution up for a vote on the House floor follows a similar move from Senate Majority Leader Mitch McConnell, R-Ky., who said Tuesday that he would bring the matter before the upper chamber of Congress to "give everybody an opportunity to go on record."

OMAR GRILLS TRUMP ENVOY TO VENEZUELA AFTER BOTCHING HIS NAME: U.S. Rep. Ilhan Omar, D-Minn., blasted President Trump’s special envoy to Venezuela on Wednesday over his history of supporting right-wing governments in Latin America and his guilty plea in 1991 to two misdemeanor counts of lying to Congress but started by called him the wrong name ... Omar called Elliott Abrams, the envoy, "Mr. Adams." She went on to ask why he should be believed Wednesday after previously withholding information decades ago about the Iran-Contra affair.

A heated exchange ensued, in which Abrams said it was an "attack." Omar later posted a video of the interaction, tweeting "Peace. Justice. Human Rights. Those are the values I hold dearest and I will not apologize for them." But she left out the part where she called Abrams the wrong name.

Abrams also told the committee that he believes increasing international pressure will eventually lead to the ouster of President Nicolas Maduro. He did not predict when Maduro would step down. But Abrams said “a storm is brewing” inside his government and the Venezuelan leader “will not be able to weather it much longer.

MINNESOTA MAN PLEADS GUILTY TO SEXUALLY ASSAULTING 2 DAUGHTERS IN 'HOUSE OF HORRORS': A Minnesota man admitted Wednesday to physically and sexually abusing his developmentally disabled twin daughters over the course of several years in a case the local media dubbed a "house of horrors" affair ... Jerry Lee Curry, 52, pleaded guilty to one count of first-degree assault, one count of first-degree criminal sexual conduct and one count of endangering a child, reported KSTP, citing court records. Curry, arrested in February of last year, is scheduled to be sentenced Feb. 20.

The Minneapolis Star-Tribune reported that doctors who examined the women found that they had suffered injuries that were "clinically diagnostic of torture." He twice impregnated one of the daughters, authorities said. A spokesman for the Hennepin County Attorney's Office told the paper that Curry was expected to receive 30 years in prison.

COLOMBIAN PRESIDENT IVAN DUQUE MARQUEZ ON HIS MEETING WITH PRESIDENT TRUMP TO DISCUSS THE CRISIS IN VENEZUELA - "...Also, we talked about this situation in Venezuela, and we share the commitment that the dictatorship in Venezuela must come to an end and that there has to be an opportunity for the Venezuelan people to rebuild their institution ... We have built a diplomatic blockade that has put the regime under pressure..." - Colombian President Ivan Duque Marquez on Special Report with Bret Baier calls for an end to the Maduro regime and a rebirth of democracy in Venezuela. WATCH.

Trump, Newsom spar over California scaling back $77B bullet train

Taxpayers hit back over IRS refunds

These are the 20 richest towns in the US

Not a subscriber? Click here to join Fox Nation today!

The Fox News Rundown podcast: Today marks one year since seventeen people were murdered at Marjory Stoneman Douglas High School in Parkland, Florida, shot to death by a former student. Andrew Pollack lost his daughter that day and he rejoins the podcast to talk about living without her, and what he’s been doing since that day to find justice.

Prosecutors from New York’s Southern District have subpoenaed documents from President Trump’s inauguration committee to look into fundraising before and after the 20-16 election. FOX’s Senior Judicial Analyst Judge Andrew Napolitano discusses the investigation.

Plus, commentary by Senior Fellow at the Center for the National Interest Christian Whiton.

2018: A gunman identified as a former student opened fire with a semi-automatic rifle at Marjory Stoneman Douglas High School near Fort Lauderdale, Florida, killing 17 people in the nation's deadliest school shooting since the attack in Newtown, Connecticut, more than five years earlier.

1929: "St. Valentine's Day Massacre" took place in a Chicago garage as seven rivals of Al Capone's gang were gunned down.

Fox News First is compiled by Fox News' Bryan Robinson. Fox News' Amy Lieu contributed to this newsletter. Thank you for joining us! Have a good day! We'll see you in your inbox first thing Wednesday morning.