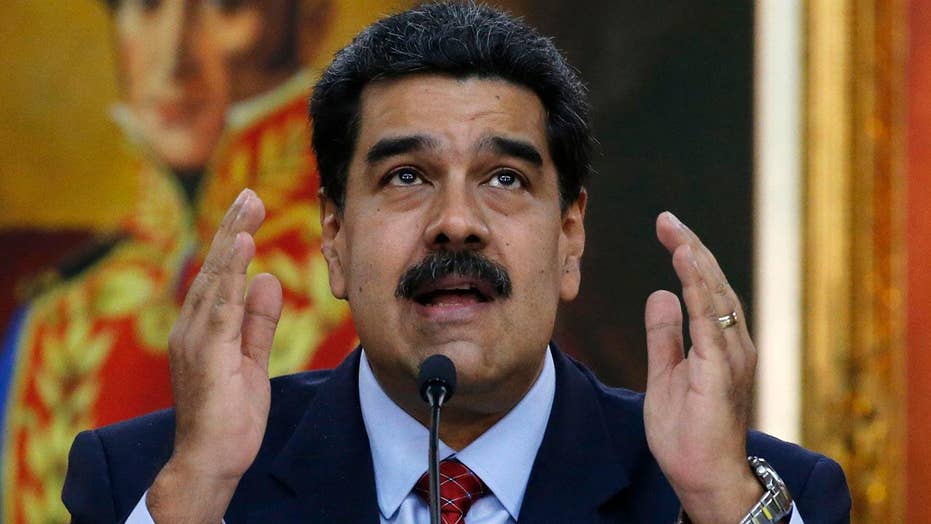 Venezuela's disputed President Nicolas Maduro once again blamed the United States for the political and economic meltdown in Venezuela, saying the Trump administration was a “gang of extremists.”

In a new interview from Caracas, the embattled socialist leader reiterated his plan to prevent humanitarian aid to enter his South American nation – aid planned by the opposition that is supported in great part by the U.S.

He said allowing aid to enter Venezuela is a way for the U.S. to justify a military intervention.

“They are warmongering in order take over Venezuela,” said Maduro, who has repeatedly denied his economically devastated country is facing a humanitarian crisis, despite multiple reports coming out of Venezuela of people suffering from lack of basic necessities.

He told the BBC his country has “the capacity to satisfy all the needs of its people” and that it did not have to “beg from anyone.”

"This is part of that charade,” Maduro said. “That's why, with all dignity, we tell them we don't want their crumbs, their toxic food, their left-overs." 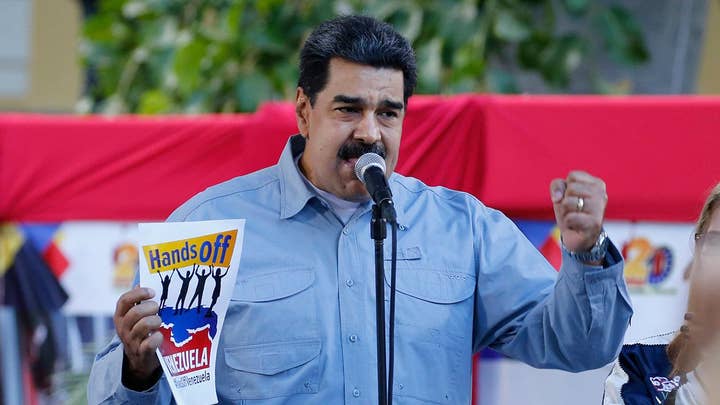 Despite having the world's largest oil reserves, Venezuela is suffering soaring levels of malnutrition, disease and violence after 20 years of socialist rule launched by the late President Hugo Chavez. Critics accuse Maduro, a former bus driver and Chavez's hand-picked successor, of unfairly winning an election last year for a second six-year term by banning his popular rivals from running and jailing others.

The U.S. humanitarian aid is being stored in a warehouse across a river from the socialist rally, a situation that also puts Maduro in a tight situation, said Eric Farnsworth of the Council of the Americas and Americas Society, a Washington-based think tank.

"If you let it in, you're bowing to [Juan] Guaido and the international community," he said. "If you don't you're seen as a tyrant."

Maduro’s military last week set up a blockade on a key border crossing with Colombia in an attempt to block humanitarian aid from entering the country.

Opposition leader Guaido, who claims to have assumed presidential power as head of the opposition-led National Assembly last month, has worked to push aid through Venezuela’s borders in an attempt to further pressure Maduro’s regime and restore democracy in the country. The 35-year-old lawmaker has received overwhelming backing from roughly 40 countries led by the United States. 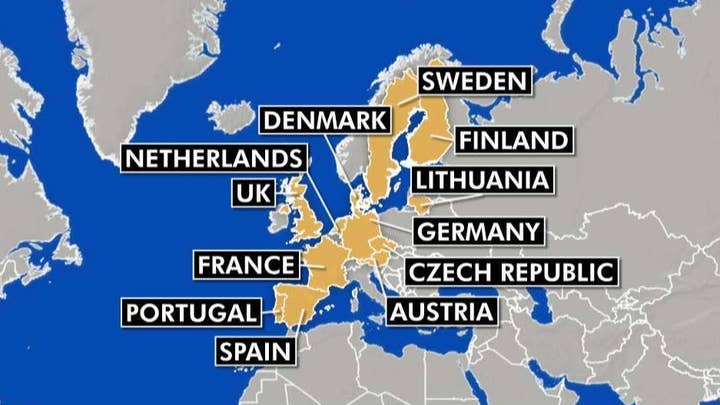 Meanwhile, Maduro has remained steadfast that he will not be stepping down from power and has accused the U.S. of seeking to colonize Venezuela and exploit its vast oil reserves.

He said he hopes “this extremist group in the White House is defeated by powerful worldwide public opinion.”

"It's a political war, of the United States empire, of the interests of the extreme right that today is governing, of the Ku Klux Klan, that rules the White House, to take over Venezuela,” Maduro added.

Maduro has made a show of overseeing military operations played on state TV almost daily. He's jogged with troops in formation, mounted an amphibious tank and railed against what he says is an impending U.S. invasion that he has likened to a Latin American Vietnam.

President Donald Trump has said all options are on the table regarding Maduro's ouster, but Farnsworth called any U.S. military deployment highly unlikely as such a move would make the U.S. responsible for supplying food long term and rebuilding the gutted country.

U.S. sanctions imposed on the state oil company PDVSA in late January and meant to pressure Maduro from office have yet to bite. In the capital, Caracas, residents pulling up to gas stations can still fill up their cars, despite fears that sanctions would create shortages.