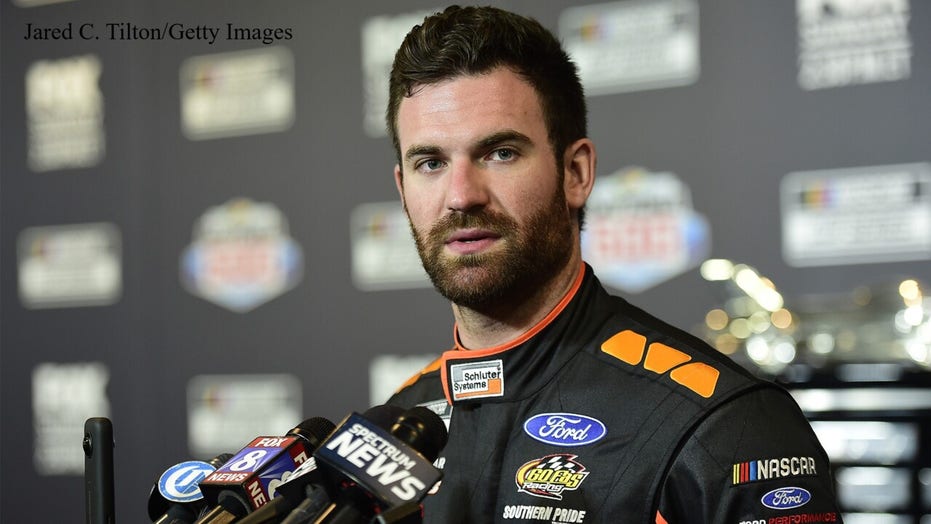 Racer Corey LaJoie explains why he’s starring on MotorTrend’s docuseries “NASCAR All In: Battle for Daytona.”

Corey LaJoie is taking on his biggest challenge yet — reality TV.

The 28-year-old driver is starring in a docuseries on MotorTrend titled “NASCAR All In: Battle for Daytona,” which gives both fans and curious viewers a behind-the-scenes look at the highs and lows of drivers and their families. The show, which concludes on March 9, features LaJoie, as well as Austin Dillon and Tyler Reddick.

LaJoie recently sparked headlines when Ryan Newman’s No. 6 Ford flipped in the air at the Daytona 500, colliding with LaJoie’s No. 32 Ford Mustang. The 42-year-old Newman slid across the finish line in a crumpled heap of metal with sparks flying as his car skidded to a halt with oil pouring onto the track frighteningly close to open flames. Less than 42 hours after the crash, Newman was released from Halifax Medical Center.

NASCAR DRIVER KYLE BUSCH'S WIFE, SAMANTHA, OPENS UP ABOUT IVF AND LIFE ON THE ROAD

LaJoie spoke to Fox News about why he’s opening up in front of cameras, his relationship with Newman today, as well as how faith has continued to play a role in his career.

Fox News: How has faith played a role in your career?
Corey LaJoie: Obviously, there's a level of danger in our sport that not a lot of occupations have. So I want to make sure I'm in good shape if something does happen. I've been raised in a Christian household, but that relationship with the man upstairs has kind of changed and morphed over time as I've read the word more and got to know God's heart.

It's been a lot of fun to grow and see my wife grow in that area as well. We got baptized last year in New Smyrna Beach. Luckily, we didn't get bit by any sharks down there, but our life's been firing on all cylinders, excuse the pun, the last year and a half or so and it's been a good season of life.

Fox News: Looking back, what compelled you to let cameras in and follow your life story?
LaJoie: That's a good question. When people present a reality show, it kind of makes some people, and myself, a little bit reserved because I'm not the "reality show" type.

But I also looked at it with being with a company like MotorTrend and how their demographic is car people just like myself. It allowed me to get my story and how people can relate to me because I'm not that much different than their demographic. I'm not any different than the fans that are watching me on a Sunday. I just happened to be the one that's on the racetrack.

So when they asked, I thought about it for a little while, but it wasn't a hard decision to pull the trigger and jump into this show and let them really pull the curtain back of my life and my wife's life, to let them in and get some good stuff, and see how the life of a race car driver is maybe not as quite glamorous as it looks to be on TV.

Fox News: What was one challenge you faced while opening yourself up to cameras?
LaJoie: It's a little bit awkward when you have three strangers, essentially, in your house. You've got a camera guy, a producer, and a sound guy when you're normally just sitting on the couch watching Netflix with the dog.

That was a little bit different to let those guys in and just have, not necessarily scripted conversations, but provoke conversations that we wouldn't normally have about certain topics that we normally don't talk about. But in the end, the product and all the content that they got and put into the show was worth it. It shows how relatable I and my wife are. We are just a normal couple. We live in a townhouse, drive normal cars. I just happen to do a pretty cool job.

Fox News: How has your friendship with Ryan Newman changed since his recent crash?
LaJoie: I've texted with him a little bit. Our relationship probably has just been surface level, but we've been friends since we've been racing together, just because I think everybody has a level of respect for everybody competing because they know the danger involved.

But over the last couple weeks, just going to look at the cars and being in conversation with Ryan, obviously, we've got to know each other probably a little bit more. We also probably appreciate our friendship a little bit more just because of how different that outcome could have possibly been. If the Lord's hand wasn't involved in it, the outcome could've been much different. I'm excited to get Ryan back to the track and be competing with him soon.

Fox News: You are a third-generation driver. Were you ever worried about being compared to your father or grandfather?
LaJoie: Yeah, for sure. In the beginning part of my career, I was successful. I was winning races against guys like Chase Elliott and Kyle Larson and the guys who are having a lot of success right now. I was beating those guys and they'd beat me sometimes as well, but we were running wheel to wheel quite often. They got hooked up with great National Series teams and their careers took a little bit different of a turn than mine did just because I didn't have those opportunities for whatever reasons. It just didn't pan out that way.

But I wouldn't change my pathway by no means just because I've had to learn some of the intangibles, whether it be relating to fans or sponsors that I probably wouldn't have had to learn if I was jumping into a fast race car right from the start. But I've learned a lot of things at the back end of the sport and gaining a lot of experience on the track as well as off. So one day when I do get a race-winning car, I can continue to get a LaJoie in the NASCAR victory lane.

Fox News: What will you say has been the biggest sacrifice you had to make for a profession like this one?
LaJoie: Friendships sacrifice a lot just because you don't have the time to really engage. Some of my best friends are in the sport, but there's also a level of competition that makes having an intimate friendship tough.

Joey Logano and I are really good friends and I was at his wedding, but there's always that little bit of competition that always kind of forces its way in between us. But if you can separate on-track stuff versus off-track stuff, it really is a great platform to be a good role model to fans or to the community.

Fox News: You and your wife are expecting a baby. Congrats!
LaJoie: Yes, she's 33 weeks so that sucker's kicking and wanting to come out.

Fox News: What's one thing about fatherhood that you're looking forward to exploring?
LaJoie: I think just being a good example and trying to teach it how to navigate life. Because there are countless things that my dad has taught me growing up in the sport, as well as just normal life, that I can pass down to my kids.

But there are also ways I feel like I can change or maybe do a little bit better with the presentation because my dad's not one for nice words. He always expected the best and me to just know how to do it from the start. But that's also some of the reasons why I was able to make it as far as I have in this sport because I had somebody who's done it before me, to kind of keep pushing me.

All episodes of “NASCAR ALL IN: Battle for Daytona” are available on the MotorTrend app. Fox News’ David Montanaro contributed to this report.