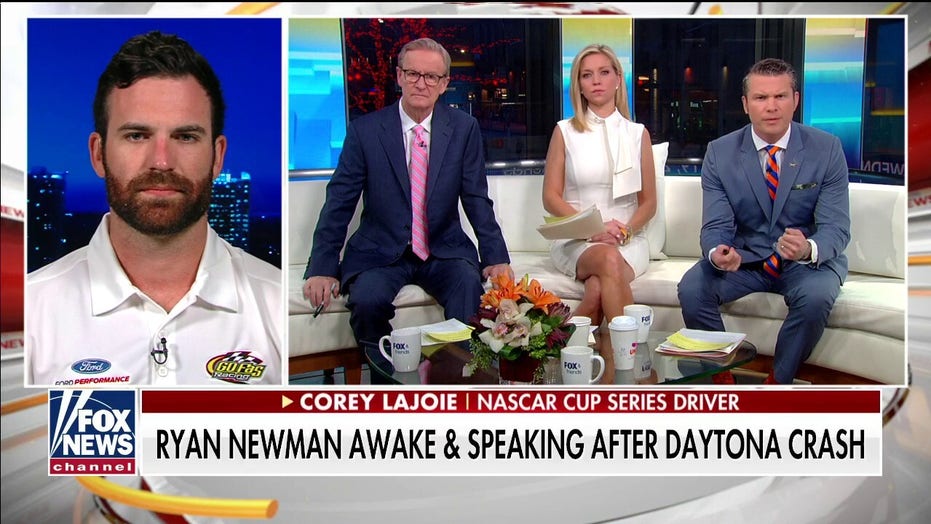 Newman's No. 6 Ford flipped in the air, colliding with Lajoie's No. 32 Ford Mustang. The 42-year-old Newman slid across the finish line in a crumpled heap of metal, sparks flying as his car skidded to a halt with fuel pouring onto the track frighteningly close to open flames.

"Unfortunately that was a worst-case scenario for Ryan and myself, because I took a big lick, too. I'm really sore but not as sore as Ryan and I was very lucky to come out of there unscathed," said Lajoie, explaining that as the crash unfolded, he couldn't see much more than a wall of smoke in front of him.

"Next thing I know, the smoke cleared for a split-second and I had a car sitting on my lap, more or less. I didn't know where I hit him. I didn't know who I hit. I came to a halt and got out because my car was on fire. And the wind was knocked out of me. And I was trying to collect my thoughts and just figure out what happened," he said, noting that Newman's car was in a "compromised position" when Lajoie slammed into him at 200 mph.

Safety crews rushed to Newman’s and worked to get the “Rocketman” out of his seat. The car was on fire as it skidded to a stop and had to be turned onto its tires before he could be unstrapped.

Viewers and fans held their breath as track workers placed large black screens around his car and worked to get him out. It took two long hours before NASCAR announced Newman had non-life threatening injuries and was in serious condition at nearby Halifax Medical Center.

Tuesday afternoon, it was announced via Twitter that Newman was awake and speaking to his doctors and family.

"I think everybody in the NASCAR community would agree that Ryan is probably the toughest guy in the garage. So there is no question he is going to make a full recovery and be back soon," said Lajoie.

He also credited the "safety advances" made by NASCAR over the years for saving Newman's life and credited the "power of prayer" by so many fans for helping him pull through.

"It takes one moment like that to really put in perspective how dangerous our jobs are. I think the fans sometimes take that for granted, too. When we strap in each and every week, we put our lives on the line," he added.