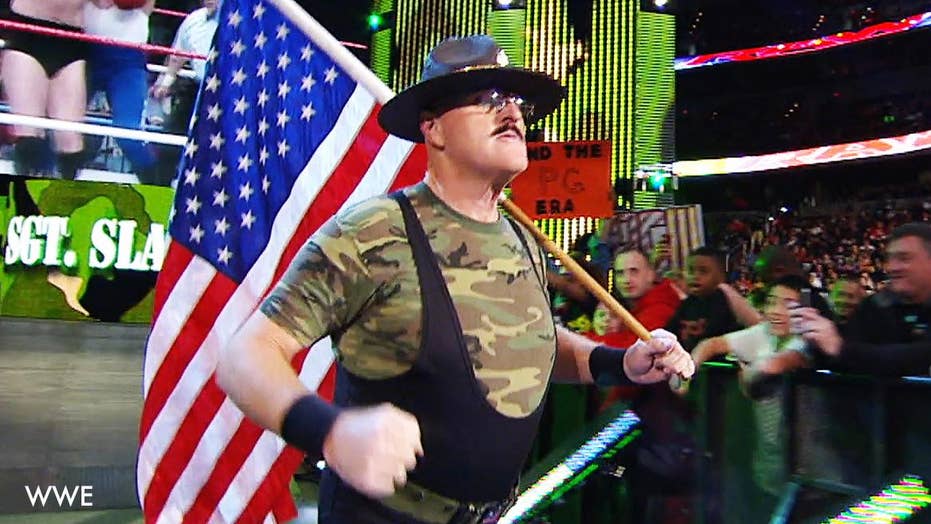 WWE superstar Sgt. Slaughter opens up about receiving anti-American death threats, being the first living G.I. JOE, and how the WWE Network has revitalized his career.

How did you join the military and how did that lead into a career in pro wrestling?
I was actually born in Beaufort, S.C. My father was in the Marine Corps at Parris Island and we lived in a farm back in Minnesota. When he was out of the Corps we moved back there. When it was time for me to get out of high school, [my parents] really couldn't afford to send me to college, so my father suggested maybe I want to join the Corps, join the military service and maybe do college later. So I thought, "Well, that's probably what I'll do, so I'll go into the Marine Corps and I'll go to college when I get out." I got halfway there, ended up at a pro wrestling training camp on leave, and I got into a little scuffle with the British Empire champion Billy Robertson — and I knew that's what I wanted to do.

Was it an easy transition for you from being a Marine to becoming a pro wrestler?
Well, it helped me a lot going through the training to be a professional wrestler because it’s not for everybody. Not everybody can make it through. You can be in the greatest physical shape of your life. But when you go through the calisthenics and everything that goes along with it to see if you really want it, you have to really dig down deep, and if you love it you stay with it. So I have to say that that helped me a lot along with my high school training — football, basketball, wrestling, track, baseball.

CHYNA, D-GENERATION X TO BE INDUCTED INTO WWE HALL OF FAME

When you became immortalized in 'G.I. Joe,' did you ever think it would be as big as it became?
"Well, I knew of 'G.I. Joe,' but by the time I went into it I wasn't really watching it. And when I was asked to be the first living 'G.I Joe' character in its 30-year history at that time, that meant a lot — the first living 'G.I. Joe!' Not an animated [character] — it took a real person to put them in the animation. So at the time it was a pretty big honor, but I didn't realize I was going to be as big as it is today. Whenever I go do autograph sessions and meet people around the country at hospitals or veterans’ hospitals, children's hospitals and different charity events I do, it's a pretty big thing when they give you the 'Yo, Joe!'"

WWE STAR PAIGE ON 'FIGHTING WITH MY FAMILY'

Not only are you a former WWE heavyweight champion, but you also headlined a WrestleMania. What goes through one's mind right before walking out to such an enormous event?

Being the main event at a WrestleMania is a pretty big deal in itself, but I was under the character of being an Iraqi sympathizer, so nobody really liked Sgt. Slaughter too much. We had Donald Trump there with his girlfriend at the time, Marla Maples, and Regis Philbin, Alex Trebek, Willie Nelson — and I knew them all personally and none of them would talk to me, so that was a little bit hard at the beginning. I was kind of all by myself all day long, and finally when it was time to go out to the ring and you hear the crowd and you hear the roar when you go through the curtain into the arena, you know you're in a pretty big deal and not everybody's cheering for you. I don't think too many were cheering for me. So it was a real big deal.

Tell us about the time WWE received death threats for your portrayal of an Iraqi sympathizer.
When I first started in the WWE, I was the villain because I was a drill instructor and everybody that's ever been in a military boot camp hates their drill instructor, so I didn't have to work too hard on getting people to dislike me [or] boo me. But when I worked as an Iraqi sympathizer, [it] was a whole different battle, because we talked about the United States of America, and they were in a confrontation with Saddam Hussein and that's all real life. So we have to kind of tiptoe around a few things, but overall Vince McMahon gave me full range of what I wanted to do, and so I did a lot of things that I don't regret — but were tongue-in-cheek, singing 'Happy Birthday' with a birthday cake in the ring to Saddam Hussein and [having] people stand up and give 30 seconds of silence to all the brave Iraqi soldiers who have lost their lives in the overtake of Kuwait — that didn't go over so well.

After I won the title from the Ultimate Warrior in Miami at the Royal Rumble, everything really broke loose pretty hard and heavy and hot. By the time I got to Philadelphia, Vince McMahon had called and said that somebody called him and threatened to kill me and my family and kill his family and him and blow up our houses and blow up the wrestling office, and the studios and our cars. So he took it pretty [seriously]. And so he sent a four-man security crew over to my home, walk the perimeter of my property 24/7, with weapons, and wherever I went from that point on I had to watch where I was going. I never traveled with other talent, other superstars. I would never walk through a terminal and [would] always be driven to an airplane, and I go up the stairs into the airplane and I would leave down the stairs escorted to a hotel or to the arena. And we started getting a lot more bomb threats and death threats, and the FBI asked me to wear a bulletproof vest at one time, which I did, in the ring. It was a pretty serious situation. And we handled it as best we could, and when lives were being lost from the war we backed out of it and we went to ask for my country back. And people accepted me back and here we are today.

BECKY LYNCH WAS ALMOST A 'VIKINGS' STAR BEFORE JOINING WWE

WWE’s Hall of Fame ceremony has become a staple to WrestleMania weekend. What is it like to attend as a fan and a Hall of Famer as yourself?
Being inducted into the Hall of Fame is the number one thing that you're shooting for. You don't win titles, you earn titles, and to earn the right to be a Hall of Famer and voted in by your peers — I was unanimously voted in. I was still wrestling, actually, and it was a great honor. I knew what it was like for me to think of what I wanted to say, who I wanted to thank. And as anything, there's time limits. Wrestlers can talk the chrome off a bumper, so you have to try to get it all into one 10-minute conversation — your whole career, your whole life and who to thank. So it's a pretty big deal and I really enjoyed it. This year it’s going to be at the Barclays Center, and I look forward to it because it's my favorite time of the week when I hear the stories and hear who they thank and how they got there.

Another unique part of WrestleMania weekend is WrestleManka Axxess, being able to meet your favorite superstars. What is it like for you to be able to meet your fans of yesterday and today? What can the fans expect?
Axxess is a time where you can really interact with the superstars of today and the legends of today and yesterday. There's so much going on, there's memorabilia. [There are] photo-ops, autograph signings, live matches going on. There's so much to do and that all takes place at Pier 12 in Brooklyn [N.Y.] this year. It's just incredible every year what they come up with. I know some years they've had our outfits that we wore in a ring. It's always a surprise, because you never know what was going to show and what's going to happen. When I do autograph sessions I hear parents say to their kids, "That was my hero when I was your age. That was my hero growing up." And to hear that word, "hero," that they point out to you that you're their hero. That means a lot. You have to know that people really look up to you and respect you and they want to be like you... It's just a lot of fun.

What are your thoughts on the WWE Network, where kids today get to watch all of your old matches — and where you can possibly rejuvenate your career in the eyes of younger fans?
It was a stroke of genius. To be able to go back and watch Sgt. Slaughter against Iron Sheik or Pat Patterson in an alley fight back in the early 80s and see matches that they had never seen before. Hardcore matches as the alley fight [were] before hardcore was hardcore.

I’m a member of the network and I watch a lot of my matches, and some I don't even remember. You know, you're so busy sometimes —  I've wrestled 14 times in one week. So you don't always remember those matches but boy, it brings back a lot of memories, and there's so much you can do with a network you know, not only watch us legends and the superstars of today but you can get the pay-per-views on the network. What better could wrestling fans have it than to have the network.