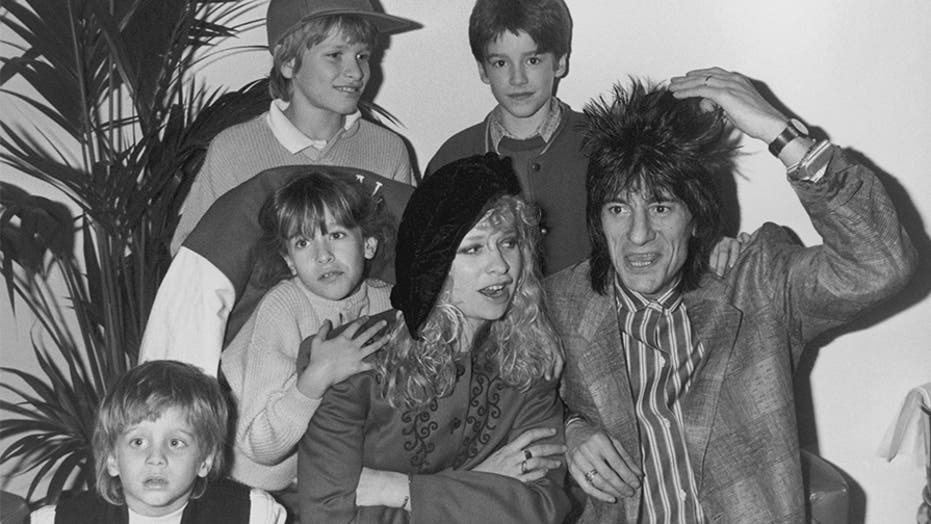 Jamie Wood claims that growing up as the son of a Rolling Stone nearly killed him.

The 45-year-old son of rocker Ronnie Wood and model Jo Wood told U.K.’s DailyMail on Wednesday that he was exposed to drugs before he battled his own addictions.

“Mom and dad used to party a lot and you could always smell cannabis in the house,” he continued. “It would waft up the stairs and when I was 9 or 10, I’d run downstairs and find ashtrays full of joints and help myself, then stash them behind the microphones.”

The outlet explains that Wood’s biological father, Peter Greene, is Jo’s first husband, but he was brought up as Ronnie’s own since he was a toddler.

PLAYBOY BUNNY, FUTURE DOCTOR DANIELLE LUPO DIDN’T USE HER FULL NAME TO PREVENT PATIENTS FROM LOOKING HER UP

Despite his unconventional childhood, Wood insisted that Ronnie, now 73, changed his life around a decade ago when he gave up partying and “got clean.”

Today, Ronnie is keeping busy being a hands-on father to twin girls, 4, with his wife Sally Humphreys, 42.

“I’m sure he will do a better job this time around!” said Wood. “I’m really happy for Ronnie. Sally is an awesome mom and the twins are great.”

Life is different for Wood, too. According to the outlet, he developed a drug habit at age 14 and used both heroin and cocaine until age 20. He also smoked cannabis until recently.

JO WOOD: ROLLING STONES' RONNIE WOOD AND I WERE 'PIONEERS OF CRACK'

In October 2017, Wood was rushed to the hospital for emergency surgery following a heart attack at age 42.

“It was shocking,” Wood admitted. “I was in the ambulance, taking selfies. I felt fine. Then, when we got to Bart’s Hospital in London, there were 10 people waiting for me saying, ‘Sign this for if we have to do a bypass.’ I said, ‘I can’t have an operation without my wife here.’ But they said, ‘There’s no time.’”

Wood underwent life-saving surgery which involved inserting two stents into his heart. He also had to completely change his lifestyle, including giving up a 20 cigarettes-a-day habit.

Wood said the heart attack came out of nowhere.

“I’d started boxing and weight-training trying to get fitter,” he explained. “And one day I lifted a load of weights. I was doing great, and I went upstairs to get ready for work and it was like a dull ache in my lungs. I was worried I had lung cancer.”

Ronnie himself had been diagnosed with lung cancer. After an operation to remove part of his lung, the English rocker is now cancer-free.

Ronnie Wood and Jamie Wood attend the launch party of Ronnie Woods Scream Gallery in Mayfair on May 20, 2006, in London, England. (Getty)

Wood said the heart attack wasn’t his only wake-up call.

“[My family] was crying on the bed,” he recalled. “It wasn’t nice. Then the doctor came in and said I had to make some life changes and give up smoking. I’d always been a heavy smoker. But there’s nothing like four kids crying to shock you into being a good boy.”

When reflecting on his childhood, Wood shared that he fell in with the wrong crowd.

“The problem was, I went to 17 different schools in three or four different countries,” he said. “Whenever I had friends, they suddenly got taken away… I took heroin and cocaine. I was bad. I was partying hard.”

The outlet shared Wood’s first job was that of a roadie for rock producer Harvey Goldsmith. He went on to work in tours for Guns N’ Roses and Nirvana. After that, Wood took on a promotions assistant job with the Rolling Stones and then managed his father’s art business.

“Did partying contribute? I certainly damaged myself?” he admitted. “What do you expect? I grew up in that environment. I thought it was natural for me to take drugs. Mom and dad always knew about the drugs but were pretty aware that I was going to make my own decisions.

“I remember being 16 years old when we went on this holiday to Antigua. At this point, I was doing drugs every day. I was sitting in my room and I get this knock on my door and it’s dad, who’s come to chat with me about drugs. He said, ‘Do what you gotta do and have fun doing what you do, but don’t let the drugs control your life. You control the drugs!’”

Wood claimed Keith Richards was also aware of “how hard I liked to party.”

“He pulled me aside one day and said, ‘Jamie, there’s a difference between itching your a—and tearing it to pieces.’ I definitely had a few accidental slight overdoses as a kid. Although having plaque build-up in my artery and it causing a heart attack was probably more due to consistent smoking.”

Wood said that when Ronnie cleaned up his own act around four or five years ago he “liked to preach.” It didn’t sit well with him.

“I got upset with him,” he said. “The biggest drug-taker in the world was telling me what to do. I didn’t take too kindly to it. I did recently apologize and tell him he was probably right and that I was in denial about the cannabis, but I thought he could have handled it better.”

The outlet noted that after Wood’s heart attack, he launched his own CBD company named Woodies, last November. Jo welcomed the venture, but Ronnie was less enthusiastic.

Jamie and Jo Wood attend the private view of 'Needleworks' by Sophie Delaporte, at the Scream Gallery on September 11, 2008, in London, England. (Photo by Dave M. Benett/Getty Images)

“I texted dad not so long ago and sent some products but he’s not impressed,” he said. “For the first time in my life, this doesn’t involve him. I haven’t asked him for money or to put his name to it. That is liberating for me. Maybe if I hadn’t had a heart attack, I wouldn’t have found my true niche. I made every product myself. Every cream and every oil, from extraction to the final product.”

“Maybe I was a bit greedy before – I wanted nice things, Ferraris and stuff,” Wood shared. “Then the heart attack happened and I don’t want any of it. Money’s not the be-all and end-all. I just want my business and family.”