Rolling Stones ready to hit the road on US tour

Legendary rockers set to return to the stage on the American leg of their 'No Filter' tour after it was delayed due to frontman Mick Jagger's health issues.

If there’s anyone who could strut around on stage 11 weeks after heart surgery at the age of 75, it’s Mick Jagger.

The rocker confirmed his status as the world’s fittest great-grandad by fronting the Rolling Stones’ comeback in Chicago on Friday.

The U.S. leg of the band’s "No Filter" tour had been delayed due to Sir Mick’s heart surgery.

But now it is back on. It kicked off at the city’s 61,500-seater Soldier Field stadium, and after the Stones frontman defied medical expectations with a quick recovery even his bandmates have labeled him “superhuman”.

Speaking in Chicago in the band’s only U.K. interview since Mick’s surgery, guitarist Ronnie Wood, 72, said: “The doctors said they’ve never operated on an athlete at 75 before — we had a really good laugh about that.

“He’s just so fit, he sets aside three hours a day to do exercise and that’s done him plenty of favors in later life. He’s superhuman really.

“Usually if this type of operation is done on a 75-year-old not in retirement they go back behind a desk. They’ve never had a case where the guy hasn’t had a desk job.

In fact, Ronnie reckons the legendary frontman is fitter than ever.

Ronnie Wood, Mick Jagger and Keith Richards of the Rolling Stones perform as they resume their "No Filter Tour" North American Tour at the Soldier Field on June 21, 2019 in Chicago. The tour had been postponed while Jagger recovered from heart surgery. (Getty)

It was three weeks before the Stones’ North American run was due to start that Mick called bandmates Ronnie, Keith Richards, 75, and Charlie Watts, 78 —  into his Miami hotel room. Visibly upset, he told them he needed an urgent operation to fix a problem with his heart and was not fit to perform.

Despite the nightmare of rescheduling 17 gigs, there was never any question about it. They just wanted Mick to get better. Music could take a back seat.

Ronnie said: “Mick had the knowledge from his doctors that some day he’d have to take care of this problem with his heart — but he had no idea it would come up this quickly.

This U.S. leg was meant to start in Miami on April 20, and the Stones are back on stage earlier than expected, thanks to Mick’s recovery.

I met Ronnie in a suite at Chicago’s Peninsula Hotel. The rocker, who has been sober for ten years, arrived clutching a can of Diet Coke.

The dad of six, whose kids range in age from two to 42, was dressed casually in a black hoodie over a patterned shirt, skinny jeans and trainers.

He told me his 2-year-old twins Gracie and Alice had joined him on the trip and were off to see Cirque du Soleil with their mum, Ronnie’s third wife Sally, 41, that afternoon. 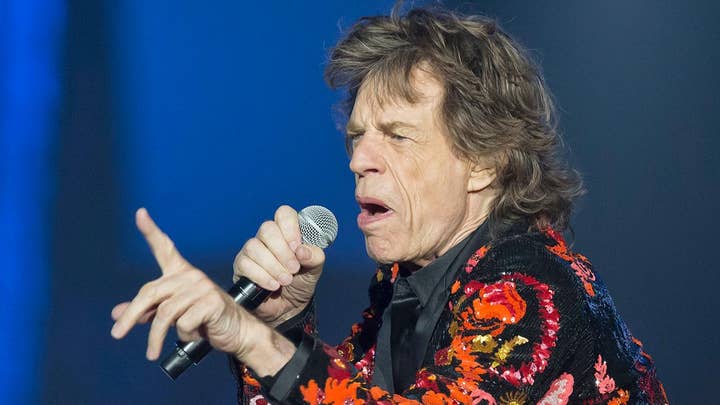 They also took the toddlers to Keith and his wife Patti Hansen’s retreat in Turks and Caicos, in the Bahamas.

Ronnie said: “When Mick was having his op, Keith said you may as well come to his little place in the sun.

“So we took the twins down there and that’s where they were potty-trained. Keith was over the moon. He said, ‘They came as little babies and left as little girls.'”

If being an older dad causes him any stress it’s not evident. His thatch of hair has barely any grey.

Mick, who has eight children by five different women, also has a two-year-old — son Deveraux, with ballerina Melanie Hamrick, 32.

Ronnie believes they are both living proof that men can cope with being older dads.

He said: “Mick’s got his little Dev, he looks forward to seeing him. My little ones, I can’t get enough of them. If you have space in your life where you have the freedom to have them and look after them then, yeah, I’d recommend it. It’s like having a second chance.

“Since my sobriety, it’s like having a second chance at life, seeing everything with clarity, gratitude. It’s unbelievable. I feel so good. And to have these little blessings is the icing on the cake.”

These days the Stones’ pre- and post-gig routines are a world away from the hell-raising excesses of the Sixties and Seventies.

Ronnie told me they will have something light to eat on the day of a gig — Mick and Charlie like fish and veg while he and Keith prefer shepherd’s pie.

Afterwards, to wind down, they will have soup and go back to their respective hotel suites. Ronnie, who has battled drink and drugs, usually ends up watching crime documentaries on Netflix. And that is just how he likes it. 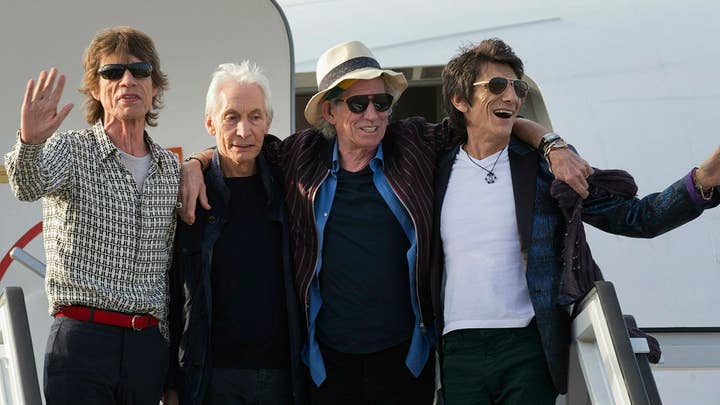 He said: “With the momentum of youth, you were always chasing a high. The music was high anyway and you want to get higher and higher, so you have a drink, or whatever. You never used to think about it — it was like keeping the high going.

“But now I can sit back and go, ‘My body is going to collapse if I keep piling it on and do it like you used to’. I’m still very happy. I don’t think I’m missing out on anything, I’m just seeing it a bit more sensibly now. I’m high enough and I’m grateful of that.”

Their 17-date US tour runs until the end of August. Then the band will go their separate ways before finding a window to work on their next album of original tracks.

Ronnie says the band don’t keep in regular contact when not on tour or in the studio. I asked whether there was a Rolling Stones WhatsApp group and he replied, laughing: “No. Ha! I know you’re having me on now.

“We’re terrible at communicating. Charlie and Keith, they still refuse to go online, they don’t carry phones with them.

“Mick and I stay in touch a bit. I can get Charlie on the landline and Keith through his wife, if we have to talk, but the thing is we’re so close on the road, we need a little space and we know everyone is fine. The band are more communicative when Ronnie asks for feedback on his impressive paintings.

During Mick’s recovery, he revealed his Stones-themed take on Picasso’s 1925 painting The Three Dancers, one of five he has created, where Mick appears to be depicted as a woman.

He plans on releasing more art. In fact, there is no chance of him slowing down, given that he is a natural “fidget.”

The same goes for the other Stones. Although their career has spanned six decades, no one is about to call it quits. Mick bouncing back from his surgery has only highlighted their resilience. Ronnie and Charlie have both battled cancer and Keith has recovered from a serious head injury.

Ronnie said: “Somebody up there likes us. We just carry on and thank our lucky stars. Luckily, it hasn’t left any scars that have stopped us progressing. It’s the best it’s ever been with the Stones.

“It’s like a medicine. We don’t like to stop working. All being well, there’ll be a new album and a new tour.

“It will be great — but let’s get this one over with first.”