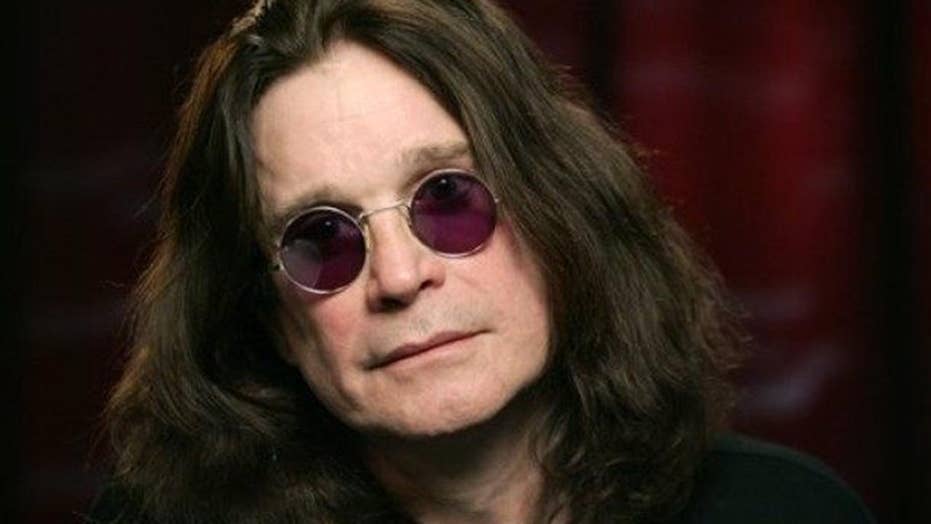 Hollywood Nation: 70-year-old rocker Ozzy Osbourne postpones all of his 2019 tour dates; industry insiders project the upcoming 'Avengers: Endgame' will gross between $250 and $300 million in its debut weekend.

He is the rock god who has had countless near-death experiences from wild behavior, drug overdoses and a horrific quad bike crash.

But it was a trip in his own home that made Ozzy Osbourne think he was facing his last moments on Earth.

The Prince of Darkness and self-confessed “Comeback Kid” spent two months in the hospital and needed three operations.

The fall had dislodged metal rods in his body, put there after the 2003 quad bike ordeal.

OZZY OSBOURNE OUT OF ICU, RECOVERING FROM FLU COMPLICATIONS

In an exclusive interview with The Sun, the ex-Black Sabbath singer opens up for the first time about the fall in January that left him with 15 screws in his spine — but also got him “off his a**e” and making music again.

The recovering drug addict chats about using cannabis oil to help with chronic insomnia, how Elton John helped him through his pain and how a brief affair with hairdresser Michelle Pugh in 2016 has been forgiven by TV star Sharon, his wife of 37 years.

Talking in his Hollywood home about the aftermath of the fall, Ozzy, 70, reveals: “Sharon was saying, ‘You’ve got to get out of bed’. I would say, ‘What’s the point, I’m dying’. There were many times I thought, ‘I’m done.’ I was scared. I thought that was it.”

He had got up to go to the bathroom, fell over a rug and bashed his head. He went face down and his neck was forced back.

Before the fall, Ozzy had been hit with bronchitis and pneumonia as a result of flu complications. 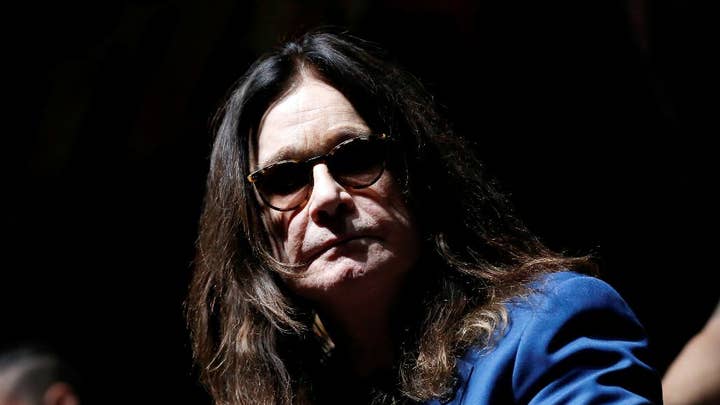 And this was after surgery on his right hand last October because he had contracted a potentially deadly staph infection that affects skin.

Ozzy says: “I had a great run until I turned 70 in December, then all hell broke loose.”

He shows me deep scars cut into the top of his back, the result of the surgery, and adds: “I’ve got about 15 screws in my spine now. Let me show you the X-rays. ‘Sharon, get my phone please’.”

“It was the nerve pain that was excruciating and left me numb. You should have seen me a month ago.

OZZY OSBOURNE POSTPONES ALL 2019 SHOWS TO RECOVER FROM HEALTH SCARES 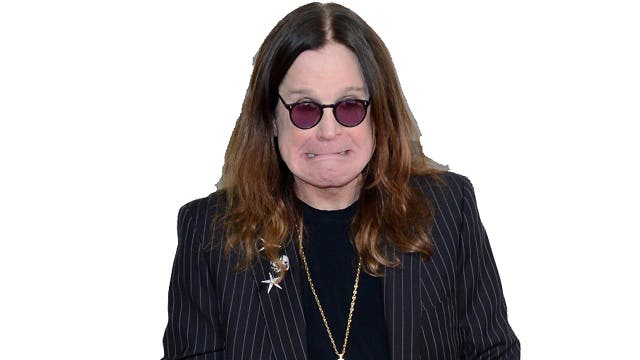 “I was sitting in a rigid pose for three months. I had to have nurses 24/7. I am walking better now but I’m not 100 percent on my feet. It has been unbelievable.”

Ozzy has been recuperating and fighting to get fit for his solo tour, which was rescheduled for next February after his accident.

Sharon and her dog Elvis welcome me into the home and show me to the mansion’s basement cinema, where Ozzy’s Black Sabbath and solo platinum discs and awards adorn the staircase walls.

As he shuffles to take his seat, Ozzy says: “I got up in the night and went to the bathroom but it was pitch black, so I went down with a slam!

“I thought I was paralyzed. I didn’t freak out, I just lay there knowing it was really bad. Sharon came down and I told her to phone for an ambulance. I went straight in and had an MRI.

“I then didn’t leave for months. I needed surgery to cut through the nerves.”

Coming out of surgery, Ozzy describes the pain as “excruciating”. He says: “I usually bounce back but I felt so dreadful. I lay there not getting better for three months. I thought I was paralyzed. I said, ‘Sharon you’ve got to tell me the bloody truth. Is this permanent now? Am I paralyzed?’

“I knew it was something serious and thought, ‘What the f—k have they done to me?’ I was on painkillers and messed up. It has been the worst experience of my life.

“I was in absolute shock. I was convinced that Sharon knew something I didn’t. I thought I was dying. I have never felt so bad in my life. It was f—king agony.”

Ozzy had cheated death before. In 2003 he stopped breathing and his heart stopped beating following the quad bike accident at his estate in Bucks.

And of his drink and drug-taking past, he says: “I overdosed on drugs many times so I am lucky to be here anyway. I’ve had so many brushes with death that I’m the Comeback Kid. If I was a cat I’d have 33 lives.”

In classic Ozzy speak, he says: “I didn’t think I would last the rest of my life.” The dad of six adds: “When I was 25, I thought, ‘I ain’t going to live past 40’, and then I got to 40 and thought maybe it’s worth sticking around a bit longer.

“But this year there’s been everything thrown at me. I found out I’ve got blood clots so I am on blood thinners. I even had all my teeth removed.

“The way I am going I will be just a head on a stick.”

Recovery has been slow for Ozzy and there is still some way to go. But what has changed in recent weeks is his self-belief and drive.

He says: “I want to get back on stage and I’ve started making music again. Recovering has been a long process. I’ve got to have physical therapy and I’m training.

“This morning I did half an hour on my exercise machine. I’ve always been a very athletic person and I judge my success by how long I can go on my elliptical machine. I couldn’t do five minutes when I was first home but now I’m up to half an hour with ease.”

Ozzy, who has been clean for years, started taking CBD oil made from cannabis to help him sleep.

He says: “I don’t get loaded with it, so it’s fine. I’m a chronic insomniac. Before, I was sleeping one hour a day. I was nuts. CBD oil really works to help sleeping.

"It’s not something processed that you inject it into your arm which makes you see f—king Martians everywhere. It’s not like that — and believe me, I’ve seen a few Martians in my day.”

Ozzy credits Sharon, his family and close friends such as Elton John for supporting him.

He says: “Elton told me to get off the couch and start walking, which was what I needed, as I couldn’t move off it for months.

“He was right. Elton is a sweetheart. He has phoned me throughout all this. He was at the house the other day with his two boys. They are great kids. They are such a good family. You would be surprised, when you are feeling miserable you find out who is a friend and who doesn’t give a s—t.

“Tony has called daily to ask how I’m feeling. That means so much when you can’t f—king move. I’ve not heard a thing from Geezer Butler or Bill Ward [original Black Sabbath members] though, which is OK because you don’t have to call. But if it was any of them I’d be on the phone all the time.”

Ozzy believes making music again has helped save his life. He says: “I’ve made a new album and it’s helped get me back on track.

“I was just lying in my own self-pity for months. It’s the greatest album I’ve done.”

The record came after he was asked to appear on a track by rapper Post Malone. 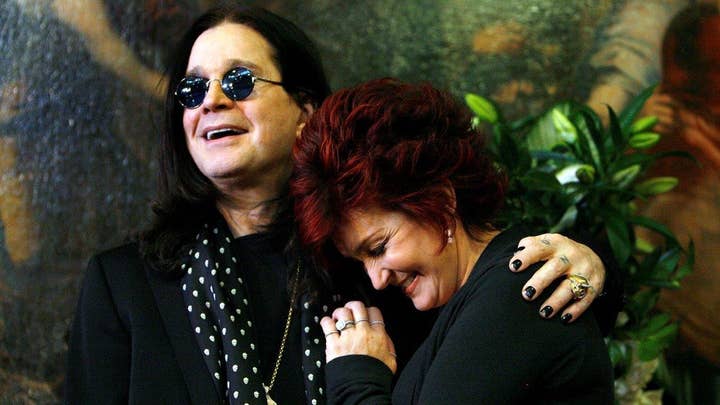 He adds: “I’d never even heard of this kid. He wanted me to sing on his song 'Take What You Want,' so I did and then one thing led to another. I started recording a new album with Post Malone’s producer Andrew Watt. It’s only nine tracks but it was a catalyst to get me to where I am today.”

As Ozzy plays me "Ordinary Man," a song from his new record, he says: “If it wasn’t for making this record I would still be on traction, thinking, ‘I’m going to be lying here forever’. I’ve missed music so badly. My fans are so loyal and so good. Up until making the album I thought I was dying. But that got me off my a—.”

But making studio album No 12 has reminded Ozzy he is not getting any younger.

He says: “This is my first recording in a studio for ten years, so I do feel a bit out of touch.

“Music goes straight online these days and that’s quicker than it takes me to write a text. It’s all about downloads and streaming now. What the f—k does that mean? What’s Spotify? I thought it was a skin problem where you woke up spotified.

“The album was all finished in four weeks. I said to Sharon that I didn’t feel like I’d made an album because we haven’t ended up screaming at each other.”

Ozzy admits he is getting on better than ever with Sharon following his six-month affair.

OZZY OSBOURNE'S EX-MISTRESS: 'HE GAVE ME THE GREATEST LOVE OF MY LIFE'

With a smile he says: “Sharon and I have never been as close as we are now. It’s great. Sharon has been a god.

“We all make mistakes. I’m lucky she took me back. Sometimes I sit there and go, ‘What the f—k was I thinking?’ I won’t understand why it happened until the day I die.”

After getting through the trauma of the past few months, Ozzy says he wants to make the most of his time left and hopes his solo tour will be the best yet.

He says: “I’m no spring chicken. The knocks you suffer stay with you. I’m hoping to be fully better for the tour. I’m still scared of falling as I’m a bit unsteady on my feet and getting my balance back.

“If my balance is OK, I will be fine. But I’m not retiring. I’m going to keep making music until I drop dead.”