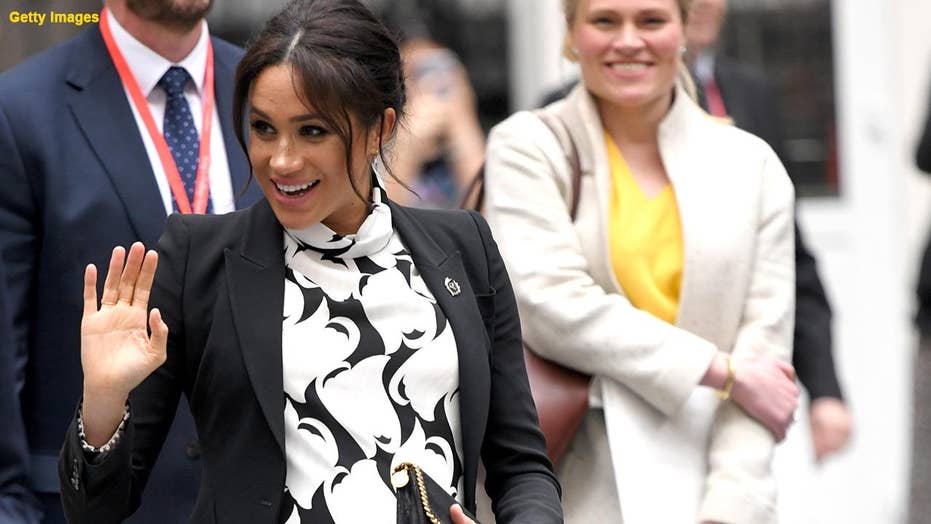 “Baby showers, it’s very much an American thing,” Dickie Arbiter recently told Us Weekly. “We don’t do it here in the U.K. It was a bit over the top in terms of expense and the way she got there.”

Arbiter, who previously served as media manager for Prince Charles and the late Princess Diana, is currently a sought-after expert on the British royal family.

Britain's Prince Harry and Meghan, the Duchess of Sussex, are greeted by Princess Lalla Meryem of Morocco second left and Princess Lalla Hasna of Morocco, at the residence of King Mohammed VI of Morocco, on the third day of their tour of Morocco, in Rabat, Monday, Feb. 25, 2019. (Yui Mok/Pool Photo via AP)

In February, Markle jetted to New York City for a high-profile baby shower at the Upper East Side hotel The Mark. The festivities were reportedly organized by Serena Williams, who booked out the penthouse suite and personally covered the cost of the $75G-a-night room bill.

Markle traveled on a private jet, which is estimated to cost over $100G. Vanity Fair previously noted the plane belongs to one of her close friends in Toronto, who covered the cost as a present for 37-year-old, who is expecting her first child with husband Prince Harry.

Arbiter said he was stunned to read reports that the Duchess of Sussex was allegedly having a second baby shower in the U.K.

“That’s something they have to answer,” he explained. “Meghan is American and she does things the American way.”

But not everyone agrees with Arbiter’s analysis.

Royal commentator Victoria Arbiter told Fox News that while baby showers are an American tradition, the British monarchy has no trouble with the former American actress celebrating overseas because she’s not breaking a royal rule.

“There’s absolutely no reason why Meghan shouldn’t have a baby shower,” she explained. “Showers are largely an American tradition and Harry, along with the rest of the royal family, would be more than happy for her to honor her own tradition and customs. Baby showers are not customary in the U.K. as friends and family usually give gifts once a baby has been born. It’s just a different way of doing things and not because of any perceived ‘rules.’ Meghan’s friends throwing her a shower is a generous gesture and no doubt the time with them in New York will have been much appreciated.”

British royal expert Katie Nicholl, who is the author of the forthcoming book “Harry and Meghan: Life, Loss and Love,” pointed out that while some critics were worried Markle spent taxpayer funds in the extravagant getaway, it was her actually friends who footed the bill. And while baby showers aren’t customary, Nicholl said Duchess of Cambridge Kate Middleton’s mother and sister previously threw a party when she was expecting.

“A lot has been made of how much the shower has cost, but this is not being paid for by the taxpayers, but by her friends, so I really don’t see why anyone should have a problem with it,” said Nicholl. “It is the case that a baby shower is more of an American phenomenon than a British one and I am told Meghan was very keen to have a shower and thrilled that her friends Serena Williams and Amal Clooney offered to host the party. They really pulled out all the stops and made it a fabulous celebration for Meghan.”

And when it comes to the royal family, royal expert Marlene Koenig said they wouldn’t want Markle to give up her American traditions or close circle of friends, despite her title. And when it comes to allegedly flaunting her wealth, she said Prince William and his wife Kate Middleton head to tropical island Mustique, “a private island for the very well-heeled,” nearly every winter for sunshine.

“[The British royal family] knows that Meghan had a life and career before marrying,” said Koenig. “She has adapted to royal duties quite well, but she has friends who live in the U.S. — friends who are well connected, well-educated and professional women.”

“I think personally, the queen and [Prince] Charles may be impressed with Meghan’s friends because most have achieved their successes on their own merits — as has Meghan,” she continued. “The only negatives and gripes will come from the British tabloid press. They thrive on negativity.”

MEGHAN MARKLE WAS A 'FAILURE' IN HOLLYWOOD, ROYAL BIOGRAPHER CLAIMS

If there’s only one downside to the baby shower, they pointed out, is how high profile it was. Markle, along with her celebrity guests, were frequently photographed out and about in New York City as part of the celebration. Ingrid Seward, editor-in-chief of Majesty Magazine, said Markle could have benefitted from a more top-secret affair to avoid ruthless paparazzi and backlash from the press.

“Baby showers are now regular events here in the U.K. as they are in the U.S.,” explained Seward. “Not everyone has them but almost. Certainly, the Duchess of Cambridge had one, but it was very private, and we had no idea who attended. I am pretty sure [Princess] Diana didn’t have one, as they were not so fashionable then, but I think Fergie did and the Countess of Wessex. They are, of course, an American invention, which has crept over here in the last 20-30 years. They are not considered in any way vulgar for members of the royal family to enjoy, just a nice way for friends to be able to say congratulations.

“It is a little unfortunate it was so high profile and she was seen flying in and out on a private jet. But it would have been privately funded and nothing to do with the British taxpayer, so I see no reason for her not to have fun and enjoy it all, which she obviously did.”

“Meghan’s [baby shower] has been unusual in how public it has been,” added Nicholl. “It has felt quite celebrity with all the paparazzi and high-profile names in attendance.”

Markle is reportedly due in April. The couple’s child will be seventh in line to the British throne.