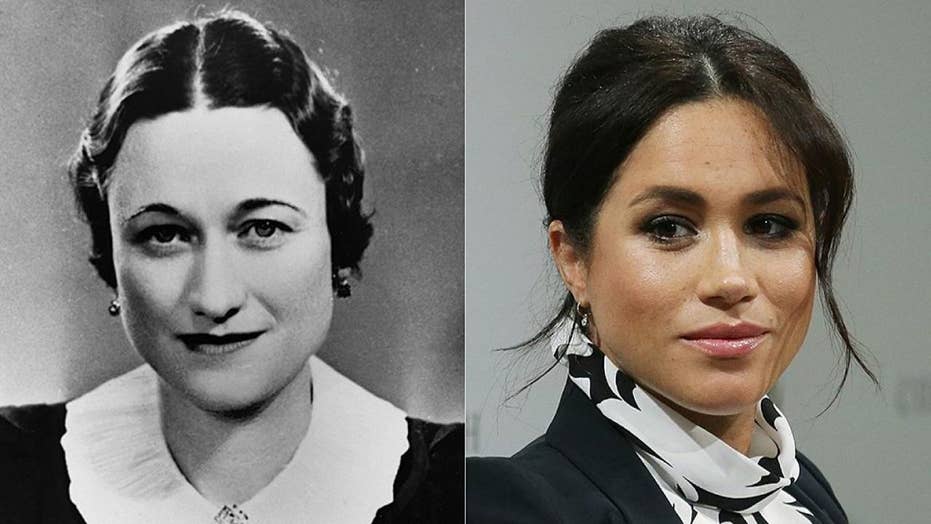 British author Anna Pasternak has recently released 'The Real Wallis Simpson,' which aims to debunk rumors that have long plagued the Duchess of Windsor.

When Meghan Markle became the Duchess of Sussex in May of last year, the world was reminded of another American divorcee before her who rocked the British monarchy — more than 80 years ago, Wallis Simpson's love affair with the Prince of Wales caused a constitutional crisis that led to King Edward VIII's abdication.

British author Anna Pasternak has recently released “The Real Wallis Simpson,” which aims to debunk rumors that have long plagued the Duchess of Windsor even after her death in 1986 at age 89.

Pasternak told Fox News she embarked on researching Simpson’s controversial life after Netflix’s “The Crown” got it all wrong. She also tracked down Simpson’s last remaining circle of intimate friends who were determined to set the record straight.

“I was watching ‘The Crown’ and I realized the portrayal of Wallis Simpson was actually incorrect,” said Pasternak. “I thought she would be the perfect person to rehabilitate and looked in a fresh light. In ‘The Crown,’ they take the common view that Wallis was this ambitious schemer who was a very tough woman and stole a beloved king from his throne. But it was vastly incorrect.”

For decades, the twice-divorced socialite was accused of entrapping Edward in a seductive web as part of her plan to become queen. Edward famously gave up his throne and declared he could not rule his country without the woman he loved by his side. Consequently, the couple was banished from England and they spent their days in exile.

In reality, Pasternak claims in her book Edward was a womanizer who feared commitment before he met Simpson in 1930.

“He did have affairs, namely, with married women,” said Pasternak. “So there was no chance of ever having to commit to them."

However, when Edward met the Baltimore native through her friend Thelma Furness, who was involved with the royal at the time, he ultimately became captivated by her. Simpson herself previously said in her memoir that she believed it was her Americanness and independence that drew him in.

“As I discovered through my research, she had a variety of qualities that really appealed to him,” explained Pasternak. “She wasn’t fawning towards him in the way that others were. She was also maternal and he had a very cold upbringing. They developed this understanding of each other. But he literally realized that he couldn’t continue without her. She was elemental to his being. And that degree of passion, I still find staggering.”

At the time, Simpson was still married to her second husband Ernest Simpson, who was born in New York City to British parents. According to Pasternak, Simpson attempted to end her affair with Edward, who grew increasingly obsessed with her. He allegedly blackmailed his mistress and threatened to commit suicide if she left him.

“She did not want to marry him,” claimed Pasternak. “She was content with her second husband. And although she embarked on an affair with the Prince of Wales, she always assumed that in the end, he would go on to marry an eligible, suitable bride. No one could have been more shocked than her when he announced that he wanted to marry her and that he was going to do so no matter what. And I think the public perception is that she, in some way, encouraged this.”

“People do not understand that she really tried to stop this, she tried to get away from him,” continued Pasternak. “But [Edward] put so much pressure on her…. He threatened suicide if she left him. He threatened that no matter where she went in the world, he would follow her. He was almost deranged when it came to his obsession or need with her.”

Edward’s father, King George V, passed away in 1936 at age 70, making Edward king. But there was no way he could be with the woman he loved without causing a constitutional crisis. His choice was to either abdicate or call it quits with Simpson. He chose to give up the throne that same year. According to Pasternak, the British government attempted to persuade Edward to keep Simpson as a mistress while he continued his role as king. He refused. Instead, the crown was passed on to his brother, George VI, the father of future Queen Elizabeth II, Harry’s grandmother.

“He loved Wallis so much and wanted to honor her,” said Pasternak. “He thought she was worthy of that status. He was determined to have her as his bride. … He didn’t see the damage that he would do to Wallis until it was too late.”

Pasternak said the same day Edward gave his abdication speech from Windsor Castle, Simpson fled and found herself sobbing at a friend’s house in the South of France. Pasternak also alleged Simpson attempted to stall her divorce from her second husband, but Edward “put so much pressure on her.”

The marriage of the Duke of Windsor and Wallis Simpson, June 3, 1937. ((Photo by Universal History Archive/Getty Images)

“He really was behind this divorce going through,” she said. “Once the divorce went through, it was incredibly difficult for Wallis to turn the king down… She felt quite fragile emotionally.”

She also had to endure the backlash of the press and public, which slammed her for sabotaging the monarchy. Pasternak insisted that over the years, Simpson was mistreated by history.

“She was the recipient of the most horrendous attacks through letters,” said Pasternak. “She was seen as hard and calculating. It really was character assassination… [Yet], she never spoke out. She had this incredible dignity. She had to contain all of this against a backlash that Meghan Markle knows today. For example, when it comes to Meghan, people write horrible comments about her online. In the case of Wallis, she received literal hate mail and death threats. She would receive these letters in a breakfast tray. She would say, ‘My world fell to pieces every morning on my breakfast tray.'"

Simpson and Ernest divorced in 1937. That same year, she married Edward. Pasternak claimed she felt entrapped in marriage, but was determined to do her best by Edward, whom she grew to love. Still, Edward’s family banish him and his new bride from England.

“It never occurred to Edward or Wallis that if he abdicated from the throne, he would never be allowed to live in England again,” said Pasternak. “But due to his popularity among the people, Elizabeth, the Queen Mother (wife of King George), said it couldn’t happen. There wasn’t room for two kings in England. She feared he would overshadow his less popular, less charismatic brother.”

One of the misconceptions Pasternak wanted to address is that Simpson was reportedly a Nazi sympathizer. She did go with Edward to Germany to meet Adolf Hitler in 1937, but allegedly for different reasons. Simpson herself insisted she wasn’t pro-Nazi. Still, the royal family greatly disapproved of this trip.

“The top historians all say there is no evidence whatsoever, any factual evidence, that Wallis was a Nazi sympathizer,” said Pasternak. “What I discovered was the whole reason that Edward took Wallis to Germany and meet Hitler was that he was so aggrieved over his wife being shunned by the royal family, he wanted her to experience a royal tour. So when he was invited to Germany, he wanted Wallis to be addressed as ‘your royal highness’ and be curtsied to. It was an ill-conceived trip.”

“However, we see those photographs today, knowing what Hitler went on to do,” continued Pasternak. “In 1937… [Hitler] hadn’t committed the atrocities that we are so appalled by today. Most of the aristocrats of the day were intrigued by what was going on in Germany at the time…. [At the time] Edward was incredibly hurt to be exiled from his own land.”

Simpson’s last remaining pals also insisted she was not pro-Nazi. Instead, they described her as incredibly loyal to those she loved and devoted to her husband throughout her life.

Edward died in 1972 at age 77. The couple had no children and Simpson remained single for her final years.

Simpson is buried next to her husband, onetime King Edward VIII, near Frogmore Cottage, the residence of Markle and Harry, in the Royal Burial Ground.

The Duchess of Windsor (1896 - 1986) watches the start of the Trooping the Colour ceremony from a first-floor window of Buckingham Palace, June 3, 1972. A one minute silence was observed for the Duke of Windsor, who had died in Paris the week before. (Photo by Wesley/Keystone/Hulton Archive/Getty Images)

“I don’t think she would have allowed the idea of entertaining regret,” said Pasternak. “I think the real tragedy is that she made him incredibly happy and the world still didn’t come to love her…. I don’t think she had regrets. She took the situation and made the best out of it. She had come to love him very much. Once she became the Duchess of Windsor, she knew there was no room for regret.”