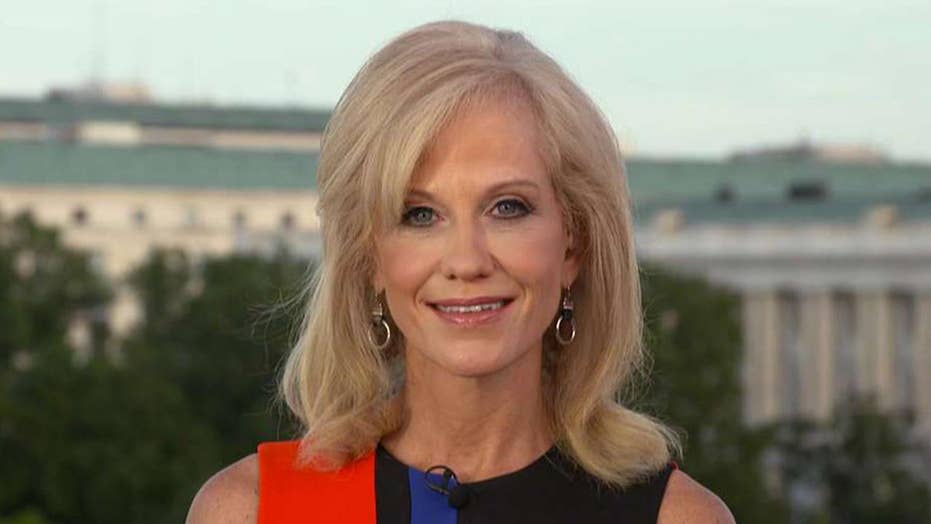 Conway: The president doesn't mind waiting for a better trade deal for America

Counselor to the president Kellyanne Conway weighs in on the escalating trade war between the U.S. with China.

Kellyanne Conway responded to Taylor Swift’s support of the Equality Act at the VMA Video Music Awards and in her latest song, “You Need to Calm Down.”

The counselor to the president, who sat down with Fox News’ Martha MacCallum on Tuesday, noted that she’s a fan of Swift's new track but took a jab at the singer for her political activism and even questioned whether her fans even understand what the Equality Act is.

She went on to note that Swift’s previous support of Marsha Blackburn's Democratic rival in the Tennessee Senate race didn’t go her way.

“I think when Hollywood and singers and all go political, it sounds in the moment like it’s very popular, and you’ve seen so many times where it backfires and it blows up,” she explained. “But she’s also somebody who went up against President Trump head-to-head in the United States Senate race in Tennessee and lost handily. Marsha Blackburn is our United States senator now.”

Kellyanne Conway slammed Taylor Swift over her support of the Equality Act at the 2019 VMAs. (Getty Images)

When pressed on why the Trump administration isn’t moving forward with the Equality Act, Conway said there are factors standing in the way and complicating things.

“The president and the White House support equality,” Conway claimed, “We don’t support pieces of legislation that have poison pills in it that can harm other people. Look at this economy — it’s equally open to everyone. People have job mobility, the deregulation, what he’s trying to do, peace and prosperity around the world — that’s to benefit everyone. But when something is named something, it’s not always truly that.”

A rep for Swift did not immediately return Fox News' request for comment.

Conway’s statements echo a statement provided to Fox News by the White House in response to Swift’s VMAs speech.

DESPITE TAYLOR SWIFT STARPOWER, 2019 VMA RATINGS WERE LOWEST EVER

"The Trump Administration absolutely opposes discrimination of any kind and supports the equal treatment of all; however, the House-passed bill in its current form is filled with poison pills that threaten to undermine parental and conscience rights,” the statement read.

The pop superstar opened the awards show on Monday night at the Prudential Center in Newark, N.J., with a performance of her new song, "Lover." Swift was flanked by colorful dancers, then brought it back to her roots by bringing out her guitar to sing the title track of her new album "Lover."

The words "Equality Act" were shown over the 29-year-old pop star's performance, a reference to her support of the Equality Act legislation that would prevent discrimination based on sexual orientation and gender identity.

After winning the top prize, Video of the Year, Swift and a number of cast members from the video appeared onstage to accept the honor.

“Regardless of who we are, regardless of how we identify, at the end of this video there was a petition -- and there still is a petition for the Equality Act, which basically just says we all deserve equal rights under the law,” she said during her acceptance speech. She was referring to a Change.org petition she launched in June and which had garnered more than 500,000 signatures by Tuesday.

"And, I want to thank everyone who signed that petition because it now has half-a-million signatures, which is five times the amount that it would need to warrant a response from the White House," added Swift while accepting the award. She then looked down at her wrist and tapped on it, seemingly referencing a watch.

However, the White House is only required to respond to petitions filed on its petition website if a petition reaches 100,000 signatures within 30 days.

The video for "You Need to Calm Down," which also won the video for good honor, finishes with the words: "Let's show our pride by demanding that, on a national level, our laws truly treat all of our citizens equally." Before the video's release, Swift announced that she supported the Equality Act.