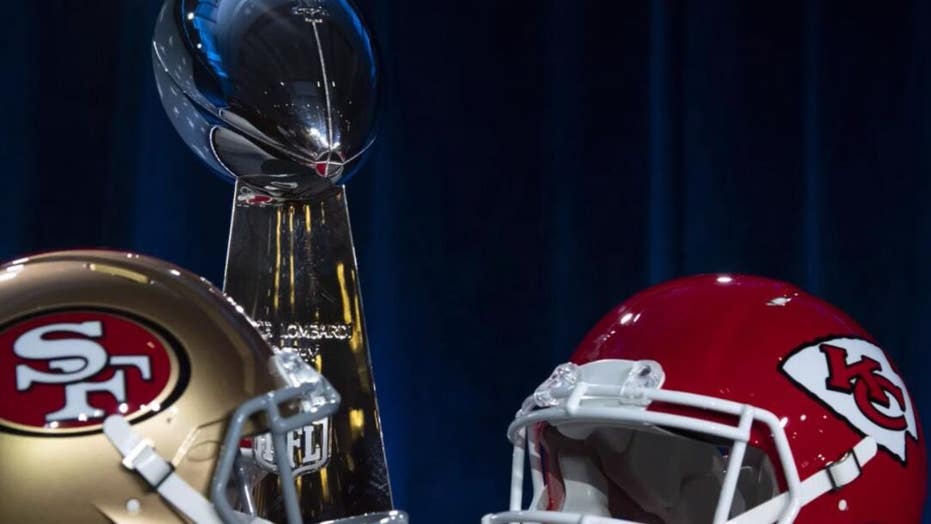 Some Fox News personalities are looking forward to Super Bowl LIV between the San Francisco 49ers and Kansas City Chiefs like it's their birthday, while others are more interested in the food than the football.

Regardless of their interest level, every FNC personality we talked to had an opinion – or at least tried hard to pretend they did – on who they want to win Sunday's big game.

Bill Hemmer, Chris Wallace, Sandra Smith and Jesse Watters are among the Fox News stars with a rooting interest in Super Bowl LIV.

“Fox News Sunday” anchor Chris Wallace will be in Miami to cheer on the Chiefs in person.

This weekend Chris Wallace will anchor “Fox News Sunday” from Miami, allowing him to stick around and cheer on the Chiefs from inside Hard Rock Stadium.

“I am all in on the Kansas City Chiefs, I think Patrick Mahomes is the most exciting player in football. And I love the way they came back on both the Texans and Titans,” Wallace said. “What’s more I have just written a book, out in June, on Harry Truman and the atom bomb. So I am feeling a strong connection to Missouri these days.”

The “Bill Hemmer Reports” host has vivid memories of the 49ers breaking his heart in Super Bowls back in 1982 and 1989.

“The 49ers and Joe Montana are responsible for two of the worst days of my childhood when they beat my Cincinnati Bengals in two Super Bowls,” Hemmer said. “I’m going with Kansas City. I think their coach, Andy Reid, makes the difference. I am hoping for a good game – I think we are set up to get a very good game – and I believe the league has its best matchup.”

Hemmer will be in Miami, anchoring “Bill Hemmer Reports” from the site of the big game.

“Over the years, I’ve attended countless Super Bowls and it is one of the best days of the year. The NFL has mastered the event. There is something happening at every moment for nearly eight hours,” Hemmer said. “Sensory overload. It is rare to find 50,000 people happy all at the same time and for the same reason. It doesn’t end that way, but that’s the feeling at kickoff.”

‘BILL HEMMER REPORTS’ GOES WHERE THE NEWS IS BEING MADE: ‘IT GIVES YOU PERSPECTIVE’

“The Five” co-host and “Watters’ World” namesake Jesse Watters will attend the game in Miami if traffic permits.

“I don’t really care who wins, but I’ll take the Chiefs. I’m from Philly and wouldn’t mind seeing Andy Reid get a ring,” Watters said. “[I] will be at the game in Miami. But if traffic is bad I’ll bail and watch it from a bar.”

“America’s Newsroom” co-host Sandra Smith will tune in from Iowa as she prepares to cover the caucuses.

“I'll be watching from Iowa ahead of co-hosting ‘America’s Newsroom’ from there Monday morning,” Smith said.

“Outnumbered” co-host and “Outnumbered Overtime” anchor Harris Faulkner is a longtime Chiefs fan, dating back to her time as a news anchor at the local Fox station in Kansas City. She's traveling to Miami to see her favorite team try to clinch the Super Bowl in person and is well aware their last appearance was back in 1970.

“50 years is a long time...even if it took a number of years, and we were thirsty at the corner of the drinking fountain for years and years, I feel like I’m about to get my thirst relieved," Faulkner said, noting that she doesn't plan on wearing a Chiefs jersey to the game.

“I want to be a little dressed up because you play like you practice,” she said. “I am practicing to be the supporter of a victorious team. You want to out dress your opponent and I’m ready for the moment”

"I’m rooting for the Kansas City Chiefs,” Llenas said. “It’s time for Mahomes to become the next generation’s Brady! I’ll be working at Fox till 6 p.m. and then running home to watch the game. No Super Bowl party this year.”

“Outnumbered” co-host Melissa Francis is excited to see the 49ers back in the title game.

“I grew up in California with Joe Montana and Steve Young as my QBs,” Francis said. “I thought two minutes was plenty of time to score twice!”

“Kansas City! They haven’t won since 1970 and when I’m on a story there I always try to hit Jack Stack, Arthur Bryant’s or Joe’s KC for my favorite barbecue,” Shawn said.  “I’m anchoring Sunday on the Fox News Channel and will then watch the game at home.”

“Fox & Friends” co-host Steve Doocy is a longtime Chiefs fan and hopes someone drops by the curvy couch with some burnt ends.

"I grew up in Kansas, the Chiefs have always been my team. When I was in college I worked Monday Night Football as a production assistant when the Chiefs played. One of my first TV jobs was working in Kansas City. So the Chiefs are who I’m rooting for,” Doocy said. “Aside from the Chiefs winning, I’m hoping Kansas City imports some of their famous BBQ. That would just make it perfect!”

Pete Hegseth will watch the game from Iowa as he prepares to cover the caucuses.

"Pulling for Kansas City, all the way. I want middle-America to beat Nancy Pelosi’s team! Plus, my dad has been a long time Chiefs fan, so I’ve always had a soft spot for them,” Hegseth said. “I’ll be in Des Moines Iowa watching the game from my hotel — because I’m covering the Iowa caucuses for ‘Fox & Friends.’”

"I’m rooting for the San Francisco 49ers. I am really fascinated to see if their defensive pass rush can shut down one of the best young quarterbacks in the NFL in Patrick Mahomes. The 49ers pass rush reminds me of when my beloved New York Football Giants beat the Patriots twice in the Super Bowl. So my friendly bet here is defense wins championships,” Emanuel said. “My family and I will be watching the game with dear friends. The tricky aspect is they are all Eagles fans. So my hope is we can stay focused on the big game, and it doesn’t break down into Giants vs. Eagles bickering.”

Reporter Carley Shimkus joked that she is rooting for Jennifer Lopez and Shakira to crush the halftime show and looking forward to the commercials and eating wings. The early riser also noted she is willing to sign all petitions to change the Super Bowl to Saturdays.

“But in all seriousness, I would love to see the Chiefs win. It would be really cool to see Andy Reid win for the first time especially with Patrick Mahomes‎ as QB. The veteran coach ‎winning alongside this exciting young phenom is a really cool narrative,” Shimkus said. “My couch and I have plans to watch it together because that alarm goes off very early on Monday!”

“America's News Headquarters” co-anchor Leland Vittert refuses to root for anyone other than his beloved New England Patriots.

“America's News Headquarters” co-anchor Leland Vittert isn’t a fan of either team but plans to watch the game anyway.

*The New England Patriots lost to the Tennessee Titans on Wild Card Weekend.

“I’m a full-blown, die-hard, bleeds green all day everyday Eagles fan. However, I am rooting for the Chiefs. Really, I’m rooting for Andy Reid," Mele said. "He used to coach the Eagles and he has yet to win a Super Bowl so I would like to see that happen for him! I’m gonna go Chiefs by three."

Correspondent Griff Jenkins is rooting against the man who hurt his fantasy football team.

Correspondent Griff Jenkins wants 49ers quarterback Jimmy Garoppolo to suffer after he put up a mediocre fantasy football performance this year, despite leading his team to the Super Bowl.

“Go Chiefs! Jimmy G was a nightmare for my fantasy team,” Garoppolo said. “Hoping the Chiefs not only crush the 49ers... I hope Mahomes actually sacks Garappolo in a never-before-seen scenario where the MVP QB plays linebacker as well! That would warm my heart -- which will be freezing in Iowa!”

Correspondent Peter Doocy is rooting for his father to be happy.

“Chiefs! My dad’s side of the family comes from Kansas, and my parents were married in K.C.’s Loose Park,” Doocy said. “Plan for the game is to get to a TV between final candidate events in Iowa.”