Bill Hemmer’s 12-year stint co-hosting the popular “America’s Newsroom” came to an end on Friday, but the veteran news anchor says he’s not worried about replicating its success in the afternoon with his new Fox News show, “Bill Hemmer Reports."

“I think the secret to succeeding there is, you've got to stay on top of the breaking news,” Hemmer said in his office overlooking Midtown Manhattan. “The audience expects that and you have to work hard to get newsmakers to bring you information that other shows are not getting.”

Hemmer will lead Fox News’ breaking news coverage and host “Bill Hemmer Reports” from its state-of-the-art facility, the Fox News Deck. But his straight-news show won’t be limited to the network’s New York headquarters. “Bill Hemmer Reports" is scheduled to broadcast its second episode from the Russell Senate Office Building in Washington D.C. starting Tuesday during the Trump impeachment proceedings

“We’ll be in Miami for the Super Bowl, Iowa for the caucuses, at the State of the Union… New Hampshire for the primary and on and on it goes,” Hemmer said. “We’ll be on the road.”

I will never forget the night I started, and that was on the eve of [Hurricane] Katrina. That is indelible.

The veteran newsman said reporting from the ground informs a story, which translates into a better experience for viewers. Hemmer has interviewed Attorney General William Barr in El Salvador, reported live from the U.S. summit with North Korea in Vietnam, and was on the ground for President Trump’s meeting with Russian President Vladimir Putin from Helsinki, Finland.

“I think it gives you perspective that you would never acquire, that would be challenging to acquire if you did not go out and see it for yourself,” he said. “This goes back a long way with me.”

SHANNON BREAM SIGNS NEW DEAL TO REMAIN AT FOX NEWS: ‘I AM ECSTATIC’

Hemmer’s passion for travel extends beyond his reporting duties, which he largely credits to a “midlife crisis” he had ... at age 26.

“I took a big chance, and that was to throw away a dream job and backpack around the world for a year,” Hemmer said. “I had $15,000 to my name, I was a sports reporter in my hometown of Cincinnati, Ohio, but I felt that if I did not do it before I turned 30 then the walls of my life were going to come caving in on me.”

Hemmer packed his bags and journeyed to China, Vietnam, Nepal, India, the Middle East, Eastern Europe and Russia, among other destinations. He got around with maps and books in the pre-smartphone era, engaging with locals across the globe and learning what truly matters.

“It gave me an essential piece of my resume that I could not have anticipated,” he said.

Hemmer still globe-trots during his free time, but he’s come a long way since his low-budget backpacking.

“I just went to Kenya for New Year’s. I’ve had the great fortune of so many incredible life experiences, either through my job or personally, and I had an absolute blast on that trip,” Hemmer said. “It was a great way to cleanse the palate of 2019 and get ready for what will undoubtedly be a big year for all of us as we start a new decade.”

It has been 20 years since Hemmer was dubbed the “Chad Lad” during his coverage of the 2000 presidential election recount in Florida, but he scoffed at the idea of dusting off the moniker for his new show.

“I can tell you, with good assurance, that’s not coming back,” he joked. 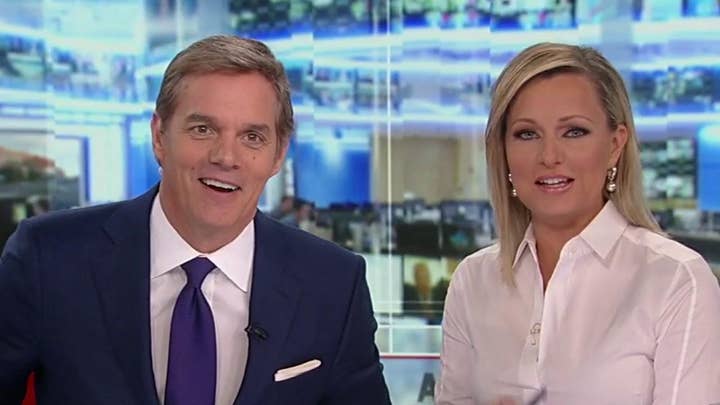 Hemmer will celebrate his 15-year anniversary at Fox News later this year. Three specific moments stand out as the most memorable, he said, with the most recent being President Trump’s surprise victory over Hillary Clinton in 2016. Another one was the night President Barack Obama won the Iowa causes in 2008 as he reported live from Des Moines.

“I remember hearing in my earpiece, Juan Williams in tears saying, ‘America needs to stop and think about this for a moment, an African-American won in Iowa,’” Hemmer said. “It was a moment that gave me goosebumps.”

But the story that, arguably, had the biggest impact on Hemmer’s career came when he first joined the network in August 2005 and he covered a devastating hurricane before he even knew his way around the Fox News building.

“I will never forget the night I started, and that was on the eve of Katrina,” he said. “That is indelible, we were standing on the edge of the pool, metaphorically, and they tossed me in.”