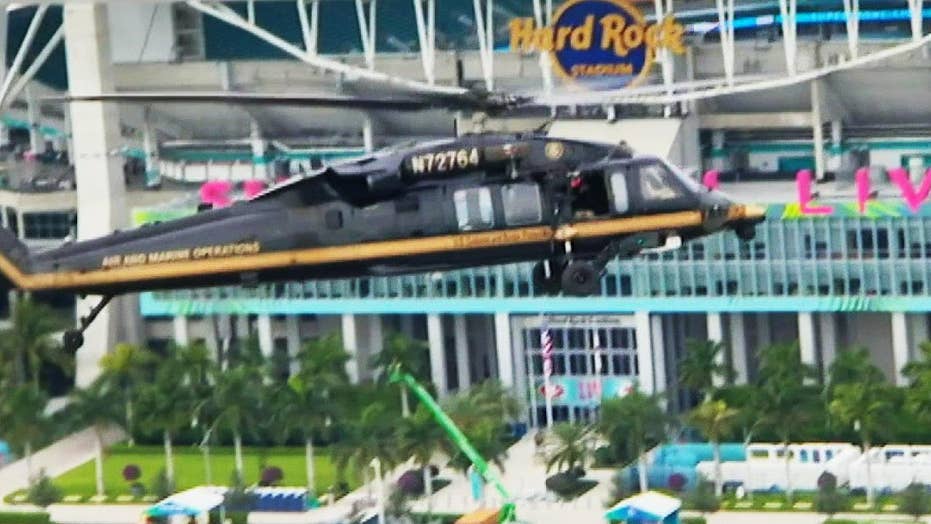 Super Bowl security intensifies in Miami ahead of big game

Miami has deployed nearly 1,500 officers on foot, horseback, in boats and the air to ensure the security of Super Bowl LIV.

“Outnumbered” co-host and “Outnumbered Overtime” anchor Harris Faulkner has a busy few days ahead of her, traveling to Miami to watch her beloved Kansas City Chiefs play in Super Bowl LIV before hustling back to New York City to cover Iowa caucuses the very next day.

Faulkner was a news anchor at the local Fox station in Kansas City, WDAF-TV, starting in 1992, one year before legendary quarterback Joe Montana joined the team. She was already a huge sports fan, but it didn’t take long to get swept up in the city’s love of the Chiefs.

“When you’re in Kansas City and it's game day, there is nothing going on but game day,” Faulkner said. “Having some of the games carried on the FOX station where I worked, and it was just part of the news coverage, if they had a Sunday game the days leading up to it, the whole week you’re talking Chiefs.”

“I wasn’t just somebody who was there for 15 minutes. I was there for eight years… it was such a big part of my career,” she added.

Faulkner said a seminal moment to falling in love with the team came in the early 90s when she was cutting a WDAF promo that featured Chiefs’ mascot K.C. Wolf. The team’s cherished mascot still brings her pleasure over 25 years later.

“When they were down 24-0 against the Texans and it looked pretty dire, and that they might not even be able to fight for the AFC Championship this year, K.C. Wolf was banging his head one something,” she said. ”He was upset they were down 24-0. [He’s] fun. I look for those fun moments.”

Many Fox News shows, including “FOX News Sunday” and “Fox & Friends,” are broadcasting from Miami to coincide with the game. Faulkner is heading down, too, but she's just going as a fan. In fact, the only platform that she’s committed to is her own Instagram feed, where she regularly posts about her Chiefs.

Chiefs fans are die-hard but haven’t had much payoff in the playoffs, as the team hasn’t been to a Super Bowl since 1970.

“Fifty years is a long time,” she said. “They’ve been bridesmaids but they haven’t been the bride.”

Faulkner recalled covering the 1994 AFC Championship game between the Chiefs and Buffalo Bills when Montana was knocked out of the game with an injury and Kansas City fell one game short of the Super Bowl.

“It was a really hard loss,” she said. “I really wanted them to do it when I was there. But I believe in precious timing and this is a really special point for me, in my career. Things have come full circle and I’m with Fox and Fox is carrying the Super Bowl and my Chiefs are in it.”

The “Outnumbered Overtime” anchor is optimistic that her trip to Miami won’t end with another disappointing loss.

“Even if it took a number of years, and we were thirsty at the corner of the drinking fountain for years and years, I feel like I’m about to get my thirst relieved.”

Faulkner is a passionate and educated fan, capable of breaking down the X’s and O’s that many casual football fans don’t grasp. She’s concerned about the 49ers dangerous running game, but feels star quarterback Patrick Mahomes will get the job done for the Chiefs if the defense can stop San Francisco’s ground attack.

“They contained the run against the Titans and Derrick Henry, he’s a superstar,” she said, referring to the Chiefs’ AFC title game victory.

Faulkner is also passionate about fashion, so fans shouldn’t expect her to wear a Mahomes jersey when she attends the game at Hard Rock Stadium. Chiefs’ legend Nick Lowery gifted Faulkner a gold chain that she plans to wear with a simple black dress to let her bling stand out.

“I want to be a little dressed up because you play like you practice,” she said. “I am practicing to be the supporter of a victorious team. You want to out-dress your opponent and I’m ready for the moment”