Following an allegation that former Vice President Joe Biden inappropriately touched and kissed a former candidate in Nevada during a 2014 campaign event, Whoopi Goldberg is coming to his defense.

During "The View" on Monday, the daytime talk show panel addressed the recent allegations Lucy Flores made against Biden, 76, with Goldberg saying that some would say the potential 2020 Democratic candidate is "overly familiar" with people he interacts with and explaining that he’s just “a hands-on kind of guy."

Co-host Meghan McCain then went on to discuss how Flores "does not claim this is a MeToo moment" and the rest of the panel, including Joy Behar, chimed in.

"... She felt annoyed or uncomfortable with it, so we have to accept that," Behar said. "But I don't think it rises to points we've been listening to about Harvey Weinstein and the rest of these people. It just doesn't look like that.

"We all know Joe Biden," she continued. "He's been here. I remember when I met him in Florida before he was Vice President, and he was so friendly. He's a close talker. He comes up right to your face... so he talks close. He touches. That's what he's like and I feel it would be really unfortunate if we got rid of everybody who's just an affectionate kind of person. Those are nice people too."

On Friday, Flores detailed the alleged encounter in a piece she wrote for New York Magazine’s The Cut. She claimed the incident happened at a campaign rally in early November 2014, when she was attempting to become the state’s lieutenant governor. Biden appeared at the event to help round up support for Democrats in Nevada, she wrote.

Flores was in line, waiting to go on stage at the rally when she claimed to have “felt two hands on my shoulders.” “Why is the vice-president of the United States touching me?” she recalled thinking.

Flores claimed Biden sniffed her hair and “proceeded to plant a big slow kiss on the back of my head.” The alleged incident left her motionless and triggered a variety of emotions, she said.

"The View's" Abby Huntsman wondered what Flores' motives were in making her allegations public.

"Is it simply to let people know that I was uncomfortable? Which you could have done in private. Or is it because maybe you want someone else to win and you want him to have doubts about actually announcing for presidency," questioned Huntsman, adding that she's been concerned about the MeToo movement and "getting to this place where you can’t have normal interactions with each other."

Huntsman's remark prompted co-host Sunny Hostin to jump in, praising Biden's response to the criticism he's faced, and adding that she doesn't know if "we will see any more smelling of hair and kisses on the forehead" from him.

“That pisses me off,” Goldberg said. “I don’t want Joe to stop doing that.”

McCain, who agreed with Goldberg, stated that there's just "a certain type of retail politician that loves people." 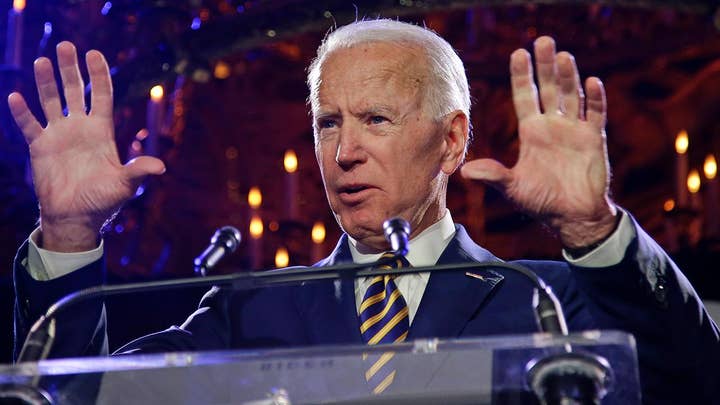 In a statement to Fox News on Saturday, Biden spokesman Bill Russo said the former vice president “was pleased to support” Flores’s 2014 campaign “and to speak on her behalf” at the rally.