A former Democratic candidate in Nevada has accused former Vice President Joe Biden of inappropriate conduct during a 2014 campaign event.

Lucy Flores detailed the encounter in a piece she wrote for New York Magazine’s The Cut, which was published on Friday.

She claimed the incident happened at a campaign rally in early November 2014, when she was attempting to become the state’s lieutenant governor. Biden appeared at the event to help round up support for Democrats in Nevada, she wrote.

Flores was in line, waiting to go on stage at the rally when she claimed to have “felt two hands on my shoulders.”

“Why is the vice-president of the United States touching me?” she recalled.

Flores claimed Biden sniffed her hair and “proceeded to plant a big slow kiss on the back of my head.”

The alleged incident left her motionless and triggered a variety of emotions, she said.

“The vice-president of the United States of America had just touched me in an intimate way reserved for close friends, family, or romantic partners,” Flores wrote, adding that she “felt powerless to do anything about it.”

“Even if his behavior wasn’t violent or sexual, it was demeaning and disrespectful,” she wrote. “I wasn’t attending the rally as his mentee or even his friend; I was there as the most qualified person for the job.”

Flores said she relayed details of the alleged encounter to some of her team afterward, but she wrote in the article that she had no intention of bringing it up further.

“Is it enough of a transgression if a man touches and kisses you without consent, but doesn’t rise to the level of what most people consider sexual assault?” she wrote. “I did what most women do, and moved on with my life and my work.” 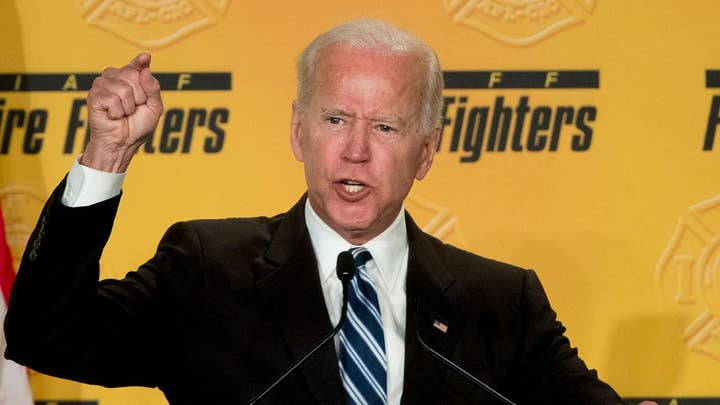 But Flores said she ultimately decided to speak up, considering that a potential White House run from Biden was rumored to be imminent.

In a statement to Fox News, Biden spokesman Bill Russo said the former vice president “was pleased to support” Flores’s 2014 campaign “and to speak on her behalf” at the rally.