"View" host Whoopi Goldberg went off on author Marianne Williamson on Thursday, disputing her campaign's claim that she encountered a double standard in the backlash to her tweet about Hurricane Dorian.

"No, she's not!" Goldberg said, before arguing that Williamson didn't advocate for prayer, but instead suggested that people could "block" the hurricane with their heads.

"That's what it said and you can say, 'I made a mistake' ... but you can't, people aren't stupid," Goldberg said. "They're not and they hear what you said."

Williamson previously tweeted a suggestion that the "power of the mind" could alter Dorian's path. After the 2020 hopeful deleted the tweet, her campaign called it a "metaphor" and decried the "different standard" that Williamson faced on prayer. 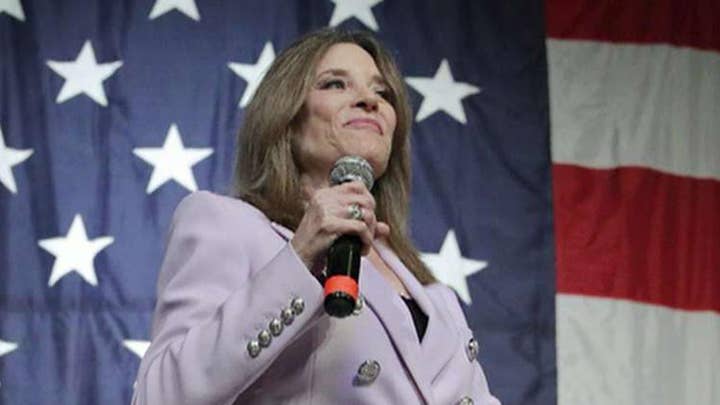 "When others speak of prayer and the mind it’s considered profound, but Marianne is held to a different standard. Because the comment led to confusion it was replaced," a statement provided to Fox News read.

While her campaign tried to downplay any reference to psychic powers, co-host Sunny Hostin said she thought Williamson actually believed she could move things with her mind.

Williamson has received attention for her apparently new age appeal, regularly referring to things like a "dark psychic force" surrounding Trump's presidency. Although Williamson was able to participate in the first two primary debates, she was unable to make the stage for the third debate in September.

"I think she believes she can levitate things with her brain," Hostin said. Co-host Joy Behar chimed in, asking why Williamson wouldn't want to "levitate Trump" instead of hurricanes.

Goldberg added that even if she did have psychic powers, she should say that rather than pretending that wasn't what she "meant."

Co-host Meghan McCain, who has been critical of Williamson previously, cheered the prospect of Williamson claiming during a debate that she had psychic powers.

"The View" has not been a welcoming environment for Williamson, who received some intense questioning while appearing on the program in June. McCain has been especially critical -- balking, during another episode, at the idea that Williamson would succeed in the Democrats' crowded field of candidates.

"I'm not trying to be a hater... and like, literally with some of this stuff, I do think there are some of these people running for president, yes it's admirable to run for president, but at a certain point, Marianne Williamson, you're wasting our collective time and I'd like to see people who are extremely serious that can win," McCain said.