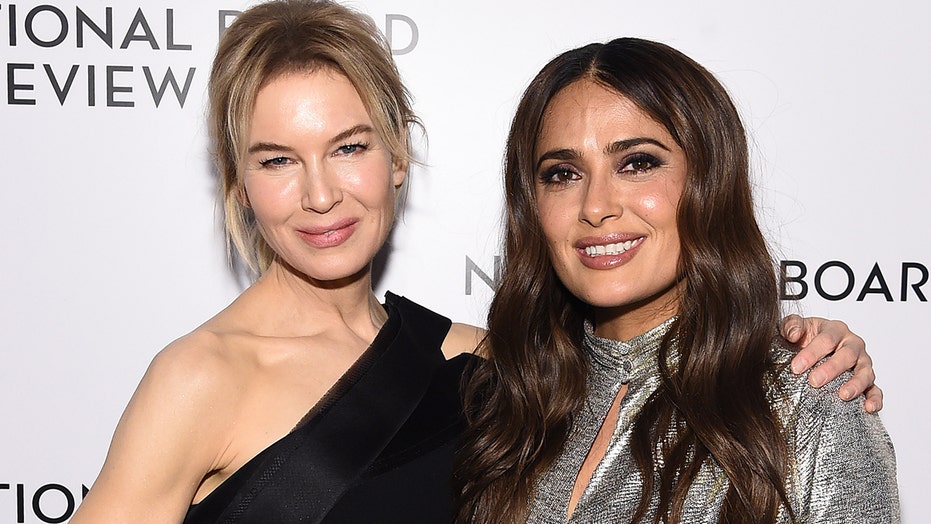 Golden Globes winner Renee Zellweger confuses social media during her acceptance speech. The Twitter-verse was shocked to find out that the 50-year-old native Texan had a Southern accent.

Salma Hayek owed thanks to her close pal and fellow actress Renée Zellweger after the two were nominated for the same Academy Award and Zellweger swooped in to help Hayek, who was having dress troubles.

It all went down back in 2003 when Hayek and Zellweger were nominated for best actress for their performances in “Frida” and “Chicago,” respectively. Zellweger ended up loaning Hayek a dress from her personal collection after Hayek’s original gown ripped apart at the seams.

“It was annoying because at some point I would go, I wish she wins, she’s so amazing,” Hayek, 53, said while presenting Zellweger, 50, with the best actress award at the National Board of Review Awards Gala in New York City on Wednesday, People magazine reported.

Salma Hayek seen donning the dress her close pal actress Renee Zellweger lent her at the eleventh hour and wearing a bracelet by Martin Katz at the Kodak Theater in Hollywood, Calif. (Photo by Steve Granitz/WireImage)

“And even the night before when my big butt exploded the seams of my Oscar dress and I had no dress for the Oscars, she ended up giving me one of her dresses that, thank God, was wide here [gestured around her butt] and stretchy here [gestured around her breasts]. That’s what I wore for that night,” the “Desperado” star recalled of the Carolina Herrera gown she sported on the red carpet that year.

Despite both women being deserving of the coveted accolade, they ultimately lost out to Nicole Kidman -- who took home the honor for her performance in “The Hours.”

“I really wish that they would have a tie so that we could both win but we both lost,” Hayek said of Zellweger, whom she met in 1996 and spent New Year's Eve together, according to People.

Zellweger also took home a Golden Globe award for best actress in a drama motion picture on Sunday for her performance as the beloved Judy Garland in “Judy.” In accepting her fourth Globe win, she spoke about returning to Hollywood for a film that critics have been hailing as a comeback performance.

“Wow, I really am up here,” Zellweger said. “Well, hi everybody, it’s nice to see you. Y’all look pretty good 17 years later. Thank you to the [Hollywood Foreign Press Association, the Globes’ organizing body] for inviting me back to the family reunion, especially with all these extraordinary ladies this year.”

“I mean it; your work moves me. It moves me,” she added. “And I’ve been cheering for y’all from theater seats for a long time.”