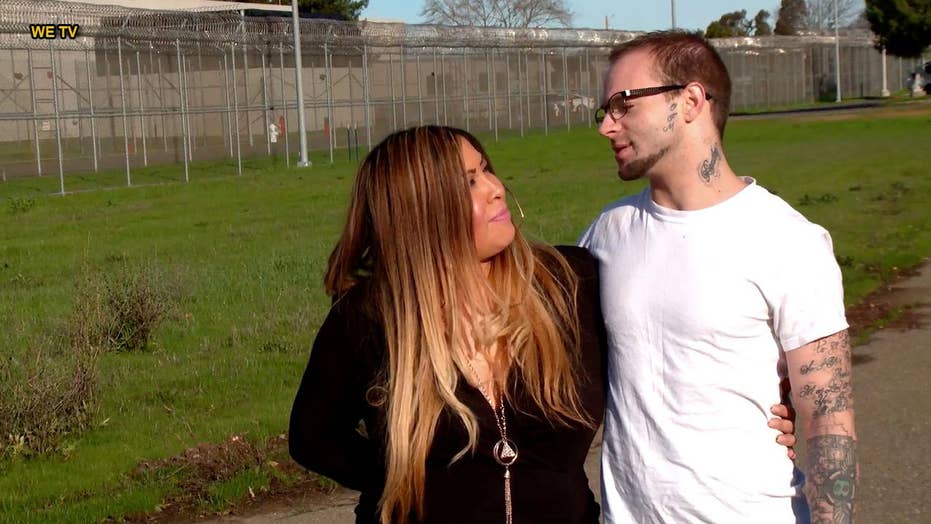 'Love After Lockup' castmates reveal challenges of falling for an inmate: 'There's no privacy'

'Love After Lockup' castmates Lizzy, Glorietta reveal challenges of falling for an inmate. The women also explain why they chose to chronicle their romances for the popular WE TV series.

NEW YORK – Falling in love with an inmate has some major cons.

Glorietta met Alex through her cousin who was serving time at the same prison. During those eight months of courtship behind bars, the couple never spent time with each other without a glass partition between them.

The nurse’s assistant and mother of one is one of seven couples chronicling their prison romances in WE TV’s reality TV series “Love After Lockup,” which examines whether a relationship with an inmate can truly survive the test of time. The show, one of several prison-themed reality programs launched over the past decade, was the fastest-growing new cable series in 2018, the New York Times reported.

“It’s really challenging and complex,” Glorietta told Fox News. “When an inmate is incarcerated, you don’t have that physical intimacy, and so it’s really difficult sometimes to really keep the spark alive. They can write letters that are a little more X-rated or they can talk on the phone.”

‘LOVE AFTER LOCKUP’ CASTMATES EXPLAIN WHY THEY FELL FOR INMATES: ‘IT’S A BIT SUPERFICIAL’

Glorietta and Alex of "Love After Lockup." (WE TV)

“You really don’t want to do things like phone sex because people are listening on the other end, so that’s obviously uncomfortable,” she continued. “There’s no privacy. So it is quite challenging to date an inmate [who] is incarcerated when you’ve never spent time together behind prison walls. You don’t really know a person on… a different level until you actually live with that person. And even so, that can take a few years sometimes… There are challenges for sure.”

Lizzy first met Daniel at a drive-through window of a barbecue restaurant where he was working. While the pair quickly hit it off, the relationship only last a week before Daniel was arrested for possession of narcotics.

"Love After Lockup" has been an ongoing hit for WE TV. (Photo by WE TV)

RAPPER T.I. SAYS HE ACCOMPANIES HIS DAUGHTER TO THE GYNECOLOGIST EVERY YEAR TO ENSURE SHE’S A VIRGIN

“The biggest challenge with dating someone who’s incarcerated is the fact that they’re away, you know?” she explained. “They’re gone. It’s hard to build a relationship with someone that you don’t get to see every day or very often… They’re so far away… And everything that you do, no matter what, is monitored: phone calls, letters, visits — all of it is monitored one way or another. You don’t get a good sense of privacy. You can’t build an intimate relationship like you would want to because there’s always someone, something watching everything that you’re doing.”

“ [But] It’s… phone calls, letters, things like that, that keep the romance alive,” continued Lizzy. “It’s definitely hard because actions speak louder than words. But when it comes to dating someone who’s incarcerated, you have to trust them as much as you can… You only know what they tell you. And so, in order to make that relationship work, you have to be a trusting person and pray to God they don’t break your heart.”

Lizzy and Daniel of "Love After Lockup." (Photo by WE TV)

Despite the two women being determined to make their relationships work, they’re also guilty of receiving disapproval from loved ones. Glorietta noted her significant other was doing time for violating his probation due to drugs. Alex also has a history of burglary and identity theft.

A rep for WE TV confirmed to Fox News the men have since been released.

“My friends and family were not too fond of the idea because it’s the unknown,” Glorietta admitted. “It’s unfamiliar territory due to the fact that they don’t know him… You get a bad perception of someone because they’re incarcerated. It’s an inmate and you don’t know what to make of that. It’s a lot to take in. It can be overwhelming. And my friends and family are overprotective of me… They were very skeptical of the relationship. It’s definitely a work in progress.”

Lizzy, who was previously unlucky in love, was warned by her family before falling head over heels.

The women of "Love After Lockup" admitted their loved ones weren't so accepting of their relationships. (Photo by WE TV)

JULIE ANDREWS SAYS SHE WAS TOO 'TRULY STONED' TO ACCEPT A ROLE IN 'THE WOLF OF WALL STREET': 'I DO REGRET IT'

“My friends and family weren’t too happy knowing that I was dating someone [who] was incarcerated,” said Lizzy. “Especially since my family had only met Daniel once prior to him being arrested. My mom and my sisters were very… open about their opinion and how they felt… [They believed] me being with someone who was incarcerated was a really bad idea… due to the fact that I had a prior relationship that took me down the wrong path. And so with Daniel being incarcerated with drugs, they thought that when he came home - if he came home - he was just going to bring me down that same path again.”

The women are also aware of the risks involving a relationship with a convict. As chronicled in the show, some prisoners would attempt to connect with someone on the outside, only to manipulate them, usually for money.

“I never really gave Daniel any money,” said Lizzy. “I didn’t put money on his books or his commissary, nothing like that… I think Daniel felt lonely, more or less, and I was only just a phone call away. I always answer the phone no matter way. If we were fighting, I still answered. If something went wrong, if I was happy, if I was busy, if I was working, if I was in school — I always answered his phone call. I feel that gave Daniel a sense of security. I don’t think he was taking advantage or taking me for granted. I think I just filled this empty hole that he had.”

Glorietta said that any relationship, no matter their circumstances, are bound to have obstacles.

Lizzy said she believes her beau Daniel deserves love like anybody else. (Photo by WE TV)

“The challenges are different for everyone,” she said. “Every relationship is different… It’s a lot of time and energy that you put into a relationship as is, and you just go that extra mile for someone that you really love as well. You really want the best and hope for the best, but you need to be prepared for everything. No relationship is perfect. You’re going to have your ups and your downs… You can’t predict the future. God only knows what direction our relationship goes in, but maybe with a little counseling or therapy — or praying if you’re religious — anything’s possible.”

Lizzy stressed that despite cameras chronicling their personal relationships, developing a relationship with a prisoner is far from glamorous. She hopes her experience with “Love After Lockup” will encourage other women to share their stories and not feel so alone anymore.

“Dating someone who’s incarcerated and bring them back into society, it’s jumping in the deep end,” said Lizzy. “You’re putting everything that you have on the line to help this person be another functioning member of society… You do so much for just one person and hope it’s not going to be thrown away in the end. You give up so much of yourself to help them find who they are and where they belong.”

The women of "Love After Lockup" were candid in sharing how they keep the spark alive in their relationships. (Photo by WE TV)