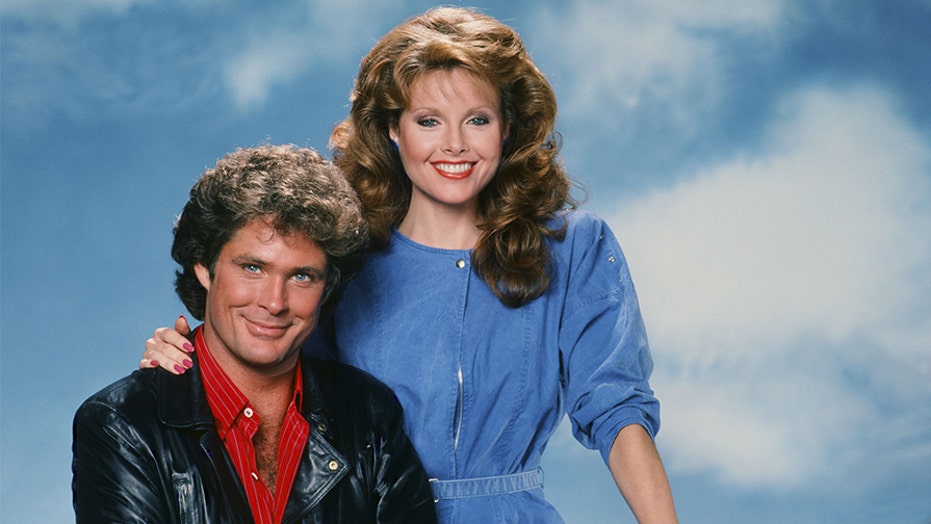 The Texas native who found fame as April Curtis in “Knight Rider,” was originally studying piano and pursuing modeling in New York City when Aaron Spelling saw one of her commercials for Breck shampoo that aired during the Super Bowl.

“He contacted my agent,” the actress recalled to Fox News. “I was then flown out to the West Coast. And before I knew it, I was working in television.

Holden, now 61, kicked off the early ‘80s appearing in numerous hit TV shows, including “Happy Days,” “Magnum, P.I.,” “Three’s Company,” and “Taxi” — just to name a few. And in 1983, she was offered the opportunity to be in “Knight Rider,” alongside David Hasselhoff. The series chronicled a lone crime fighter as he battles the forces of evil with a virtually indestructible and artificially intelligent supercar.

“The producers knew my work, but they wanted to see me and David together to find out if we had any chemistry,” Holden explained. “David and I did a scene, and that was it. I just remember laughing a lot. And I was just in awe at how tall he was! You can never really tell on television, but he’s about 6’5”. And he’s just as charismatic in person — and handsome — as he is on screen. We really had a great time. Before I even got home, my agent called me and said the producers loved it and really wanted me for the role. It was magic. Some things are meant to be.”

While “Knight Rider” originally premiered in 1982, Holden insisted she wasn’t worried about being the new girl on set.

“You know, I really didn’t think about it,” she said. “It was just another opportunity that I was grateful for. I don’t think I had even watched the show that much up until that point.”

Holden also credited Hasselhoff, the show’s star, for welcoming her on set.

“We had a great time,” she said. “It was a lot of fun. I can remember times when we laughed so hard we could hardly continue filming. But it was work. When you’re television, it’s all business. There are grueling hours… There’s a lot of setups in a day, sometimes moving from location to location in a day. It can be tiring. But we were dedicated. And we really enjoyed it so much.”

Hasselhoff, now 67, wasn’t the only one who made Holden feel right at home. She also had fond memories of Edward Mulhare, who played Devon Miles. The actor passed away in 1997 at age 74 from cancer.

“He was such a gentleman,” said Holden. “So dignified. He had a dry sense of humor. We always had fun in the makeup trailer. But gosh, what a gentleman. We were so sad when we lost him.”

And then there was KITT.

“There were several cars — nine or 10 — that were designed to do different things,” she explained. “One was to hide the driver in the front so it looked like KITT was driving alone. Another was mainly for the jumps. There was one used for all of the interiors. One guy in Chicago has the car I drove in a scene. Nobody drove KITT ever except David, but April did drive KITT in one episode. And now he has that particular car!”

However, Holden’s time at “Knight Rider” came to a screeching halt in 1984 when she left the series. “Knight Rider” officially came to an end in 1986. Holden claimed it was her management, not her, who wanted her out despite the show’s success.

“I didn’t really make the decision,” she admitted. “I’m mature and wiser now. But at the time, I was younger and did what management told me to do. I was getting many offers at the time for feature films overseas due to the popularity of the show. Management felt I would benefit from that and so I followed their advice. But, I probably would have stayed because I was having such a blast.”

Still, Holden said she has stayed in touch with her former castmates over the years, and they still attend events across the globe to meet fans.

“We all knew the show was successful,” she said. “We were aware of the ratings, and we were on the cover of magazines. But you don’t really have any awareness once it goes out of how it’s resonating with people. For a show to be so beloved that it’s still celebrated with events years later… it’s an honor. And what’s not to love? The good guy always won. And that value is meaningful to people. They want to instill those same values in their children.”

“A young man from Malawi, Africa came up to me at an event and said, ‘My family didn’t even own a television,’” Holden continued. “'Our village shared one small television. And that’s how we got to watch "Knight Rider" — on that TV.’ He’s now a graduate from Stanford University because he felt, like the show said: One man can make a difference."

"I still get letters from him," Holden reflected. "A lot of actors don’t realize what a powerful medium television is. It can influence young minds and create a positive impact. That’s why we need to be very, very responsible for what we put out there.”

Holden has enjoyed a lasting career over the years. Most recently, she completed the upcoming 2020 film “Canaan Land” where she shows off her singing chops as a gospel singer.

And while Holden may have left the party early, she still treasures her time bringing her character on "Knight Rider" to life.

“I was never typecast because of April,” said Holden. “April wasn’t just the sexy girl. She was intelligent. She was a researcher, a computer whiz and resourceful… She was someone I admire. I wasn’t typecast, but it wouldn’t have bothered me if I was!”

Still, Holden admitted that she wouldn’t be surprised if her conservative values may have gotten in the way of nabbing roles over the years.

“I certainly don’t discount the possibility,” she said. “Not that people were ever so blatant to say so. But I’m very patriotic. I’m proud of my beliefs, and I’m always up for a healthy debate. I know a lot of people are afraid to admit they’re conservative due to fear of repercussions, but I’m not ashamed. I’m proud. I’m not shy about standing up on principle.

“I think that our way of government and the government our founders create is a miracle. It created a miracle of a country that is unlike any other country in the world… We have the freedom to help others around the world. My father served in WWII proudly. We had many discussions around our family dinner table about our country… I love this country and I am always at its service.”

Holden’s career may have taken an unlikely turn, but she wouldn’t have had it any other way.

“I love life,” she said. “I cherish every moment… I think God has given us all unique abilities and gifts… And I think he put the dream in our hearts to motivate us to use those gifts for the betterment of the world, for the betterment of others. And it’s our duty to do so… That’s what I try to do.”