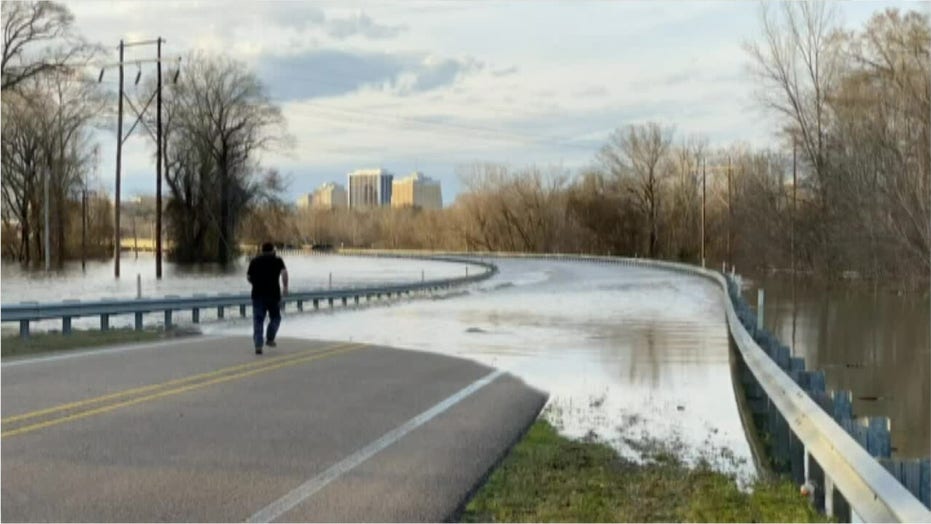 Amid heavy downpours and flooding in Mississippi, one Jackson man made the best out of the situation by catching his ‘dinner’ on the road.

As a swollen river forced hundreds to evacuate around Mississippi's capital, one man appeared to make the best of the situation over the weekend, plucking a fish from a flooded road.

Officials in Jackson said Monday the Pearl River appeared to have crested at just under 37 feet and continued to fall, but Mississippi Gov. Tate Reeves said at a news conference that the state is "not in the clear yet" while urging evacuees not to rush back.

"Please do not move back into your neighborhood or into your home until authorities and officials give you the OK to do so," Reeves said.

He said only 16 search-and-rescue missions were needed, even though as many as 1,000 homes were flooded.

"We are waiting for the water to recede," White told Fox News' Sandra Smith.

White added that people are heeding warnings to evacuate and that officials are hopeful by the end of the week that conditions will improve enough to allow people to go back to their homes.

"We would like for people to wait for the water to go completely down," White said, citing how high the water is and that debris in the water can be dangerous. Trash has clogged up some of the waterways during flooding.

In the Jackson area, one man was filmed running onto Old Brandon Road and plucking a large bowfin from the water that covered the street. Kenneth Callahan shared the footage to Twitter, saying he spotted the large fish "struggling" across the road. He tagged Seth Rogan.

"That’s when your redneck doppelgänger materialized out of the swamp and caught himself some dinner," Callahan wrote.

The man who posted the video later said the man released the fish back in the water, downstream of the road.

"His mama didn’t raise no hooligan who don’t respect his fish," he wrote.

A near-record rainy winter has forced authorities to release water from swollen reservoirs, potentially worsening the flooding for those living downstream.

Sandbags protect the front of a credit union in downtown Jackson, Miss., as floodwaters from the Pearl River continue to rise in the Capital city., Monday, Feb. 17, 2020. (https://www.foxnews.com/category/weather)

Residents in Jackson have been paddling through neighborhoods in canoes, kayaks and small fishing boats to check on their houses. High water also has surrounded many businesses; owners who may have escaped the damage now cannot service customers.

“It’s just a bad situation," Todd Reeves with Snapshot Publishing told WLBT-TV. "I feel terrible for everybody that has been displaced. It’s not a fun thing to go through.”

While the Pearl River may have crested, forecasters are warning that heavy rain is expected again this week in parts of the Southeast. Some of the hardest-hit areas in Mississippi were under a flash flood watch Tuesday.

The National Weather Service said rainfall amounts of up to 2 inches  — with higher amounts possible in some spots — were expected to fall in a short amount of time in central Mississippi on Tuesday, which could cause flash flooding and worsen ongoing river flooding in the region.

Additional flooding is likely across the region. (Fox News)

"We have got a front that's stationed across the Mississippi River Valley," Fox News Senior Meteorologist Janice Dean said on "Fox & Friends." "Historic flooding for parts of Mississippi and Alabama and unfortunately, we have more rain on the way and flash flooding will be an ongoing concern -- not only today but throughout the workweek."

Heavy rain is in the forecast across areas that have already seen flooding this month. (Fox News)

The NWS' Weather Prediction Center is projecting the greatest likelihood of heavy rains in a band from eastern Louisiana across central parts of Mississippi and Alabama and into far west Georgia.