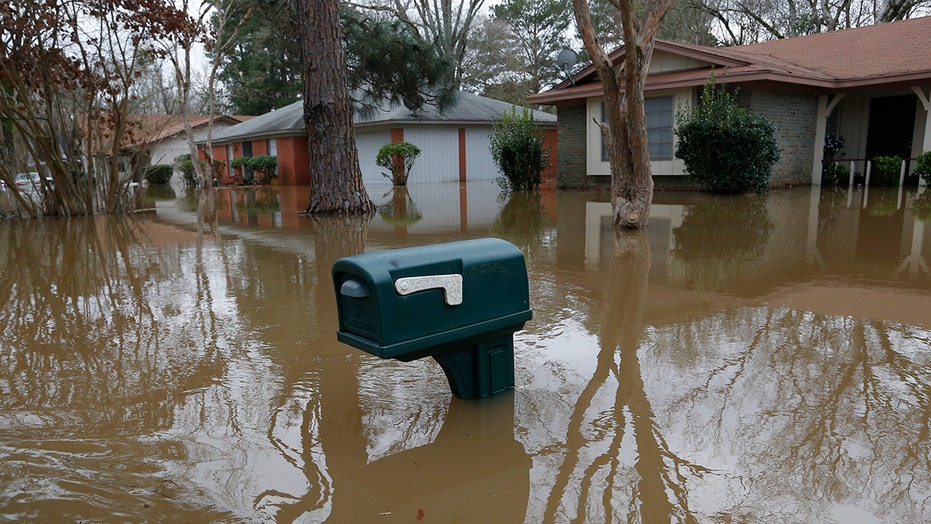 More rain in the forecast could put thousands of additional homes at risk; Steve Harrigan reports from Jackson, Mississippi

The swollen river in Mississippi's capital city crested Monday at the highest level it's been in decades as the state's governor warned the danger hasn't subsided, with more rain in the forecast.

Gov. Tate Reeves told reporters at a news conference Monday the National Weather Service believes the Pearl River in Jackson has crested at 36.7 feet, above major flood stage at 36 feet but still below the record of 43.3 feet. The water level has not changed for several hours, according to Reeves.

"Although this is relatively good news for Jackson and Central Mississippi, we as a state are not in the clear yet," he said.

So far, officials have conducted 16 assisted evacuations, in addition to 200 door-to-door visits to advise residents of the rising waters.

In one Jackson neighborhood, residents paddled canoes, kayaks, and small fishing boats to check on their houses on Sunday after being evacuated.

Floodwaters could be seen lapping at mailboxes, street signs, and cars that had been left in driveways. One to two feet of water was also seeping into homes on Monday morning.

Over the weekend, business owners in downtown Jackson said they had not seen the water rise so high in decades.

"It's been 40 years since we had a flood. So we never anticipated this," said Ricky Irby, owner of Capital City Motors, told WLBT. "We've been here for 15 years, a family-owned business, and this is just one of the bumps in the road we've got to deal with."

The Mississippi Emergency Management Agency has advised that nearly 2,400 structures across the three Mississippi counties closest to the Pearl River and its Barnett Reservoir — Hinds, Rankin and Madison — could get water indoors or be surrounded by floods.

As waters have risen, Jackson Mayor Chokwe Lumumba said power had been shut off to 504 residences as a safety precaution, and about 30 people were at a shelter.

Blaine Henderson, right, reaches to tag a mailbox as Pearl River as he and his friend Jonah Valdez, both 12, play in the floodwaters of this northeast Jackson, Miss., neighborhood, Sunday, Feb. 16, 2020. (AP Photo/Rogelio V. Solis)

Authorities believe the flooding will rank as third highest, behind the historic floods of 1979 and 1983. (AP Photo/Rogelio V. Solis)

“It’s a huge inconvenience and, for some, it will be way more than a minor inconvenience,” Nathaniel Green told WLBT. “But this is part of living by a river. We live by a river, it’s the river city so it floods.”

Reeves told reporters on Monday the state's department of transportation has reopened lanes on Interstate 55 closed by flooding, but that motorists should be careful for changing conditions. He advised people to "turn around, don't drown" if coming across floodwaters.

The flooding now impacting the Jackson area was spawned by days and days of heavy rain earlier this month. Besides the flooding in Mississippi, a landslide was reported in Tennessee due to a hillside weakened by rain.

Once the Pearl River crested Monday, officials said it will take the water at least three to four days to go down significantly. Part of the reason is that forecasters expect more rain between midday Tuesday and Wednesday evening.

River flooding is expected to continue throughout Mississippi over the next several days. (Fox News)

"Unfortunately, more rain in the forecast," Fox News Senior Meteorologist Janice Dean said on "Fox & Friends." "It's not going to be a deluge but we are going to see the potential for more rain as we go through the next 24 to 48 hours."