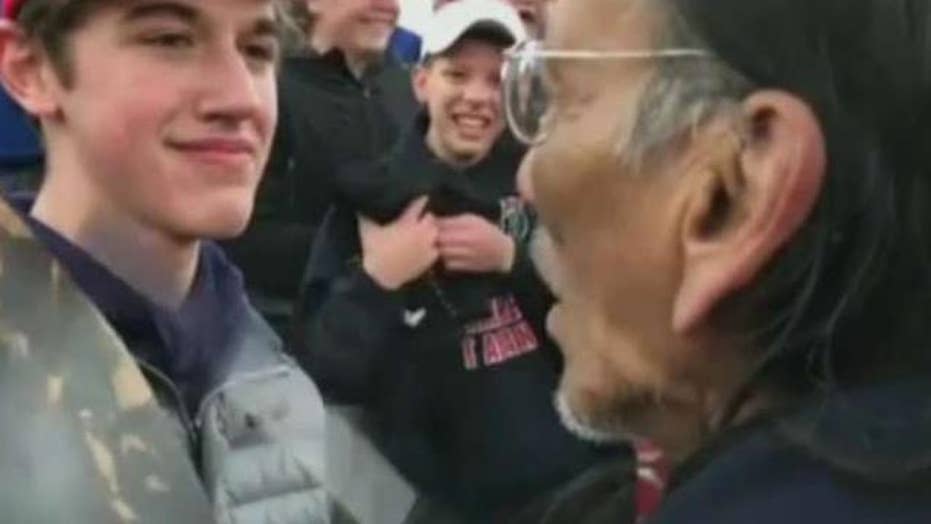 An attorney in the $250-million lawsuit filed by a Covington Catholic High School student and his family against The Washington Post told Fox News the colossal damages being sought are “appropriate in this circumstance” – and hinted liberal comedian Bill Maher could soon be served.

The comments from Todd McMurtry last week on "America’s Newsroom" come as law experts are calling the suit – filed on behalf of 16-year-old Nicholas Sandmann "by and through his parents" Ted and Julie Sandmann – everything from a “significant case” to one bound to be thrown out.

“Other commentators have sought to say that our damages are too high, but when you think about that those damages never go away and live on the Internet forever, I think they are appropriate in this circumstance,” McMurtry said.

Sandmann was at the center of a January firestorm when a viral video emerged showing a confrontation between Covington high schoolers wearing "Make America Great Again" hats and Native American activist Nathan Phillips at the March for Life in Washington, D.C. Footage that later emerged and showed a more complete record of the encounter revealed the standoff didn't unfold as many had initially assumed.

The Washington Post lawsuit is the first of its kind. It was filed on behalf of Sandmann by attorneys Lin Wood and McMurtry, with the latter saying more “will continue to roll out over the next 30 to 60 days.” But the novel litigation also has many observers raising questions about the team's chance for success.

One of the key issues threatening the suit's survival is whether or not Sandmann is a private figure, as his attorneys claim, or a limited-purpose public figure. That type of public figure was described by the Supreme Court in a 1974 ruling as someone who “thrust themselves to the forefront of particular controversies in order to influence the resolution of the issues involved” and therefore “invite attention and comment.”

The designation is important because, if Sandmann is ruled to be the latter, his attorneys will have to clear a higher bar and prove The Washington Post acted with actual malice against him when it published a “series of false and defamatory print and online articles” about the Covington incident, as opposed to simply proving the newspaper's negligence.

“First, Nick Sandmann is a private individual so we only have to prove negligence,” McMurtry said. “However, if a ruling were to be different and they were to consider him an involuntary public figure and we had to prove malice, we would be able to do that because the Washington Post is a weaponized news outlet that used its power and strength to destroy Nick Sandmann’s reputation."

He added: “And they did that without adequate and appropriate levels of journalistic integrity and reporting and that in itself is malicious. So, I feel comfortable with either standard.”

The lawsuit, filed in a Kentucky district court this week, accuses the newspaper of fanning the flames of the controversy, claiming it “effectively provided a worldwide megaphone to Phillips and other anti-Trump individuals and entities to smear a young boy who was in its view an acceptable casualty in their war against the President."

“This kid is not a public figure,” he told the website. “He didn’t choose to run for office, he’s a kid in school who is applying for colleges and his reputation has been diminished in the eyes of some, and I think you have to distinguish between a high school kid and somebody who is the President of the United States, or a governor of a state or a justice of the Supreme Court.

Dershowitz added he believes Sandmann’s attorneys “have a significant case” and that he is “interested to see what the Post says and how it justifies reporting that turned out to be less than accurate.”

But if it came down to having to prove actual malice, then Sandmann’s legal team faces a tougher road, experts say.

“They got a big, big hurdle to overcome and that is the standard of proving actual knowledge of falsity or reckless disregard for the truth,” Frederick M. Lawrence, a distinguished lecturer at Georgetown Law and secretary and CEO of The Phi Beta Kappa Society, told Fox News.

“My hunch on this… even if [The Washington Post] got it wrong, they did not recklessly get it wrong and, as a result, they will prevail,” Lawrence added.

He compared discussion about the Covington lawsuit to the 1964 New York Times v. Sullivan case, in which, the Bill of Rights Institute says, the Supreme Court “held that the First Amendment protects newspapers even when they print false statements, as long as the newspapers did not act with ‘actual malice.’"

“The whole reason we have this heightened standard is this is not supposed to be a ‘tie goes to the runner’ proposition,” Lawrence told Fox News.

STATEMENTS OF OPINION VS. FACTS

Many celebrities wasted little time taking to the Internet to tear into the Covington students as the viral video circulated in January. A particular target was Sandmann, whom Maher on his HBO show labeled a “smirk-face kid.”

“I don’t blame the kid, the smirk-face kid. I blame lead poisoning and bad parenting. And, oh yeah, I blame the f---ing kid,” he said.

Others soon joined in on the criticism, with "Will and Grace" actress Debra Messing sharing an image of Sandmann with the caption “mocking, condescending, disrespecting, A—HOLE” and comedian Kathy Griffin urging her followers to “name these kids” and “shame them."

Only some of the celebs – such as film producer Jack Morrissey, who initially posted a gory cartoon with the caption “#MAGAkids go screaming, hats first, into the woodchipper” – issued apologies and deleted their messages.

McMurtry told Fox News that “certainly CNN and Bill Maher did things that we consider to have crossed the line."

“We think that the statements they made are defamatory, they’re not humorous and so certainly Bill Maher is somebody we are looking at very carefully and HBO for allowing him to make those defamatory statements,” he said.

However, if Sandmann’s attorneys pursue lawsuits against these organizations and other institutions similar to The Washington Post, what judges deem as fact and what they decide is opinion could end up making or breaking the case.

“Opinions are not statements of falsity,” Lawrence told Fox News. “If I say ‘my neighbor is a creep’ it may not be nice… but it’s an opinion.”

Ben Zipursky, a professor at Fordham Law School, also says defendants would likely raise questions as to whether the statements are defamatory at all, and that The Washington Post lawsuit might wade into the opinion vs. fact debate, too.

“Those are the kinds of issues that the Washington Post lawyers are going to want to push on early because they provide an opportunity to get rid of the case entirely,” he told Fox News.

The newspaper, in its only comment so far on the lawsuit, said earlier last week it is “reviewing a copy of [it], and we plan to mount a vigorous defense.”

Ultimately, Wood says: “things have got to change and there has got to be accountability.”