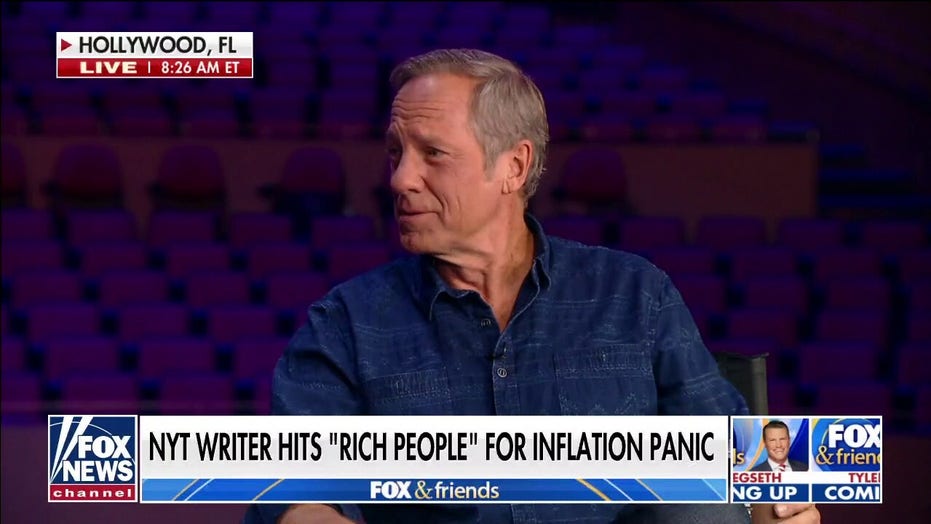 After a New York Times contributor claimed inflation fears are being driven by "rich people," FOX Business’ "How America Works" host Mike Rowe wondered whether or not she was actually serious.

"That’s an extraordinary article or tweet or whatever it was to the point where I mean, is she serious?" Rowe asked on "Fox & Friends."

Co-host Brian Kilmeade asserted that he thought the writer was being genuine in her tweet. Rowe responded that if so, the tweet indicated a level of "willful ignorance" that’s almost difficult to comprehend.

"You kind of look over your shoulder and say, ‘Are you messing with me?’" Rowe added.

The FOX Business host noted that people he knows in the construction trade are paying 100% more to fill up their trucks than they were six months ago.

Mike Rowe speaks with the crafter of the physical 2021 Patriot Awards, Bobby Reuter

"All the stuff you see about inflation in the news is driven by rich people flipping their sh-t because their parasitic assets aren’t doing as well as they’d like and they’re scared that unemployment benefits + stimmy checks + 15 minimum wage + labor shortage is why ~[just my thoughts]~" Jeong tweeted.

Critics blasted the liberal journalist, with many claiming she's out of touch with how most Americans are impacted by the current economy.

Jeong remained defiant of her Twitter critics, later taunting them.

"[W]aaaaah the working class’s income is keeping pace with or outstripping inflation but my capital gains aren’t boo f---ing hooooo," Jeong exclaimed. "very spooky scary to think of the moment the poors realize inflation favors debtors and that that’s what the hubbub is about, and not milk prices."

"I have like all notifications turned off on here and I turned off comments on the original tweet, so mostly I know I’ve riled people up real bad because of the clustering of death threats in my email inbox and well… I don’t regret it," she added.

Nikolas Lanum is a production assistant for Fox News Digital.