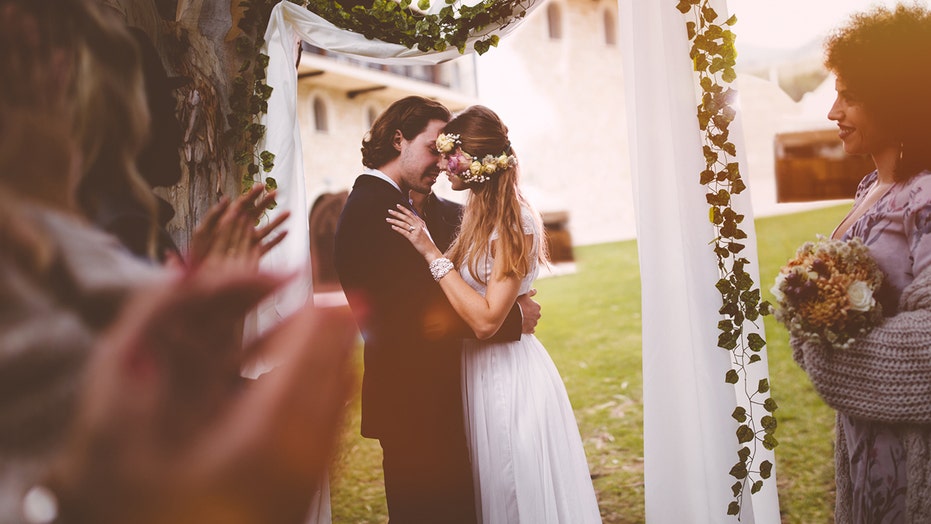 Weddings are great when they go off without a hitch. But for some, that special day is packed with potholes, sometimes even before the bride gets to the aisle.

Here's a look back at the biggest wedding fails of 2019. 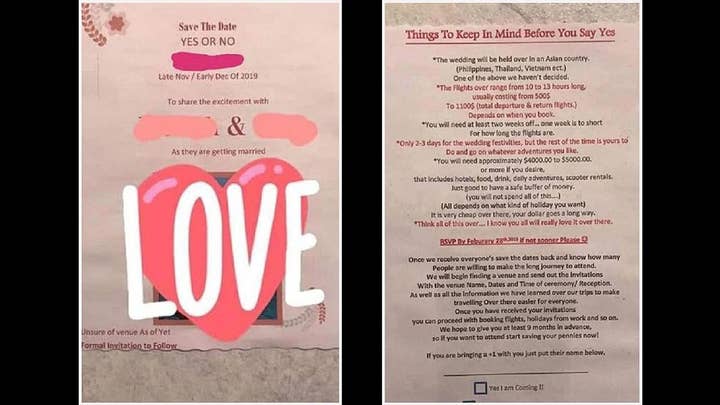 The year kicked off with an overly complicated two-page save-the-date invite that was widely slammed as a fail for its “aggressive” tone and lack of concrete details.

The bride was shamed for her wordy invites -- titled “Things to Keep in Mind Before You Say Yes” -- which included warnings such as, “You will need at least two weeks off” and “$4,000 to $5,000” to attend, despite the fact that the bride-to-be had not yet picked a venue. She did, however, ensure guests that the wedding would be held “in an Asian country.”

7 OF THE MOST MISBEHAVED WEDDING PARTIES OF 2019

“Hospital food” isn’t what you want to see on a wedding menu. But that's what one couple was accused of feeding their wedding guests, who were told they would be dining from a “luxury” menu provided by the four-star hotel where the reception was held.

Pictures of the menu -- which included pizza with tuna from a can, frozen Yorkshire puddings and baked beans -- were shared on the popular Facebook shaming forum “That’s It I’m Wedding Shaming,” where others in the group weighed in on the menu fail and claimed to have had “better food in school dinners.”

Fast food proposals might seem innocuous -- but that doesn’t mean they're immune to being shamed online.

A man who chose to propose to his girlfriend by sticking a diamond ring into the bun of a McDonald’s Big Mac opened himself up to ridicule when the photo was shared widely on social media. Most who saw the stunt slammed it as a total fail, with one cleverly dubbing it a “McNightmare.” Another simply wrote: “Big Mac? Big No!”

This probably wasn’t the look the newlyweds were going for with their wedding cake.

A bride and groom were mocked for their wedding cake icing fail, which many online likened to a “runny poop.” The unappetizing brown and gold cake sported three square tiers in what looks to be gold fondant and was topped with a splotchy brown icing that ran down the side of the cake. The chocolate goop also had some gold accents, which one snarky social media user compared to "runny poop with corn.”

This cake went from three tiers to floor.

In a series of images, the bride and groom and seen beginning to cut the stacked naked-style wedding cake, complete with macaron decorations, before the table tips and the cake crashes to the ground. (Kennedy News)

The exact moment a couple’s wedding cake slides off of its pedestal and onto the ground was captured by their wedding photographer, preserving a moment the pair may want to forget. In the images, the bride and groom are seen cutting into the naked-style wedding cake just before the table tips, sending the cake -- and the newlywed’s perfect reception -- crashing to the ground.

Continuing with cakes, another couple was left furious when their peacock-themed wedding cake more resembled a “lopsided turkey with leprosy” rather than the regal bird they were expecting.

Rena Davis, from Georgia, had ordered her perfect wedding cake after showing the baker an image of a similar one she had found online. (Kennedy News)

Rena Davis, from Georgia, had ordered a wedding cake based on a photo she saw online, which depicted a beautiful peacock-themed cake made from smaller cupcakes. After the baker confirmed with the bride she could make the cake, Davis said she was presented with a “lopsided mess” that left her “heartbroken.”

After receiving a refund -- which she claimed she only received because of her viral post -- Davis went and bought a cake at the store on the morning of her wedding.

A picture is worth a thousand words… and 60,000 Twitter likes.

A couple’s engagement photos went viral after a man nearly drowned his fiancée in champagne during a “botched” attempt at recreating a Pinterest photo.

The couple said they were attempting to recreate a picture found on Pinterest. (Chandler Lefever / Saltwater Summit Photography)

Alyssa Snodsmith and then-boyfriend Collin Hewett were hoping to have a romantic photoshoot, which involved him pouring champagne into her mouth in front of a woodsy backdrop. However, Hewett’s heavy-handed pour left his wife gasping for air -- and Twitter howling with joy.