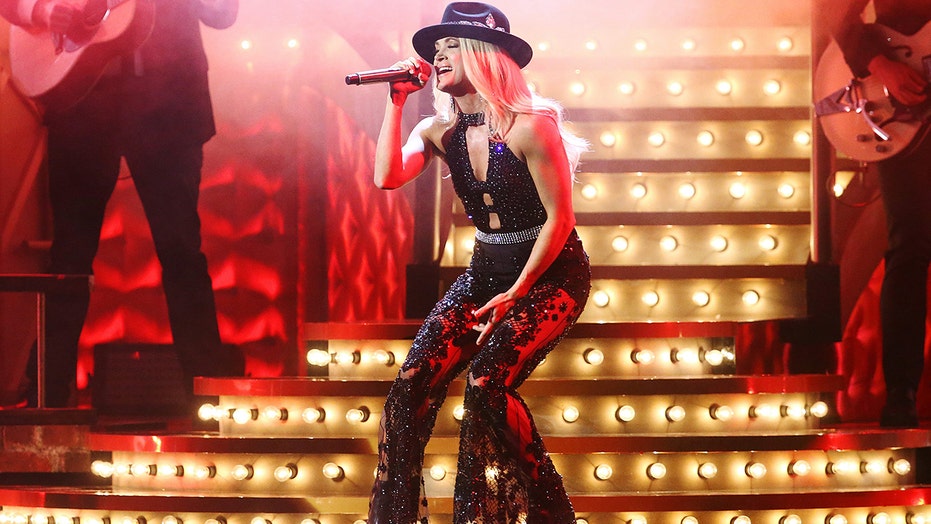 Miranda Lambert couldn’t contain her excitement after Carrie Underwood wrapped up her performance of at the 2019 CMAs.

Pulling double duty as she often does – the host and performer, donning a black sequin bodysuit featuring sheer lace detailing and a black fedora hat, delivered a show-stopping rendition of her latest single, “Drinking Alone” with the help of a noir-style production.

Once Underwood's performance was completed, cameras panned to Lambert, 36, who was left in awe as she sat in the audience with husband Brenden McLoughlin and marveled at her fellow country star peer's stage presence.

The "It All Comes Out in the Wash" singer was spotted smiling as she stood up to applaud Underwood.

Earlier this week, Underwood, 36, felt it difficult to keep her composure during an appearance on the “Ty Bentli Show” after learning Lambert praised her for her work in the industry since making it big on “American Idol.”

"To me, entertainer of the year is who’s represented the genre in every way the best for that year,” said Lambert. “It was just kinda haunting me, I really felt compelled to say something.”

“Watching Carrie host the CMAs pregnant, and also do the [Sunday] Night Football campaign, and also have a brand, and also work with charity, and be a wife, and be a mother, and then host with two legendary country artists … I just know how much work that is," she added.

NASHVILLE, TENNESSEE - NOVEMBER 13: (FOR EDITORIAL USE ONLY) Carrie Underwood (L) and Dolly Parton speak onstage during the 53rd annual CMA Awards at the Bridgestone Arena on November 13, 2019 in Nashville, Tennessee. (Photo by Terry Wyatt/Getty Images,) (Getty)

Concluded Lambert: "She works harder than I do, and I work hard. And I just felt like, as a whole, with her tour and everything she encompasses and what she’s represented for country music, she deserves it. She just does."

"She’s always been just super supportive and super sweet,” Underwood said on Monday, adding that the nomination in itself means more to her than just the recognition she receives for her work in the industry.

NASHVILLE, TENNESSEE - NOVEMBER 13: (FOR EDITORIAL USE ONLY) Brendan Mcloughlin and Miranda Lambert attend the 53rd annual CMA Awards at the Music City Center on November 13, 2019 in Nashville, Tennessee. (Photo by John Shearer/WireImage,)

“First — I’m kinda emotional,” admitted Underwood. “I mean, it’s a nomination for all of us, and it would definitely be, you know, not just a win for all of the things that we’ve been doing, all that stuff that she mentioned that I’m so lucky and blessed enough to do, but I mean you know you watch other women in this industry do the same thing.”

This year, Underwood is one of five nominees for entertainer of the year and is the only female performer in the category.

In the past two years, no women have been up for the category of entertainer of the year. The last woman to win the title was Taylor Swift in 2011.