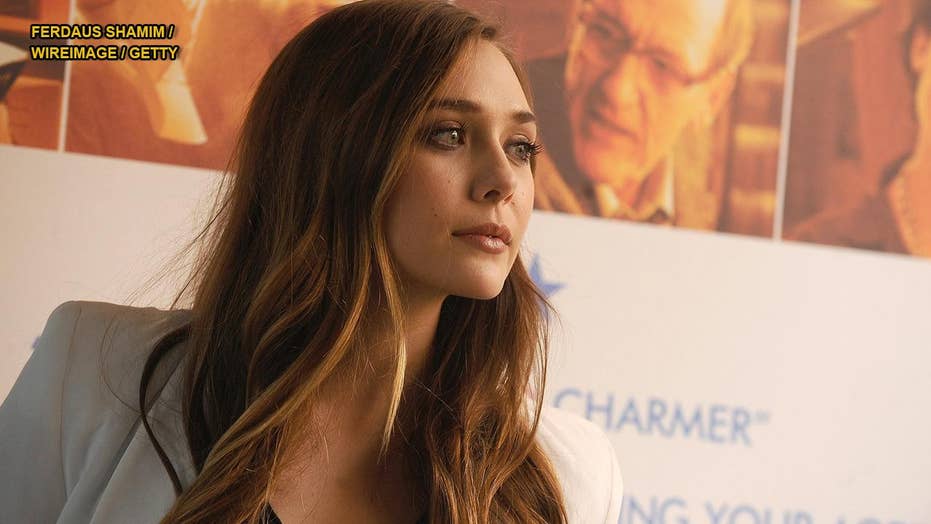 'Avengers' star Elizabeth Olsen explains why we need 'all representations of superheroes.' The actress gets candid on Season 2 of 'Sorry for Your Loss,' and her latest project involving her love of travel.

NEW YORK – Elizabeth Olsen believes now is a great time to be a superhero.

The 30-year-old, who stars as Wanda Maximoff/Scarlet Witch in the “Avengers” film franchise, is grateful that more women are bringing powerful comic book characters to life on the big screen. However, she insists the journey is not yet over and promises more blockbusters will be unleashed.

And while Olsen is gearing up to release her new Marvel series “WandaVision” in 2021, she's also launched Season 2 of Facebook Watch's “Sorry for Your Loss." The drama explores how the sudden death of Leigh Shaw’s [Olsen] husband transforms every relationship in her life.

Olsen spoke to Fox News about bringing more heroines to Hollywood, the one superpower she would love to have, getting personal in “Sorry for Your Loss” and why she’s helping to relaunch the Delta SkyMiles American Express Card portfolio (hint: Olsen can’t resist stocking up on pantry items when she’s not on set).

Fox News: How important is it to have female superheroes on the screen?
Elizabeth Olsen: I think it's important to have all representations of superheroes on the big screen, now more than ever. I feel like we are moving and we are making changes. And ... I've always just felt it's hard for me to say I have been treated so and so way because I'm a female at work because ... I've always had a lucky experience.

Elizabeth Olsen attends the premiere event for 'Avengers: Age of Ultron' at Roppongi Hills on June 23, 2015, in Tokyo, Japan. (Photo by Jun Sato/WireImage)

Fox News: If you could have any superpower in real life, what would it be and why?
Olsen: The most boring answer is the power to heal because I feel like that's just a really awesome power. But I would really, I would love to zap and appear in Florence.

Fox News: Looking back, what drew you to the role of Leigh Shaw in “Sorry for Your Loss”?
Olsen: I read the pilot about four years ago. At that moment in my life, I was leaving New York, I was going to LA, I was going through transitions, not because of… grief, but because of... a life change really. There's a specific grieving process with something that had happened and it was a character that I connected with. I feel like when you do go through very personal, massive changes… it's a very isolating experience.

I also love the tone of Kit Steinkellner, who's our creator and co-showrunner. I really love the tone and what she wrote about grief because she had a sense of humor about it and it makes it a little bit more palatable for people to see all the sides of it instead of just something that's melodramatic.

RUSSO BROTHERS FIELD QUESTIONS ABOUT THE AVENGERS DURING COMIC-CON

But I think what's been really successful with our show is people have felt connected to the character's experience and the repetitiveness and the cyclical nature of grief. I feel like that's what you want to do when you're telling any story or being a part of any project, you want people to continue the conversation. You want people to have an opinion and people have been able to do that through Facebook [Watch], which is a new streaming service. Instead of having the comments be trolls, like, the comments have been people bonding over their own grieving experiences.

Fox News: How did you channel that sense of loss for the show?
Olsen: As Jessica Lange has put it, "It's a bottomless well of sadness." I think it's one of the easiest emotions to access for whatever reason. I almost try and find the opposition of sadness. Sometimes I think anger is a harder way to feel, especially as a female. I feel like being angry is something that's a little more difficult. Sadness, I feel like it is something that's accessible. But anger was something that was more self-discovery.

Fox News: What did you take away from your character's journey long after cameras stopped rolling?
Olsen: With people around me who have lost either parents or spouses or a very close friend, I always thought, “I just don't want to bring it up because I don't want to make them upset or maybe that's awkward.”

Elizabeth Olsen says she learned many great lessons while filming Facebook Watch's "Sorry for Your Loss." (Photo by Ferdaus Shamim/WireImage)

CHRIS HEMSWORTH WAS ‘RUNNING OUT OF MONEY’ JUST BEFORE LANDING ‘THOR,’ HE SAYS

So I would avoid it. What I learned from this process and what I learned from really “The Year of Magical Thinking,” reading Joan Didion's book ... of her own experience with loss, it made me realize that people want to talk about the people that they love and that they lost. It's not something that you should shy away from. It's something that should be celebrated. So I think that's what changed for me personally with how to be better with others who are grieving.

Fox News: Was there ever a time in your career where you felt almost like giving up because things weren't going your way?
Olsen: Not in my career, I haven't felt that way. I think I sometimes get frustrated by not being available at certain times to do specific projects and that bothers me because you want to be available and in multiple places at one time. But actually, I've been very lucky.

I started working while I was studying in college, studying theater in college in New York and I started understudying and then I started working while I was a student and I was very lucky that I didn't have to ... The other struggles or struggles that you deal with within my career, I feel like the things I would complain about are things that you're lucky to be in a position to complain about.

Fox News: What's the biggest piece of advice another actor or actress gave you? One that still stays with you today?
Olsen: I think the thing that I always think about is the power of saying no is an important thing to remember. Very simple answer.

Fox News: What was it about this partnership with American Express and Delta that made you get involved?
Olsen: Well I am an unofficial Delta enthusiast already *laughs*. I fly Delta all the time in my life and now with the relaunching of the portfolio with Amex, you can get double the miles starting in January 2020 with restaurants around the world and with grocery shopping. I love cooking, so I'm constantly at the grocery store…. It's helpful for someone like me who's traveling all the time, and I also want to fly people out to visit and things like that. You get to use your miles for any of those things.

CHRIS EVANS WAS NOT A FAN OF CAPTAIN AMERICA SUIT IN FIRST ‘AVENGERS’ FILM, WRITERS REVEAL

There's one habit Elizabeth Olsen refuses to give up on when it comes to traveling. (Photo by Associated Press)

Fox News: What’s your favorite traveling tip or hack?
Olsen: I have a very specific routine where I have hand sanitizer and I have wipes. I wipe down everything that my fingers are going to touch that is on a hard surface. Then I also wipe down where my head's going to lay back. Then I always take extra immunity things. It's not fun to be sick while you're traveling.