Two people are dead in New Mexico as wildfires continue to rage across the West, burning homes and forcing residents to evacuate the area.

Fox Weather reported early Thursday morning that officials said firefighters responded to a home in the community of Ruidoso after family members said they had not heard from the elderly couple who attempted to evacuate.

Their identities have not yet been released.

The McBride Fire was fueled by winds whipping at over 60 mph, which made it nearly impossible for tactical support to fly. Some planes returned to the air as winds subsided late in the day.

Forest Service officials said Wednesday evening that seven air tankers and two helicopters have been assigned to the fire.

Crews estimated that at least 150 structures have been destroyed by the flames and the fire had burned more than 5,300 acres and was 0% contained, according to InciWeb.

The wildfires displaced thousands of residents, forced the evacuation of two schools and residents dealt with power outages due to down power lines.

Ruidoso, where officials declared a state of emergency, was hit by one of the most destructive wildfires in state history in 2012.

Laura Rabon, spokesperson for the Lincoln National Forest., said the McBride Fire jumped a road where crews were trying to hold the line.

The cause of the blaze remains under investigation, with five new large fires reported on Tuesday.

Meanwhile, nearly 1,600 wildland firefighters and support personnel were assigned to large fires in the southwestern, southern and Rocky Mountain areas, according to the National Interagency Fire Center.

The agency said Wednesday more than 21,600 acres were burning from active fires. 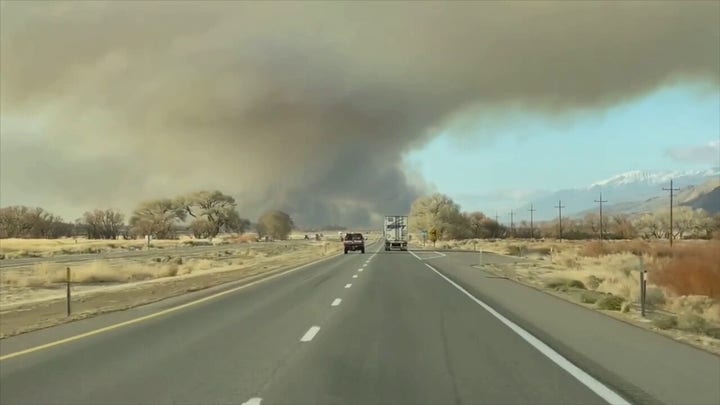 In Colorado, crews battled grass fires that forced evacuations and destroyed two homes and wildfires were also burning northwest of Ruidoso in the Lincoln National Forest, along the Rio Grande south of Albuquerque, in mountains northwest of the community of Las Vegas and in grasslands along the Pecos River near the town of Roswell.

"Those extremely dry conditions are not in our favor," she explained.

Hotter temperatures and a more than 20-year Western megadrought that studies linked to human-caused climate change have worsened wildfire season across the region.