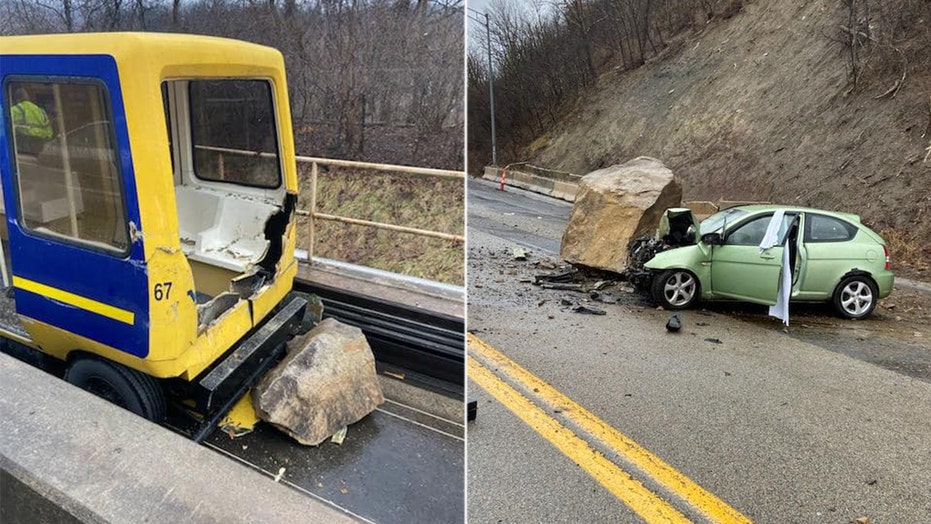 The Morgantown Police Department said in a news release that around 3:30 p.m. on Monongahela Boulevard "a very large boulder" fell from the top of the hillside across the roadway.

West Virginia was among several states that had heavy rains this week, causing flash flooding and some landslides across the South. Flooding in the state already forced school closures due to high water.

Officials in Morgantown said the boulder crashed into the path of a vehicle operated by 65-year-old Susan Cramer of Morgantown. Cramer then struck the boulder, and sustained "several severe injuries," according to police.

The rockslide sent boulders down on a highway and on the track of the West Virginia University Personal Rapid Transit system, injuring three people. (Morgantown Police Department)

She was taken to Ruby Memorial Hospital, officials said Tuesday, where she is being treated for several broken bones and internal injuries requiring surgery.

In addition to landing on the highway, officials said rock debris damaged a protective fence and scattered on the tracks of the West Virginia University Personal Rapid Transit. The rocks also hit a PRT car with nine people inside, injuring two and damaging the vehicle.

The rockslide left the driver of one vehicle critically injured. (Morgantown Police Department)

"The riders of the car were extracted by members of the Morgantown Fire Department and transported to Ruby Memorial Hospital where they were admitted for treatment," police said.

According to West Virginia University's independent student newspaper, the injured students include Maceon Wheeler, an engineering student, and Chloe Bolin, an animal and nutritional sciences student.

The WVU Western Equestrian Team posted to Facebook that Bolin's tailbone was broken.

"She has two screws, one on each side of her pelvis and a bar placed in front of her pelvis that will be there until it heals," the team posted. "Chloe is safe! We wish her good health and healing in the long road to recovery ahead."

Morgantown police said they are conducting the vehicle investigation, while the WVU Police Department is investigating the crash involving the PRT vehicle.

The West Virginia Division of Highways told WDTV-TV that rain in the past week has saturated hillsides, causing "severe flooding, mudslides, and rock slides" reported in recent days.

"The hillside where the rock fell is owned by West Virginia University," DOH officials told the television station. "DOH will be meeting with them soon to discuss the incident and assist in possible solutions."

WVU officials said the PRT system will remain closed between the Beechurst and Engineering stops as officials are still investigating the incident.